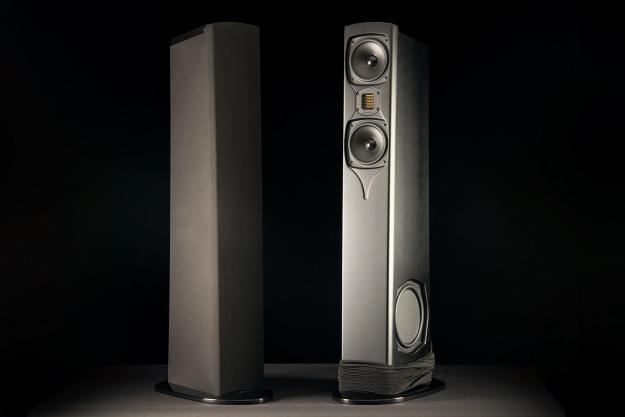 “The Triton Seven … are a stunning example of how audiophile-grade sound can come from a speaker nearly anyone can afford.”

When I stumbled upon GoldenEar Technology at CES a year ago, I was in a sort of desperate spot. While I had already seen and heard plenty of impressive speakers, amplifiers and other assorted esoteric audio gear, none of it was the sort of thing “real people” (i.e. not wealthy audiophiles) would ever consider purchasing. I needed to report in with some content, and I was running out of time.

It’s been a long time since we were this excited about a speaker.

That’s when I first bumped into Sandy Gross,  one of the most approachable audio enthusiasts I’ve ever had the pleasure of meeting, and first heard the Triton Seven, one of the most astounding speakers I’ve ever had the pleasure of hearing. In short, the Triton Seven are diminutive floor-standing speakers designed to sound anything but diminutive.

My 15-minute audition spiraled to more than an hour. I was so moved by the presentation and so shocked by the price ($1,400 a pair!) that as soon as I had said my goodbyes, I raced back to the press room to file a story about what I’d just found.

Here’s the thing, though: The equipment Sandy used to demonstrate the speakers I heard was a far cry from what the Triton Seven’s target customer would use. In the system were an Audio Research pre-amp and CD player, Pass Labs amplifiers, and some really fancy DAC I didn’t recognize. All told, the cost of the associated equipment was probably in the $40,000 neighborhood. That’s not exactly a realistic pairing. That made me wonder, did I get a realistic audition? Could the Triton Seven sound anywhere near as glorious on a $1,200 receiver or $1,500 integrated amp? I found out (hint: yes).

The Triton Seven speakers arrived double-boxed, presumably to keep them safe in transit. The outer box was lined with long sheets of Styrofoam – the sort that breaks up into little balls charged with static electricity so they stick to everything you don’t want them to stick to. We hate that stuff.

The foam did its job, though, because the inner box was in pristine shape, and inside that box we found the speakers nestled in the non-degradable EPE foam we prefer. The speakers were in terrific shape, ready to play right out of the box with no assembly required.

The Triton Sevens measure just under 40 inches tall, about 15 inches deep at the base, and the front baffle is only 6-inches wide. And with just 32 lbs. of weight to wield, placing and positioning the speakers over and over again was no problem.

In the box with the speakers we found a simple manual along with floor spikes and rubber footers for the speakers’ plinths.

No sooner had we de-boxed the Triton Sevens than our cat began to take suspicious interest in them. You see, one of the Triton series’ more attractive design points is that there is no grill frame. Instead, the entire speaker cabinet is covered in grill “socks” that run from the base up to the very top. The result is a speaker that appears to be all grill cloth, with a gloss-black plastic cap and pedestal. The only problem is that cats tend to see these as scratching posts. We promptly removed the feline and banned her from the room for the next couple of months while the Triton Sevens were in residence.

Nearly all of the Triton Seven’s design elements have some sort of effect on the speaker’s sound quality.

That top-to-bottom grill sock isn’t just for looks, though. In fact nearly all of the Triton Seven’s design elements have some sort of effect on the speaker’s sound quality. In the case of the grill sock, it’s the lack of a grill frame getting in the way that helps the speaker achieve that “grills off” sound without actually having to take off a grill.

The shape of the speaker cabinet, too, has both visual and sonic benefits. We like the Seven’s swept back look matched with a slight flare toward the base. It gives the speaker a modern look that we like, but look a little closer and you’ll see that the speaker doesn’t have any parallel surfaces – this helps reduce standing waves, which can really muddy up a speaker’s sound.

Perhaps the Seven’s most influential design point is its driver compliment. We start with a folded ribbon tweeter, a type of tweeter that squeezes sound out at listeners and is noted to produce very light and fast-acting treble. Sandwiching the tweeter at its top and bottom are two 5.25-inch mid/bass drivers. Then, toward the bottom of the cabinet, you’ll find two opposing, side-firing, 8-inch passive radiators. These bass radiators move sympathetically to the 5.25 drivers thanks to air pressure fluctuations inside the sealed cabinet, and are intended to enhance the speaker’s overall bass response.

We put the Triton Sevens through every use scenario we could muster. Over the course of our evaluation, the speakers lived in three different rooms, were paired with three different amplifiers, and served as both a two-channel music system and as part of a 7.2 home theater system. Associated equipment included a Peachtree Audio Decco65, Anthem Integrated 225, Sony STR-DA5800ES 9.2ch A/V receiver, Oppo BDP-95 Universal Disc Player, Oppo BDP-103 Universal Disc Player, Pioneer PL-61 Turntable with Ortofon OM-5E cartridge.

Placing the Triton Sevens wasn’t difficult at all, both because they are light and easy to carry and because they sounded great almost anywhere we placed them. We did manage to find a sweet spot in two of our three rooms where bass was at its most powerful. We found that the Triton Seven like no less than a foot of clearance from the wall behind them (more will be better, depending on seating position and room shape/size) and we did our best to keep two feet between the speakers and any side wall.

We have to make a special note here to say that we loved the way the Triton Sevens looked in every room they were placed. In our dedicated theater, the Sevens looked just right at home among all the electronics and glossy black boxes. But in our living area, the Sevens pulled a sort of chameleon trick, blending in with our conservative, modern décor. Truly, these speakers disappeared into the room aesthetically, an attribute which would turn out to be a foreshadowing of their sonic character.

We get more than our fair share of audio equipment passing through our halls, but it’s been a long time since we were this excited over a speaker. What the SVS Ultra series towers accomplished with sheer brawn and bulk, the Triton Sevens pulled off with speed and agility. If larger, bulkier towers are like American muscle cars, then the Triton Sevens are like compact German racers. Sure, the muscle cars pack a lot of power for the straightaway, but once you start throwing curves at them, it’s game over.

One of the things that make the Triton Sevens so special is that they are lightning fast in the treble and incredibly detailed. Recording after recording, we heard minute details that were difficult or nearly impossible to hear with other speakers, even those we would consider high performance. The creak of a piano bench, the spit-y sounds in sax’s reed, the woody sound of a drumstick hitting a ride cymbal and a bow’s etch against a viola or cello’s strings – these sounds weren’t just audible, they were apparent, and they danced across a wide image of sound.

The Triton Sevens delivered brass overtones so realistic, they literally gave us goose bumps and sent shivers down our spine.

And then there were the harmonic overtones. Sweet mercy, folks: For a brass player, there is perhaps no greater nirvana than hearing a brass instrument through a pair of speakers the same way we hear it in live performance. Unfortunately, the experience is exceedingly rare. But the Triton Sevens delivered brass overtones so realistically that we literally got goose bumps and had shivers go down our spine.

Perhaps that is why we felt like the Sevens brought us closer in to our live concert recordings than we’ve been in a long time. Sting’s Bring On The Night may have seemed like a repetitive release to some, seeing as how it came right on the heels of Dream of the Blue Turtle, but for us, this is one of the best showcases of the talent in his band, and Sting’s voice might as well have been coming from the man himself for as real as it sounded.

We also relished listening to Pink Floyd’s Dark Side of the Moon on SACD. On time, we could easily pick out each and every clock and watch because the sounds were so distinct. We’ve never quite heard such tone behind the ticks and the tocks before. And even when we were listening to the stereo recording, we felt like we were being washed in sound. That’s because one of the Sevens’ greatest attributes are their ability to create a massive and seamless soundstage. When seated in the center of a well set-up pair of Triton Sevens, it is nearly impossible to identify where the speakers are located. Just as they managed to blend in well with the décor around them, so too were they able to disappear into the room.

We got so caught up in music listening that we almost forgot to give the Triton Sevens a go at movie sound tracks. We popped in The Avengers and hit every raucous scene we could find. While the speaker’s fine attributes weren’t nearly as obvious, it was still clear they were more than up to the task of delivering an immersive soundtrack. Again, the folded ribbon tweeters lent copious amounts of detail to even the most miniscule sound effects. And their clear, open midrange made for beautiful separation between musical tracks and action sounds. Add a matching center and bookshelf surround speakers, toss in a subwoofer, and you’ve got one of the most musical home theater systems available in the under $5,000 space.

Now, for all the gushing we’ve done, you might think we’re so smitten we’re ready to call the Triton Seven the perfect speaker. Not today, sorry. For electronic and pop music where treble is mixed artificially high on recordings, the Triton Sevens were exponentially hotter. The treble was simply too much. Also, though we were able to get excellent bass from the speakers, we do feel they lack a certain element of lower-end punch that so many listeners seem to like. Yes, we realize these are smaller speakers, but they punch above their weight in so many areas, we wish the bass had followed suit.

The notion of producing high-performance, high-value speakers isn’t new, but few pull it off as well as GoldenEar Technology. The Triton Seven speakers, in particular, are a stunning example of how audiophile-grade sound can come from a speaker nearly anyone can afford. It’s been a long time since we heard so much detail from a speaker, and the soundstage the Sevens are capable of producing is marvelous in the truest sense of the word. We craved for just a bit more bass at times, and we wouldn’t dare play any EDM or over-produced pop music on these speakers, but for nearly every genre of music and for all types of movies, it’s hard to imagine a better over-all value in price and performance than the Triton Seven.