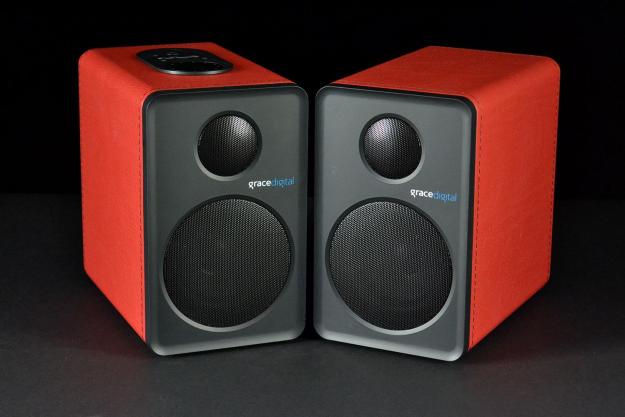 “We can say without hesitation that these little speakers offer a seriously impressive level of sonic value for their $200 asking price.”

The last time we had a piece of Grace Digital hardware in our hands, it was the waterproof ECOXBT portable Bluetooth speaker. At the time, we were wowed by the concept, but underwhelmed with the final product. Sonically speaking, the ECOXBT had a sharp touch and was further plagued with an unreliable Bluetooth connection. However, without giving too much away right off the bat, we’re happy to say the company’s latest wireless endeavor, the GDI-BTSP201 (SP201), is a whole new ball game.

The SP201 are Grace’s answer to the expanding genre of compact, wireless bookshelf speakers like the NOCS NS2, and the NuForce S3-BT – particularly the latter. With both sets employing vinyl exteriors in red, black or white, as well as similar dimensions, inputs, control panels, and more, it doesn’t take a trained eye to see the similarities. But the SP201 have some key advantages, including the new Bluetooth 4.0 protocol with aptX, as well as a bargain basement starting price of only $200 at Amazon. The obvious question to be answered was, could the SP201 hold their own when the rubber hit the road? After a several days of extensive listening, we got our answer.

While the SP201 gave us an eerily similar unboxing experience to the NuForce S3-BT, they had a less premium feel. As we pulled the red speakers from their package, they felt suspiciously light, the vinyl felt a little less luxurious, and the light plastic baffles looked a little naked without a grill covering it all up. That said, they still gave off a sleek, clean aesthetic. And seeing as the S3-BT were a hundred dollars more when we auditioned them, we still came away impressed.

At the top of the right speaker we found a digital infinity dial for easy volume control; surrounding that dial is the usual grouping of control buttons. We were also glad to find gold binding posts at the backside of the speaker, nestled below the input section. Digging inside the box, we found a power cable, an RCA to 3.5mm cable, and about 10-feet of speaker wire.

While we weren’t blown away by the SP201’s look and feel at unboxing, we found they manage to look pretty good on a shelf or desktop. The vinyl makes for a homey, set-them-up-in-your-study (if people still had studies) kind of vibe, and while the speaker cabinets are fairly deep, they’re still far more compact than the boombox speakers of yore.

…while the speaker cabinets are fairly deep, they’re still far more compact than the boombox speakers of yore.

The right speaker is the input and control hub. As mentioned, the control center is inset at the top of the speaker which, apart from the volume dial, includes a standby/source key, a Bluetooth pairing button, a play/pause key, and a song search toggle button. The back of the speaker houses the system’s single RCA Aux input, a USB port for charging your smartphone (always nice if you’ve got a spare cable), the aforementioned gold binding posts, and the main power switch. Both speakers also include a single bass port at the back.

Sound for each speaker is handled by a 1-inch dome tweeter, and a 3.5-inch composite cone woofer, driven with 35 watts of total system power. The frequency range is claimed at 50Hz-20kHz, and Grace Digital publishes a frequency response chart that is about as flat as you’ll see in a system at this price level, which had us intrigued.

What the system lacks is a remote, though we acknowledge that a re-design would be necessary to utilize it. Powering the speakers on and off requires using a physical switch (a real turn-off for the devices when power is cycled). That means every time you want to use them, you must physically power them on, and initiate connection from your Bluetooth device. It’s not a huge issue – in fact some might consider it a bonus – but it is something to be aware of.

After spending some quality time with the SP201 system, we can say without hesitation that these little speakers offer a seriously impressive level of sonic value for their $200 asking price. Even before we recalled the published frequency response, we got a distinct impression of transparency from the speakers as they blasted a powerful burst of distortion-free sound across their spectrum with agile accuracy. At times, there was an edgy cut to the attack of midrange instruments, but for the most part the little blocks belted out a full, brilliant expanse of stereo sound that outperformed their pintsize frames.

…cranking the speakers…brought enough thunder to get us in trouble with the downstairs neighbors.

The first track we auditioned was “The Shankill Butchers” by the Decemberists, and right away we were treated to firm definition in the vocals which bloomed from a well-defined center image. The vocal track was accompanied by clean, rounded acoustic guitars with a jangly, gypsy-style clink to the tambourine. In fact, the upper register remained a highlight throughout this track as the speakers reliably delineated high synths and percussion with vivid clarity.

In the first few hours, we detected some light coloration to the SP201’s sound signature which was particularly well-revealed by the infamous snare drum loop that kicks off Michael Jackson’s “Billie Jean.” On this cut, the riff had a taught click that was too thin for our taste. However, after giving the speakers some ample break-in time, we re-visited the track and found ourselves much more focused on the display of dynamic expression in the string swells and the fluid nature of the reverb that shot out to the left on Michael’s echoed “do think twice!” lyric.

Bass was fuller than expected. When we auditioned some hip-hop and reggae tracks, the low kick hits and bass grooves came through with plenty of force. In fact, cranking the speakers to about 75 percent not only displayed the SP201’s integrity at high volumes, but the bass brought enough thunder to get us in trouble with the downstairs neighbors, invoking a strangely satisfying pounding on the floor from below. The confrontation was all the more impressive since these babies are sized more appropriately for a computer desk than a family room. In fact, our only real issue with the bass was that it could get a touch boom-y at times, and we wished we could spread some of that power to warm up the midrange a bit, especially on classic recordings from artists like the Kinks or the Rolling Stones.

While the speakers were impressively precise, sometimes we longed for some more detail and depth in deeply complex productions. Most of the information came through, but the level of texture and dimension came up shy of what we’d call hi-fidelity when we put it to the test with artists like Radiohead and Daft Punk. Still, that’s getting a little critical for speakers at this level, and we had many more pleasant surprises than disappointments in genres ranging from electronic and pop tracks, to classic recordings from the 40’s and 50’s.

While many are leaning towards single-unit systems for their wireless audio fix, separated speakers like Grace Digital’s SP201s prove that true stereo separation and a convincing soundstage can be had without taking up tons of space or breaking the bank. And considering all the other perks these little speakers have to offer – including a crystal-clear sound signature, potent and distortion-less high volumes, and extremely reliable wireless performance – they make a great argument for spreading things out a bit. For those looking for an affordable wireless system, or even a set of computer speakers that keep it small, simple, and powerful, we highly recommend considering Grace Digital’s GDI-BTSP201’s.