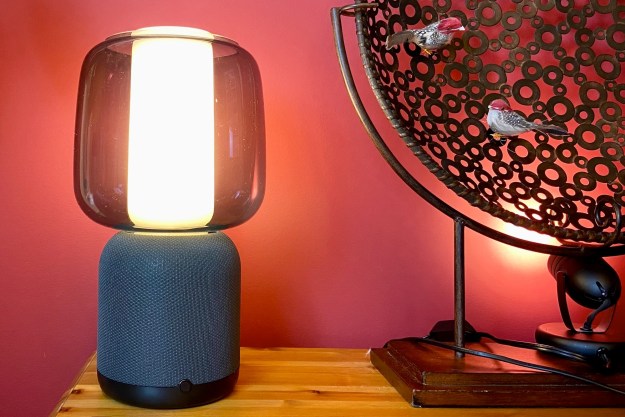 I’m still not convinced that putting a wireless Sonos speaker in the base of a table lamp is a great idea, but if you want to disguise the source of your music, the new version of Ikea’s Symfonisk Table Lamp is probably the easiest and most affordable way to do so.

Here’s a quick look at this quirky little guy.

The first version of the Symfonisk Table Lamp, which debuted alongside the Symfonisk Bookshelf Speaker, struck a lot of people as kinda funny-looking. The combination of the potbellied body and the bulbous, frosted glass lampshade gave it a mushroom-like look, and it reminded me a lot of Sackboy, the protagonist in Sony’s LittleBigPlanet series of PlayStation games.

Ikea apparently took careful note of this reaction and has given the second-gen lamp a more sophisticated (read: more conservative) design. The plastic saucer that housed the play controls on the first version is gone. The base is wider yet shorter, and the frosted lampshade has been replaced with two new options: A large, two-piece hurricane-style glass shade and a fabric shade. Our black review unit was accompanied by the glass shade option.

Ikea also saw fit to delete the almost comically large plastic knob that protruded from the side of the original. It looked like it was both an on/off switch and a dimmer for the light bulb — but it only switched the light on and off. It’s been replaced by an almost invisible electronic button at the very bottom of the base. It’s a much cleaner look, but it comes with a small penalty. The original knob had two physical positions. If you had it in the “on” position and there was a power outage, as soon as the power came back, the light bulb would turn back on.

But the new version doesn’t have that physically locked-in mode. A power outage will turn off the whole lamp. And when the power comes back, the lamp will be in its powered-down mode. Now, you might say: “So what? Just turn it back on.” But if you use one of Ikea’s smart home Tradfri light bulbs, as the company suggests that you do, you won’t be able to control the bulb again until you walk over and physically turn it on again. That’s not very convenient.

That small annoyance notwithstanding, the result of the changes is a piece of decor that I think a lot more people will want in their homes. Instead of drawing curious glances, it simply looks like a table lamp, which after all, is the whole point.

Those saucer-mounted play controls didn’t disappear, but they were relocated — to the backside of the base. As part of the effort to make the Table Lamp Speaker more lamp and less speaker, it works. There are virtually no telltale signs that this is anything other than a lamp. But from a usability point of view, it’s not as friendly. Unless you want to walk around to the back of the lamp (which, depending on the placement, you may not be able to do), you’ll need to use those controls by feel alone. Not that it’s hard: The shape of the buttons helps a lot, with a flat surface for play/pause/track skip, a convex surface for volume up, and a concave surface for volume down. It’s the same scheme as on the recently introduced Symfonisk Picture Frame speaker.

Ikea also sensibly realized that the tiny candelabra light socket it put on the first version didn’t give people a lot of options in terms of light bulbs. The new E26/27 socket fits pretty much any standard bulb, though you should definitely heed the warning label: No incandescent or halogen bulbs, or you risk “SEVERE THERMAL DAMAGE.” Stick with a maximum 15-watt LED bulb and you should be fine. Ikea includes a 4.3 watt, 450-lumen LED bulb to get you started.

Simpler setup, thanks to Sonos

Sonos, the brain behind the acoustic and software side of the Symfonisk lineup, has made an already dead-simple setup even easier. Plug the Table Lamp into the wall using the included, braided power cord and then fire up the Sonos S2 app. It will automatically recognize the new speaker and prompt you to finish setting it up, something that takes all of 30 seconds thanks to Sonos’ clever use of the NFC chip inside your phone. Just tap your phone to the back of the speaker when the app tells you to, and that’s it. And iPhone users get the added benefit of AirPlay 2 built-in, which means you can skip the Sonos app entirely if you want (but don’t — the Sonos app is awesome, especially if you own more than one Sonos-compatible product).

From a sound point of view, the Table Lamp also has undergone another change. Neither Ikea nor Sonos has gone into great detail on the topic, but it’s impossible not to notice that the speaker produces a more diffuse, less directed sound than the first version. It was said when the original model debuted that its internals were a close match for the now-discontinued Sonos Play:1. In testing, they certainly sounded a lot alike.

But the new version doesn’t sound like the Play:1 or its replacement, the Sonos One SL. Those speakers tend to produce a focused beam of audio. Turn them away from you and their sound changes. The Table Lamp, on the other hand, is much more forgiving, with a decidedly ambient quality that spreads the sound around the room.

This is both good and not so good. The good part is that you can literally place the Table Lamp anywhere and its sound won’t change much. There’s still a front and a back, but the sound radiates in a more circular pattern. For people who only intend on having a single speaker in a given room, whether it’s a living room, office, or bedroom, this is a good thing — the new version fills your chosen space more effectively than the original. But the same acoustic properties that push the sound in more directions also reduce clarity, especially in the higher frequencies.

Ikea only sent me the one lamp to try out, so I couldn’t test stereo pairing (Sonos is very strict about this — only two acoustically identical Sonos products are allowed to be stereo-paired), but my guess is that the more open signature of the Table Lamp won’t create as precise a sense of stereo imaging. If that kind of thing matters to you, you may be better off with a set of Sonos One SLs.

Don’t take that as a heavy critique — as with all Sonos speakers, the Table Lamp still sounds really good, with a bigger and bolder presence than its size would suggest. Warm and resonant bass provides that all-important big-speaker sound, and despite a bit of muddiness in the higher end, there’s still plenty of definition in the middle and upper midranges. You can also get this thing to go really loud, with only the barest hints of distortion right at the top of the dial.

While a table lamp that doubles as a wireless speaker may not be for everyone, Ikea has made the concept more appealing by giving Symfonisk buyers more design choices and a less controversial shape. If you’re looking for an affordable way to add great sound to your home without adding visible speakers, the new Symfonisk Table Lamp is a very good solution.

Topics
Ikea’s new Symfonisk Table Lamp speaker lets you mix and match lampshades
Ikea leaks details of its next Sonos Symfonisk Table Lamp
Ikea’s $199 Symfonisk Picture Frame Speaker lets you hang your tunes on a wall
Google Pixel Buds A-Series hands-on review: Same buds, way better price
The best HDMI cables you can buy in 2023
The best speakers for 2023: great hi-fi options for music and more
The best Blu-ray players for 2023
Why the Nest Hub Max still rocks as a kitchen TV
Stream live sports without cable with Sling — now 50% off
OnePlus Buds Pro 2 to support Android’s new spatial audio feature
Should you mount your TV above a fireplace?
Walmart has a 50-inch TV deal for under $200 today
Disney Plus Free Trial: Can you watch for free in 2023?