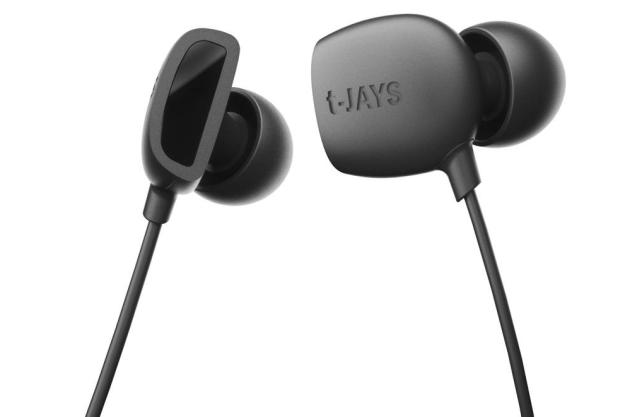 We’ve had a good record with Swedish based Jays headphones ever since we first tried a pair of its earbuds way back in ‘09. The company seems to have a knack for making quality headphones at a relatively low price, perfect for those who desire more from their headphones than what the stock iOS earbuds provide, but don’t want to go broke in the process.

The latest model of Jays to come across our desk is the t-Jays Four, a strikingly similar design to the Three we reviewed a few years back, but with some shiny new upgrades. The Four comes in just below $130, making them the most expensive pair of Jays we’ve gotten our hands on. Wondering whether Jays’ latest design lives up to its lineage, we plugged in the Fours and took them out for an in-depth trial. Read on for the results.

As has always been the case with Jays’ product packaging, getting at the Fours was only slightly less involved than opening one of those cryptex thingies from The Da Vinci Code. Peeling away a sticker at the back revealed a small hinge that we had to poke at for several minutes with a key while prying on the top of the case to release its shell. Once inside, we discovered two rows of replacement ear tips above the hammerhead shaped ‘buds. Some more prying on the half-moon shell at the bottom of the case revealed a thin cable along with an extension piece, both wound tightly together. A small cable clip completed the package, with no ¼-inch jack or airplane adapter included.

As mentioned above, those familiar with the Four’s predecessor will find many similar design traits on this latest iteration, with a few added touch points. Like all of Jays’ models, the Four is all black, layered in soft matte plastic. Flat plates designed to hold the headset firmly in the ear extend from the back of the plastic buds, accented with chrome panels on the exterior that bring a touch of flash to the design. The removable silicone tips at the opposing side of the earbuds surround the Four’s relatively large 10 mm dynamic drivers.

About six inches below the right earbud sits a sturdy 3-button iOS control microphone wrapped in solid plastic with a metal casing. Following the two pronged cables further down to their convergence point reveals a small piece of glossy plastic which can be drawn up to bring the two sides together.

We were surprised to discover that the Four’s Kevlar-reinforced cable terminates at a paltry two feet in length. Though the added extension piece brings the full length to a little over 4 feet, we wished the main cable was a bit longer on its own. We were also a bit disappointed to find the Four’s input jacks cased in silver instead of gold, and we experienced a bit of noise and some sound cut-out when first joining the two cables.

Comfort was perhaps the biggest issue we took with the Four. Though we appreciated the firm fit provided by the extension plates, they fit too snugly in our ears, causing some immediate discomfort. Following the advice of Jays’ website, we flipped the buds over, which immediately relieved the tension. However, the secondary orientation forced us to wrap the cable over our ears, which placed the iOS mic awkwardly close to our right jaw. Though fit will vary from person to person, it’s something to be aware of before you blindly order a pair of Fours – or any in-ear for that matter.

We auditioned the Four the same way we do most earbuds – by listening to a wide array of music genres, directly from our iPhone 5. What we found was a thunderous amount of power in the low end, matched by a pleasantly light and airy upper register. There was a heavy line drawn between the two sounds, almost like a dramatic crossover point between a stereo’s main speakers and a powerful subwoofer. At times we wished we could scoop some of the warmth and power from below, and distribute in more evenly throughout the mids and treble. That said, for the majority of our listening, the two struck a civil, if not totally even balance, creating a pleasant overall sound signature.

The Four did their best work reproducing music in which the instruments had deep, textural timbres.

The Four did their best work reproducing music in which the instruments had deep, textural timbres. Though the detail of the music wasn’t where we expect it to be on an elite headset, more overt instruments came through with keen resolution. One prime example was “Gold On the Ceiling”, by The Black Keys. Though the bass was a bit heavy, the Four did a fine job rendering the gritty, saw-toothed edges of the retro keyboards and electric guitars, digging out grizzly buzzes and fat overtones.

That light and shimmering midrange also did well with our acoustic tracks, bringing a taste of brilliance to acoustic guitar and fiddle. We wished for a bit more bravado in the midrange at times, especially in the lower midrange, but there was a delicacy to the sound that could be pretty gorgeous, especially when rendering female vocal harmonies. We did experience a few moments in which the very lowest bass lines got a bit out of hand, but only on a select number of songs did we find it overbearing.

Hip-hop may be where many listeners find the headset’s Four-té (yeah, we went there). For an in-ear at this price, there’s an impressive amount of punctual force and power down there in the nether regions. Artists like B.I.G. and Jay-Z were wrought with a good deal of gravity, without getting too wild for the lighter treble to handle.

Jays’ t-Jays Four strike a good balance between affordability and quality sound, exhibiting a brilliant upper register matched by powerful low end force. The fit was an issue for us, and the headset doesn’t expose the level of granular detail you’ll find in slightly higher-priced competitors like the Audiofly AF-78, but if your ears fit the mold (or the mold fits your ears), the t-Jays Four are a solid choice for clarity and power in the mid-tier price.