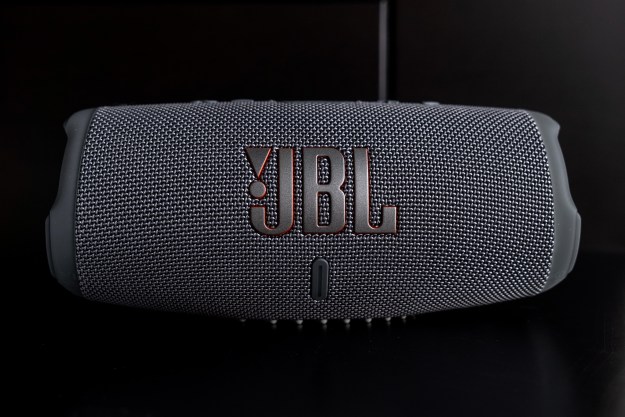 “Everyone will hear the JBL Charge 5 once you start cranking it up.”

Look for a Bluetooth speaker and you’re going to find a variety of sizes to choose from. It’s up to you to decide which one best fits your lifestyle, but when you have a lot of options, finding the best value isn’t always easy. JBL’s speakers come in varying sizes, and one of their core features is to play bigger than they seem.

That’s where the JBL Charge 5 comes in. It’s midsized, and packs a punch, but in tweaking some things in both design and functionality, did JBL change too much about how it sounds? Let’s take a look.

You won’t find much to wade through in the box. Other than the speaker itself, JBL only throws in a USB-C charging cable and quick start guide. If you’ve used previous Charge speakers, you may be wondering where the 3.5mm Aux-In cable is, and it’s not here because JBL removed that port. This speaker is totally wireless.

JBL does not reinvent the wheel with the Charge 5, sticking to a very familiar look that doesn’t differ too much from the previous version. I’m largely referring to the aesthetics, where outside of the more pronounced logo and battery indicator at the front, plus the rubberized grips at the bottom, many of the same elements apply.

The weight and dimensions are negligibly different compared to the Charge 4, except the 5 is more ruggedized.

The tightly woven fabric still looks and feels great, while the bumpers on each side protect the passive radiators. The button layout at the top stays the same, while the back features the USB-C charging port, along with a USB-A port you can use to charge other devices, basically turning the speaker into a power bank.

The weight and dimensions are negligibly different compared to the Charge 4, except the 5 is more ruggedized. Rather than maintain the previous IPX7 rating for water resistance, JBL added good dust resistance for an excellent IP67 rating instead. That includes saltwater and sand, so this speaker fits in as well at the beach as it does around a pool or tub.

Its overall size makes it a little too big to be highly portable. You could throw it in a bag and take it along for a ride, but it’s definitely not something you’ll want to carry around for a prolonged period. It doesn’t have a handle or any indents to make it easier to carry around, but it is the kind of speaker you could take with you on a trip or from one room to another with relative ease.

It was easy to pair the Charge 5 from the start, and I did notice an upgrade in connectivity. The Charge 4 ran on Bluetooth 4.2, while the Charge 5 uses 5.1. That shift does help stabilize the connection, and plays a key role in why audio doesn’t stutter as you move further away from the speaker.

It can also pair with two devices at one time, but is no help with calls because it isn’t a speakerphone. There’s no microphone, which means you also only hear what your voice assistant says and still have to speak into your phone to issue commands. Pairing with two devices simply lets you switch from one to the other when you want to hear what they’re playing.

The JBL Portable app (formerly the Connect app) for iOS or Android offers limited features, but a key one that wasn’t there when the Charge 5 first launched is three-band EQ. It’s modest in scope, with bass, mids, and treble available, each with five levels you can slide and adjust. You might think it’s overkill for a JBL speaker, but you might also find this speaker more restrained than it looks. I found better results when tilting the mids up, but if you want more rumbling bass, you could always max that out.

PartyBoost returns, and it sticks with the same formula, which is to say that you can pair the Charge 5 with other PartyBoost-compatible JBL speakers to play music simultaneously. If you want to stereo pair for left and right channels, you do need to pair it with another Charge 5. Bear in mind that once you turn PartyBoost on and connect with another speaker, you lose the EQ, and the connected speakers revert to the default sound profile.

I installed a firmware update while I tested the Charge 5 that presumably had an impact on audio quality, particularly focusing on the bass. I never got to test the Charge 4, so I can’t be sure of any upgrade on that front, but the Portable app’s EQ can take the sound to greater depths when you start to tinker with a balance that works for you.

It’s a resonant speaker in that its sound carries further than you might expect.

The good news is that doing so makes an audible difference. You don’t get a JBL speaker for hi-res audiophile sound. The Charge 5 only supports the AAC and SBC Bluetooth codecs anyway. When you’re just looking for a sound that makes tunes play loud and clear, the Charge 5 can certainly take you there because of how loud it can go. Distortion starts to set in at really high volumes, but holds off enough before you get there to keep a group or crowd entertained.

It’s a resonant speaker in that its sound carries further than you might expect. In smaller rooms, you don’t necessarily have to push the volume too high to feel it. You might look at this as purely relevant for bass-heavy music genres, but I would argue that’s not really true. There’s enough here to enjoy pretty much anything you like listening to, and the EQ, while limited, gives you some flexibility to tailor it how you want.

That bodes well for parties and barbecues and people with eclectic tastes. No one there would expect perfection from a speaker like this, but they would probably be surprised at how much they can hear it while standing further away.

JBL rates battery life at up to 20 hours per charge, but don’t expect to reach that. Had JBL kept the 3.5mm Aux-In port, that might’ve been likely, except Bluetooth and volume are the determining factors. I didn’t have to go too loud all that often, so my mileage usually hovered around 15 to 17 hours. Not bad at all, except that if you run out of juice, it takes up to four hours to fully charge it up again. You can also plug in to charge while it’s playing when the battery gets low if you can plant it near a wall outlet or keep a power bank handy.

The speaker’s own power bank feature plays its own role in battery life. If you use the included USB-C cable and turn it the other way to plug in the USB-A side to the rear port to charge something else via USB-C, you naturally sap some of its life for playback.

You can find the Charge 5 for $180, which is a pretty standard price for a midsized speaker like this. Whether its size and price are a sweet spot for you depends on your needs and budget, but your money definitely buys loudness that works well. Its extra durability stands out, too, making it versatile in terms of where and when you choose to play it. There are also six colors to choose from, including the standard camo finish.

Given the limited differences between it and the Charge 4, it’s not a bad idea to consider the latter as an option, especially if you want a 3.5mm jack. The Ultimate Ears MegaBoom 3 is more expensive at $200, but offers serious durability and more spatial 360-degree sound, plus color options.

If you care more to use a speaker at home, rather than one you take with you on trips and outings, you could look into the Sonos Move. It’s portable enough to move from room to room, but isn’t the kind of speaker you want too close to any body of water. And if you don’t value its smart speaker or whole-home audio capabilities, its $400 price tag is hard to justify.

JBL makes its speakers to play loud without breaking down, so it’s a good bet you can keep it around for a long while. The biggest worry is water or salt somehow damaging the internal components, which you can avoid if you rinse off any sand or salt after a day at the beach, JBL has a one-year warranty to cover damage, but read the fine print on water damage, as the company may not cover every case.

Yes, especially if you don’t already have a speaker like it. This isn’t the kind of product you upgrade on a yearly basis. You get it and hang onto to it for as long as you need. I would think twice before doing so if you already have the Charge 4, where the upgrade probably won’t feel as significant.

What is Spotify? Music, pricing, and features explained
What is aptX? Cutting through the clutter of Qualcomm’s codecs
The best Dolby Atmos soundbars for 2022
Ultimate surround sound guide: DTS, Dolby Atmos, and more explained
You can get an Apple TV for $59 for Cyber Monday if you’re quick
Cyber Monday: This Samsung 85-inch TV just got a massive price cut
65-inch Sony OLED TV is $700 off for Cyber Monday, and it’s selling fast
Perfect for a bedroom or kitchen, this 32-inch TV is $108 for Cyber Monday
Get these Sony wireless noise-canceling headphones for $68 today
Walmart has a Bluetooth speaker for $39 in its Cyber Monday deals
Amazon’s superb Echo Studio speaker is just $155 for Cyber Monday
Save $1,000 on this 85-inch Sony Bravia 4K TV for Cyber Monday
Cyber Monday Deal: Samsung’s Freestyle Portable Projector is $300 off