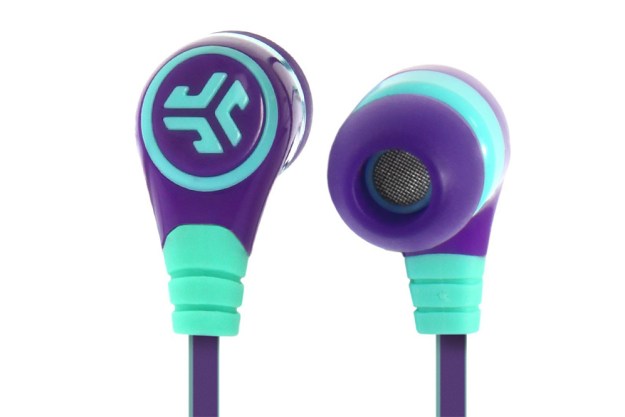 “Though some may be attracted to the funky style and color patterns the Diego offers, we feel JLab might have fared better if it spent more time on the acoustical design of these headphones.”

JLab Audio manages to stand out in a crowded market of personal audio products with some unique product designs and brand philosophy. Having recently made a move to San Diego, CA from Tucson, AZ, the company adopted its own version of the “SoCal” lifestyle with flamboyant product designs and its casual company motto: “We Hook it Up so you can Rock it Out.”

It is in that vein that Jlab released its latest pair of budget in-ear headphones, the $20 Diego ear buds and mic. Affectionately referred to as “the joker headphones” around our office, the set of Diego ‘buds we received certainly make a statement with their brash purple and turquoise color scheme. But for us, style ultimately takes a back seat to performance, so we were curious as to whether or not the Diego could make an aural statement as bold as its visual one. We always enjoy a good “hook up,” so we decided to see how well the Diego would actually “Rock it Out.” Here’s what we found.

For as much effort as JLab puts into the design and upbeat “vibe” of their gear, you’d think it would put some of that enthusiasm into its packaging. But we found the delivery of the Diego to be surprisingly lame. We get that these are inexpensive ear buds, but the Diego’s plastic and foil package with bombastic graphics plastered across the face looks like a pack of licorice someone got out of a candy machine in Sweden. Tearing the bag open we removed the ‘phones, a small selection of ear tips in differing sizes, a clip, and some marketing material – but no candy.

Aside from the “Miami purple” and “mint” colored ‘phones we received, the Diego are available in three other eye-popping color combinations: black and gunmetal grey; yellow and grey; blue, white and black. Each headset is further decked out in multiple variations of its color pattern, with sporty lines running the length of the cables and outlining the earpieces. Also on each earpiece is a JLab logo, comprising a circle of three letter “J’s.” The headphones’ cable is flattened to prevent tangling, and includes an in-line, single-button mic on the right-hand cord for making and receiving phone calls with a Smartphone – a nice bonus at this price point.

No matter which of the various ear tip sizes we tried, we had a hard time getting the Diego to fit correctly. We finally settled on the largest size, and we were able to get them to stick for a time, but inevitably they slipped out. We spent a lot of the time listening to the Diego while either holding the cable, or wrapping it around our necks to relieve some weight. Perhaps our ears were the problem? If so, it would be a first. Regardless, we found the issue annoying.

We began our testing by exploring the rock section of our music catalog. Right away, we noticed a very shrill snap to the treble. The extreme frequency response curve gave percussion a pronounced tinny and flattened character, creating a synthetic feel that made the percussion parts sound as if they were being played on a cheap Casio keyboard. Cymbal crashes were as shrill as breaking glass, and each strike of a drum came across as weak clips of sound with little depth. This piercing treble issue played out with other types of instrumentation as well. As we listened to “No Name #2” from Elliott Smith’s record, Roman Candle, we heard acute sibilance in Smith’s vocals, and a sharp bite from the string noise of his acoustic guitar.

As we moved on through our music catalog, the harshness of the top end – particularly with percussion instruments – continued to be a common theme. On Wu-Tang Clan’s Enter the Wu, the treble seemed to jab at our ears. From the sound bites of old kung-fu movies in the intro, to the harsh snapping snare of the groove, the bright tone continuously drew our attention. While we found there was ample bass on many tracks, it seemed to be lazily spread out in a fog, with no real punch or definition. In fact, we noted constant balance issues across the spectrum.

We experienced an occasionally enjoyable moment in the 2Khz area while listening to track feature guitar and piano, especially on some of our older recordings. But on the whole, the Diego’s drivers seemed to reproduce only a skeletal remnant of a recording’s sound – they preserved the basic melodies and instrumentation, but left the meat of the dimension and timbre on the table.

We never assume we’ll have an amazing audio experience with a $20 pair of headphones, but the Diego still fell short of our expectations. We’ve heard some pretty decent sound from other JLab gear, including the recently released Bombora – an over-the-ear headphone we are currently reviewing. But the Diego failed to deliver any notable detail or balance, and their extremely bright mid range and sharp treble made them hard to listen to on some tracks. Though some may be attracted to the funky style and color patterns the Diego offers, we feel JLab might have fared better if it spent more time on the acoustical design of these headphones. For those looking for an inexpensive set of ear buds, we suggest taking a look at the JVC HA-FX40 instead.