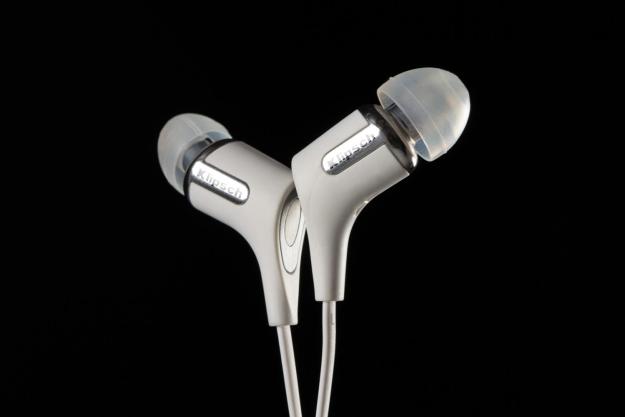 “As well-balanced and sweet-sounding as you’ll find in a $100 in-ear headphone.”

One thing we’ve learned from testing hundreds of headphones over the past few years is that the point of diminishing returns holds steady at $100. You can spend more than that, but improvements tend to be incremental and, to some, negligible. The road leading up to that price point is littered with a lot of garbage, though – the chasm that exists between most $50 headphones and those that cost double that amount is considerable.

That being the case, we’re always on the lookout for the next great pair of ‘phones at or around the $100 mark. And we’re happy to report that we’ve found them. While not perfect in every way, Klipsch’s Reference R6i are one of the most well-rounded pairs of in-ear headphones we’ve tested yet. Better still, Klipsch has the kind of distribution muscle that will make the R6i easy to find and test out so you can see if they are right for you.

We pit the R6i against some of our favorite $100 in-ears to help lend some perspective around how they fare against the competition. Along the way, we discovered the R6i’s one glaring weakness, which active, sporty types will want to be aware of. Still, at the end of the day, the R6i turn out to be a big win for Klipsch.

The R6i are packaged so that a single earbud and an inline three-button microphone marked with Klipsch’s logo are all you see. That inline mic is worth noting, as the ‘i’ in the model number stands for iOS compatibility.

Klipsch sent us a pair of R6i in “iPod White,” but a black version is also available. In the box with the headphones we found a compact, zippered carrying pouch and a clever little card with three pairs of alternate silicone eartips and a security clip mounted to it. The card is a great solution to the hassle of having eartips floating around all willy-nilly, and it fits right into the pouch with plenty of room left for the R6i themselves.

The R6i use Klipsch’s patented oval-shaped eartips, which we can attest provide both superior fit and comfort. For those with particularly difficult-to-fit ears, Klipsch does provide one set of double-flanged eartips, which may better fit those with ear canals that narrow quickly.

We’re also big fans of the slight forward angle Klipsch builds into its in-ear headphones, which allows for a slightly longer driver enclosure without the ‘buds sticking too far out of the ear. The R6i also use a rubbery silicone exterior, which keeps the earphones feeling soft and secure in the ear.

Unfortunately, we’re not as wild about Klipsch’s choice of headphone cable as we are about its eartips. The flat, “tangle-resistant” cable doesn’t like to conform very easy, so it can be a little unwieldy at times. On its own it isn’t a deal-breaker, but the cord is also especially loud. If you’ve ever had your headphone cable scrape against your clothing and heard some thumping sounds, then you know what we’re talking about. Except the R6i seem to be especially bad in this area – they could just as well be a stethoscope for all the noise they make when touched. This could be a problem for those who do a lot of moving around while listening, whether it’s just washing the dishes or running a marathon. Fortunately, the clothing clip Klipsch includes can provide some relief in this area.

We compared the Klipsch R6i to one of our favorite little pairs of ‘buds, the NOCS NS400 (titanium and aluminum versions), as well as the Jays a-Jays Five and Audiofly AF-56. We also kept our pair of the $400 NuForce Primo 8 around, just to see how close the R6i would get to one of our favorite pair of in-ear headphones.

The R6i grabbed us right away. Even without making any direct comparisons we could tell the Klipsch provided a level of detail that came dangerously close to the high-end Primo 8, and, more generally speaking, just seemed to get everything right from the top on down.

They could just as well be a stethoscope for all the noise they make when touched.

Once we did start making some comparisons, though, our favorable first impressions were cemented. The R6i dish up a healthy serving of deep, tight bass, while stopping short of getting out of hand. There’s certainly a little bump in the low end, but it’s just enough to bring a robust sound to the table without crowding the low midrange or creating any droning resonance that gives bass a sort of “one note feel.”

On the other end of the spectrum, the R6i produce delicious, sparkling treble that yields lots of detail and overtones (especially with wind instruments) without getting screechy or aggressive. In fact, we pushed the R6i with some of our most sibilant recordings, and while they did sizzle a bit, we never found the sound to be harsh. Actually, the R6i’s treble treatment was never anything short of inviting. Over the course of our evaluations, we kept coming back to how much we really enjoyed the R6i’s top end, and any time we had to stick another earbud in, we found ourselves eager to go back to the R6i.

We found evaluating the R6i’s midrange prowess a little tricky at first. Initially, it seemed that the mids were a little recessed — and they are to a degree — but their laid-back attitude toward voices and turbo-charged electric guitars was made to seem much grander than it actually is by the rather midrange-forward comparison in-ears we had on hand.

For example, the NOCS NS400 have just a little more slap in the upper mids that gives them a sense of clarity with voices, and makes them a little more aggressive when they get to playing around with snare-drum strikes, drum-stick transients, and the bite of a saxophone’s reed or glare of a trumpet. By comparison, the R6i were more laid back in the upper mids, but we never felt like we were missing anything, and indeed, the R6i just felt better balanced overall.

While the R6i can’t pull off the sort of stunning accuracy that the NuForce Primo 8 use four balanced armatures to attain, they do some pretty fancy tricks on their own. For one thing, they tend to add an element of warmth to recordings that might otherwise sound sterile or stale. It’s almost like they take the old RIAA equalization curve developed for turntables, and apply that attitude toward digital music. There’s meatiness to the sound that gives your ears something to gnaw on, while they dazzle from above with sparkling treble etched with detail.

Klipsch’s R6i blend comfort, style and convenience into an earbud with an approachable sound quality that anyone can recognize as excellent. Were it not for a noisy cable, we might be looking at a near perfect score. Still, we think the R6i are about as well-balanced and sweet-sounding as you’ll find in a $100 in-ear headphone.

Topics
YouTube TV: plans, pricing, channels, how to cancel, and more
Klipsch follows the success of The Fives with The Sevens and Nines powered speakers
The best waterproof Bluetooth speakers for 2023
BluOS will be updated to 4.0 with a fresh look, new features
Perfect for the Super Bowl, Samsung’s Frame TV is $1000 off
Save 40% on Peacock Premium when you subscribe today
How to watch Super Bowl 2023
The best movies on Hulu right now (February 2023)
The Super Bowl is finally in Dolby Vision – if you have Comcast
Go big or go home: this 85-inch Samsung 4K TV is $300 off
McIntosh’s new $8,000 AVR: gigantic power, with a Dolby Atmos catch
The best shows on Disney+ right now (February 2023)
The best outdoor TV antennas for 2023