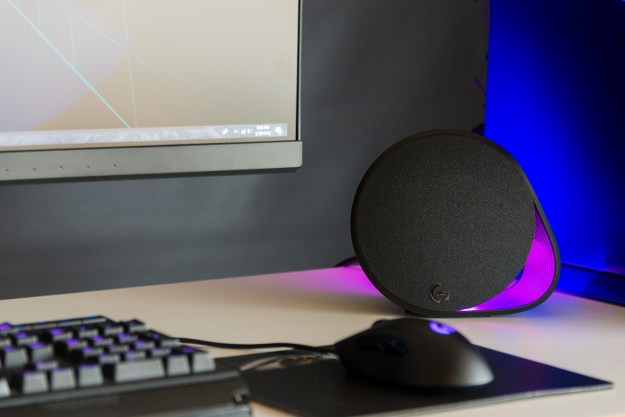 Back in 2013, Logitech moved its G-Series gear into the new ‘Logitech G’ sub-brand (one of five under the company’s umbrella), signaling a newfound dedication to developing top-shelf tech for PC gamers.

Since then, the G family has expanded to include numerous mice, keyboards, and other peripherals built to optimize your gaming experience, and look awesome doing it. The new G560 speakers reflect this philosophy, packing an abundance of unique features into a powerful 2.1 setup. We spent some time evaluating them, and as we expected, they’re pretty impressive.

The box for the G560 was bigger and heavier than we expected. Turns out, that’s thanks to the hefty subwoofer, which measures a whopping 16 inches tall and weighs more than 12 pounds.

The stereo speakers are smaller (about 6 x 6 x 5 inches) and weigh just a few pounds each. They’ve got a cool, distinctive design featuring circular grilles mounted in oblong plastic casings with a brushed finish. Each speaker is equipped with two LED “RGB zones” (read: light arrays) – one below the grille, which shines through the front of the speaker, and a spotlight in the rear designed to project light on the wall behind your monitor.

The right speaker hosts three buttons on top, including one for customizable macro controls and two for volume adjustment. On the back is a 3.5mm jack, a power button, and a Bluetooth pairing button, which allows you to connect up to two source devices simultaneously via Bluetooth.

Once you remove the speakers from their typical cardboard armor, there’s not much work to be done. Plug the subwoofer into the wall, and plug the speakers into the sub. Next, simply connect the sub to your computer via either the 3.5mm Aux input, or the included USB cable (we recommend the latter for full functionality), download the Logitech Gaming Software if you don’t have it already (you’ll need version 8.98.198 or newer), and you’re ready to start gaming.

Before we get to the sound, we should discuss the G560’s most prominent and standout feature, the RGB light arrays. With the software – the same software you’d use to customize any other Logitech G gear – you can control all four zones individually using Logitech’s Lightsync technology. If you want to assign each zone a static color, you can do that, but that’s just the beginning.

Logitech has built lighting presets for more than 600 games.

Logitech has built an open software development kit (SDK) for the G560, which means developers can utilize the kit to add contextual light effects based on in-game events. For example, while playing Fortnite the speakers will turn from soft green to bright purple if you find yourself lost in a storm, while your speakers will glow orange as your health dwindles in Battlefield 1. The list of supported titles is currently short – other notable games include Counter Strike: Global Operative and Grand Theft Auto V – but we expect it to grow over time.

You might wonder, “Well, what about every other game?” Logitech has also equipped the G560 with a “screen sampler” mode, which allows you to select four rectangular areas on your screen and assign those areas to one of the four RGB zones (based on whatever color appears most in the selected area). If your health bar is in the bottom left corner, for example, you can select that area and the corresponding light will change from green to red (or whatever you select) when your health depletes. This allows for some pretty sweet customization, though the hue shifts can get a bit hectic if you’re running around a map in a first-person game.

Logitech has also built lighting presets for a vast number of games – more than 600, by our count – which can be accessed in the software. We did get a little confused at the difference between those presets and the games supported via SDK, though, and the software doesn’t do a very good job of explaining any of this.

There’s also an “audio visualizer” setting, which you can use to make the lights react to the game sound. Rather than using a microphone, the speakers actually draw any audio signals from the connected computer; treble and midrange frequencies trigger the front zones, while lower frequencies will trigger the rear zones. This mode seems better suited for listening to music than gaming, but it’s a cool feature.

If you’ve got more Logitech gaming gear, you can even synchronize LED activity across all your devices for a really immersive setup. There are also more mundane modes which will “breathe” (fade a single color in and out) or morph through the whole rainbow at your chosen speed, similar to many gaming headsets.

As you might expect, all these features (save the fixed colors, “breathing,” and color morph) require a USB connection – they won’t work over Bluetooth or aux connection.

The LEDs can serve as bias lighting to reduce strain on the eyes of those who spend hours in front of their monitors, too.

The G560 are capable of reaching a peak of 240 watts, a fact that is immediately obvious upon plugging them in and starting up a game. The claimed frequency response extends down to 40Hz on the low end (extending to 18kHz up top), and the default setting is fairly bass-heavy. The downward-firing subwoofer produces truly bombastic explosions and gunshots, but you can fiddle with the custom EQ to your heart’s content if you’re looking for more balance.

No matter how you set them up, these speakers pump out powerful sound.

No matter how you set them up, though, these speakers pump out some powerful sound. You won’t find the same sparkling highs as you would in, say, the $400 Aperion Allere, but the G560 are half that price, and you’re probably buying them for gaming, in which case they’re superb.

Playing through battle scenarios in Battlefield 1, tank treads rolled with such thunderous crunches that we practically felt the ground shake beneath our feet, and machine gunfire crackled like heavy-hitting Fourth of July fireworks. The bass isn’t particularly tight, but it’s big, and should sate most gamers’ thirst for oomph. As an aside, there’s no manual bass control on the subwoofer or the speakers. While this isn’t an issue if you keep the software open, it would have been a welcome inclusion.

The G560 do also support DTS:X surround sound signals (though not for Mac), which you can toggle in the software and even adjust each digital channel’s volume. The virtual surround functionality works pretty well for a 2.1 setup — not as well as actual surround speakers, but good enough for the cost and system size.

The G560 occupy a unique niche. As speakers, they’re good – not spectacular, but good – but as complements to a Logitech gaming cave, they’re quite impressive. Even without more G gear, they have a lot of potential, thanks to the open SDK which allows for serious customization that should increase over time.

If you’re considering the G560 because of their awesome lights and synchronization capabilities, there aren’t really many contemporaries. The $150 Razer Nommo Chroma are similar, sort of, but they don’t come with a subwoofer and they’re just not quite the same.

If you just want some good computer speakers for watching shows or listening to music, consider the Edifier Luna Eclipse or the cheaper Logitech Z337.

While the satellite speakers’ build quality isn’t outstanding, the G560 are probably going to sit in one place for several years. The cables are woven and durable, so we don’t expect any issues for quite a while.

If you want some cool, unique gaming speakers (and especially if you have some compatible Logitech G peripherals), then yes. Buy them.

Victrola’s new turntable is a plug-and-play vinyl solution for Sonos fans
The best speakers for 2022: great hi-fi options for music and more
The best Roku TVs of 2022: which should you buy?
The best wireless earbuds for 2022
Denon updates 8K AV receivers with prices starting at $399
2022’s best TVs for under $1,000
Amazon saw 15.3 million watch Thursday Night Football on Prime Video
How to watch Pittsburgh Steelers vs. Cleveland Browns on Thursday Night Football
Thursday Night Football stream struggles continue for Prime Video
The best 4K TVs for under $500: premium picture on a budget
Nothing teases its next wireless earbuds with photos of a lipstick-like case
Best new movies to stream on Netflix, Hulu, Prime, HBO, and more
The 70 best movies on Amazon Prime Video (September 2022)