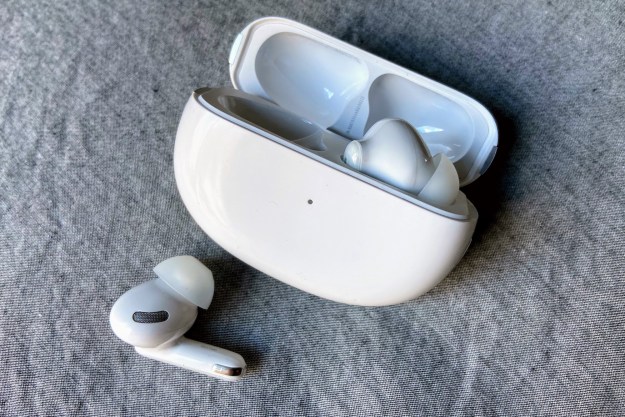 “About the only thing that Oppo hasn't copied from the AirPods Pro is the price.”

Oppo, the Chinese electronics company that has produced some of the biggest sleeper hits in categories like Blu-ray players and smartphones, has just released its latest true wireless earbuds, the $150 Oppo Enco X. Digital Trends was given an early look at the earbuds, which won’t be available in the U.S. until the spring. Yes, they look a lot like Apple’s AirPods Pro and they sport active noise cancellation (ANC), just like Apple’s buds. But don’t write them off as yet another imitator hoping to ride Apple’s coattails to a payday at the checkout screen. The Enco X are the real deal, with a much-deserved emphasis on both words. Let’s check ‘em out.

With the exception of its black plastic inner tray, the Enco X’s box is a simple cardboard container that should prove easily recyclable if you choose not to keep it. Inside, you’ll find the earbuds, their charging case, a short USB-C charging cable, two extra sizes of silicone ear-tips (small and large to accompany the default medium), plus a quick start guide.

If you dig Apple’s vibe, you will love the way these buds look.

The Enco X don’t just look a little like the AirPods Pro — I’d call them as close as you can get without incurring Apple’s legal wrath. Especially in white (they also come in black), the bulbous main housing, semi-oval silicone tips, and downward-pointing stems are all direct copies of Apple’s design. Which is to say, if you dig Apple’s vibe, you will love the way these buds look.

But Oppo’s flattery of Jony Ive’s aesthetic doesn’t end there. The charging case is also pure AirPods Pro, right down to the perfectly articulated hinge and the LED charging indicator on the front face. Sure, there are a few differences. Oppo has wrapped its case in a slender aluminum band that lends it a touch of extra sophistication, and the pairing button sits ever so slightly proud of this band on the side, instead of sitting flush on the backside as Apple did. That button could end up being pressed accidentally, which wouldn’t be ideal, but the real head-scratcher in Oppo’s design is the decision to orient the earbuds with the tips facing away from each other. This means that every time you pluck them from the case — which is easiest to do if you pinch the silicone tips between your thumb and forefinger — they’re facing the wrong direction for your ears.

Why did Oppo do this? Maybe it was to avoid the accusation of a total Apple carbon-copy, or maybe the Enco X’s slightly longer stems made it necessary.

There’s one area of the Enco X’s design that actually improves on Apple’s work: The Enco X are rated IP54, which means they’re just as water-resistant as the AirPods Pro, but they throw in some dust-resistance, too.

The AirPods Pro are some of the most comfortable true wireless earbuds I’ve tried and (surprise) the Enco X offer an equally pleasant fit. There’s even a fit test inside the free HeyMelody app for Android (an iOS version is coming soon), yet another AirPods Pro feature to add to the list. I had to switch to the large size ear-tips to get a perfect fit, but even the default mediums were pretty good. As long as you don’t mind having buds seated in your ear canals, the Enco X are comfortable enough for many hours of continuous use.

The earbuds use a touch control interface. I’m normally not a big fan of touch controls. I find them imprecise and I dislike the lack of the click feedback that physical buttons offer. But the Enco X might make me a convert. Taps on the stems registered almost every time and you can adjust the volume by sliding your finger up or down the length of either stem, something you still can’t do on the AirPods Pro.

The HeyMelody app lets you customize these controls, update firmware, and adjust the ANC (more on this later).

The Enco X don’t support Bluetooth multipoint (which lets two devices connect to a set of earbuds simultaneously) but the pairing feature is so fast it almost doesn’t matter. A two-second press on the pairing button and you can quickly connect to a new device, or reconnect to a previously associated one.

Even better, inside the HeyMelody app, you can assign a long-press command that automatically switches the earbuds back to the last connected device, a feature I’ve never seen before on a set of wireless earbuds. It worked like a charm, and let me seamlessly switch between my iPhone and Pixel XL.

Full and rich, with a bass response that is powerful but never overpowering, they deliver a well-balanced sound signature.

The wireless range on the Enco X is about average at 30 feet outside, which ends up being closer to 15 feet indoors. Within those distances, the connection is very reliable.

I won’t beat around the bush — the Enco X sound really good. Full and rich, with a bass response that is powerful but never overpowering, they deliver a well-balanced sound signature. The soundstage strikes a middle ground between intimate and expansive.

When compared to similarly priced products like the Soundcore Liberty Air 2 Pro or even the AirPods Pro, the Enco X more than hold their own. It’s not until you compare them to more expensive products like the Jabra Elite 85t or Sony WF-1000XM3, that you start to notice limitations. The Enco X can’t quite keep up with these earbuds when it comes to clarity and precision, especially in the higher frequencies.

When I realized that the HeyMelody app doesn’t offer any EQ adjustments, I was a bit concerned — I tend to make slight tweaks to most earbuds to get a sound profile that suits me. However, now that I’ve spent some time with these earbuds, I don’t miss that lack of EQ control at all and I’m confident you won’t either.

Another observation that caught me off guard: The Enco X sounded better when used with my Pixel XL test phone than with my iPhone 11. This is something of a mystery. Generally speaking, I don’t hear much difference between iOS and Android, especially when streaming from the exact same source (in this case, Tidal HiFi). And even though there’s no Bluetooth codec advantage (the Enco X use AAC when connected to both phones) I found that stereo imaging, clarity, and soundstage were all improved when using the Pixel XL.

The Oppo Enco X have the rare distinction of being some of the best noise-canceling earbuds you can buy.

Speaking of codecs, it’s possible that the Enco X could sound even better when used with Oppo phones that support LHDC, a low-latency, high-resolution Bluetooth codec that competes directly with Sony’s LDAC and aptX HD. The Enco X are some of the first true wireless earbuds on the market to ship with LHDC support.

The Oppo Enco X have the rare distinction of joining the AirPods Pro, Bose QuietComfort Earbuds, and Jabra Elite 85t as some of the best noise-canceling earbuds you can buy.

Not only do they do an excellent job of reducing unwanted sounds like traffic, conversations, and the droning hum of machinery while listening to music, but they also deliver an impressively quiet cone of silence when there’s no music at all.

Transparency mode is equally effective and performs that magic balancing act between amplifying the outside world enough that you can hear it, but not so much that it sounds like you’re listening to a recording of the outside world.

It’s not perfect: I found that while other people’s voices were clear and distinct, my own voice still felt a tad muffled. But it makes conversations easy, which is the whole point.

Within the HeyMelody app, you can choose which ANC modes are available when you touch and hold an earbud. You can toggle through all four modes (off, transparency, regular ANC, and maximum ANC) or any combination of them. I found max ANC and transparency to be the most useful.

ANC mode changes are as quick as on the AirPods Pro, but not as fast as the Elite 85t.

If there’s one area where the Enco X could improve, it’s battery life. Oppo claims four hours per charge when the volume is at 50% and you’re using maximum ANC, which tops out at 20 hours when you include the charging case. Turning off ANC bumps this up to 5.5 and 25 hours, respectively.

From what I can tell, these numbers are slightly conservative. I ended up with close to 4.5 hours between charges with ANC on. Once again, the Enco X seem content to replicate the AirPods Pro — these battery life stats are almost the same as Apple’s — though in this case, the AirPods Pro deliver slightly better longevity.

In my original review, I pointed out that one feature Oppo should have mimicked is the AirPods Pro’s fast-charge feature, because according to all of the official specs, the Enco X do not have this ability. However, shortly after we published, Oppo reached out to let us know you can fast-charge the Enco X — it’s just not quite as fast as the AirPods Pro. Five minutes in the charging case will extend the AirPods Pro play time by an hour, but the Enco X need 10 minutes in their case to acquire the same amount of play time.  From empty, it takes 80 minutes to fully charge the earbuds in their case.

While not as crystal-clear as earbuds from Bose or Jabra, the Oppo Enco X nonetheless have very good call quality. Competing sounds like passing car traffic were very effectively suppressed. My voice would occasionally waver and flutter, but it was always intelligible.

Throwing legal caution to the wind, Oppo has created a nearly perfect clone of the Apple AirPods Pro, with better sound quality, and a much lower price.

As long as Oppo can keep the Enco X’s price at around the $150 mark or less, these earbuds have no serious competition at all.

You can get better sound quality and more features, but you’ll need to cough up another $50-$80 — the Jabra Elite 85t come to mind. You can certainly spend less and still get ANC — like the Edifier TWS NB2 — but these earbuds won’t meet the Enco X’s very high bar for ANC, and design.

Even iPhone owners may want to seriously consider the Enco X before buying a set of AirPods Pro. The Enco X can’t let you speak to Siri hands-free, and they don’t support Apple’s spatial audio feature, but that might seem like a fair trade for being able to save $100.

The Enco X appear to be very well built, with high-quality materials and workmanship. At the time of this review, U.S. warranty information wasn’t available, but I expect these earbuds will hold up to regular use as well (or better) than comparable models.

Absolutely. If the idea of the AirPods Pro appeals to you, the Enco X are cheaper and they outperform Apple’s buds in sound quality.