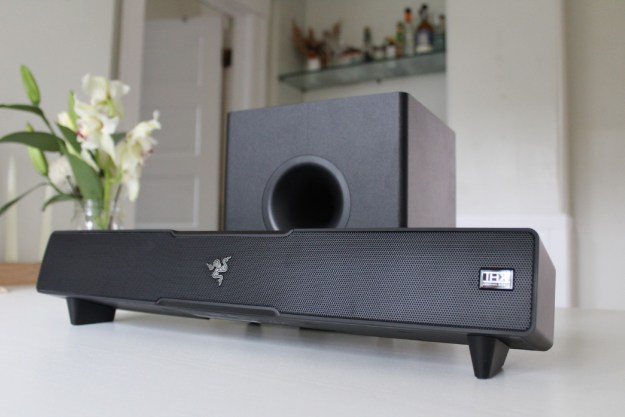 In living rooms, soundbars have become commonplace. But connected to your PC on your desk? That’s still a bit of a novelty, especially with the proliferation of excellent wireless headsets out there.

But after seven years of silence, Razer has finally announced a sequel to its Leviathan PC soundbar: The Leviathan V2. As one of the few options out there, the Leviathan V2 offers a streamlined design, two additional passive radiators, customizable RGB lighting, and the inclusion of THX Spatial Audio.

Is that enough to bring PC soundbars into the mainstream? Probably not. But at $250, it’s not a bad way to equip your PC gaming setup with some better audio.

The Razer Leviathan V2 is a 2.1 audio solution, meaning you’ve got a pair of speakers squished into one with a stand-alone subwoofer to put below your desk. It’s all meant to sit below your monitor, and as long as your monitor has height adjustment, that shouldn’t be too hard.

It’s an attractive little soundbar, too. The drivers are enclosed behind an aluminum speaker grille, which is housed in a matte black finish with a Razer logo in the center. Compared to the original, Razer has straightened some lines and reduced the accents, making for a cleaner and more modern look.

You don’t need to be all-in on Razer gear to appreciate this speaker’s styling.

That’s especially true compared to a speaker like the LG Ultragear GP9, which really emphasizes its gaming pedigree with its design. You don’t need to be all-in on Razer gear to appreciate this speaker’s styling.

Along the bottom of the soundbar’s edge, you’ll find a strip of LED lights, which add a splash of RGB goodness to your desk, in case you didn’t already have enough. It’s fairly restrained, though, offering just a glow around the base of the speaker, with 16 zones of customizable color, all of which can be customized in Razer Synapse. It’s a nice touch. Strange to think that the original Leviathan didn’t include lighting like this of some kind.

The soundbar maintains a fairly small profile, too, at just 19.7 inches wide. Depending on the size and shape of your monitor’s base, though, it may be tricky to find a perfectly flat spot for it to sit. I didn’t have that trouble plopping it under the ultrawide Alienware 34 QD-OLED. In fact, an extra-large or ultrawide monitor is a great example of why a soundbar might make more sense than a pair of computer speakers.

Behind the speaker grille, you’ll find the same speaker setup as before: Two full-range drivers and two tweeters. The drivers themselves are bigger this time around — 33% bigger full-range cones and tweeters that are one millimeter larger, too.

The Leviathan V2 also benefits from adding a pair of rubber passive radiators in the back, each measuring 135 mm wide.

Lastly, you’ll find two replaceable feet along the bottom, which prop the Leviathan V2 up off the desktop surface. The default ones are flat, but the angled feet are significantly better, because they point the audio up at your face instead of at your shoulders.

The stand-alone subwoofer has gotten a similar redesign to the soundbar itself. It’s still a decent-sized down-firing speaker but has grown to five and a half inches. The finish is now a textured matte black, matching the soundbar. It’s attractive — as much as a black cube can be.

The rubber feet on the bottom are sturdy too. If your office is without carpet, this thing won’t slip around or easily tip over.

One of the advantages soundbars have over traditional speakers has always been ease of setup. Even a simple 2.1 system involves more wires hanging across your desk. Setting up the Razer Leviathan V2 is a breeze, much like other PC soundbars.

The soundbar has just three ports on the back. One cable runs down to the subwoofer, the other is for power, and the USB-C port is for connection to your PC. That’s it. The subwoofer doesn’t need its own power, and Razer includes all the cables in the box, including the USB-C to USB-A cord.

The lack of a headphone jack is a shame.

Unfortunately, that also means there are some significant limitations to what you can do with the Leviathan V2. The previous model included an optical port, as well as a 3.5mm headphone jack. Other competitors, such as the Creative Sound Blaster Katana V2, also include HDMI ARC, which makes it possible to connect to other systems.

The lack of a headphone jack, in particular, is a shame. While connecting over Bluetooth 5.2 is fast, it’s a missed opportunity to provide an excellent DAC (digital audio converter) to improve the experience for headphone wearers.

The Leviathan V2 takes a similar approach to controls, including just five buttons across the front: Power, Bluetooth pairing, volume up, volume down, and input switching. All of that does exactly what you’d expect. The input switcher is particularly handy if you need to quickly throw audio between your wireless headset and the soundbar.

I would have also loved to see some more EQ controls on the soundbar itself, though. The Razer Nommo speakers included a handy bass knob that would have been a good addition to the Leviathan V2. Other options like the Panasonic SoundSlayer Speaker and Katana V2 even include a remote, which the Leviathan lacks.

Razer sidesteps the need for a remote by offering a mobile app, available on both iOS and Android. The app allows you to

The minimalist approach taken by the Leviathan V2 emphasizes the simplicity of the design. But it’s hard not to be jealous of the Katana V2, which includes a forward-facing headphone jack, built-in microphone, digital read-out, HDMI ARC, optional wall mount brackets, six customizable buttons, and remote control. If you want superior customization and control of your audio, the Razer Leviathan V2 is not for you.

Of course, nothing matters more in a soundbar than actual audio quality. There’s a lot of good to report in this regard. In-game, I found myself pleasantly surprised by how good this soundbar is at recreating the surround sound experience.

I toggled on “3D Sound” in Fortnite and found myself absorbed by sounds that seemed to come from all around me: Gunfire from enemy to my right, the shimmering sound of a chest hiding nearby, and a shark splashing in the water up ahead. None of that will feel new if you’re used to playing games with a decent gaming headset, but it feels much more natural and immersive using the Leviathan V2.

The increased frequency range when connected over USB, now supporting 45Hz up to 20kHz, ensures you’re not missing anything in the mix. Meanwhile, the stand-alone subwoofer provides the punchy bass that systems like the LG GP9 just can’t. There’s plenty of volume here, too – more than enough to fill a big room, and then some.

With music, though, the results are less impressive. The mix feels messy, probably because both sets of speakers are pushed right up against one another. The stereo image just isn’t as clear and separated as I wanted it to be, especially when you compare it to a set of standard 2.1 speakers like the Logitech G560. It’s amazing what just a few inches of space on either side can do to widen the soundstage.

In almost all cases, I preferred to have THX Spatial Audio turned on.

THX Spatial Audio, which the soundbar proudly promotes, is Razer’s solution to this problem. The feature uses beamforming to trick your ears into thinking you’re hearing more channels than you really are. Some of this is subjective, but I found that it helped in a lot of the songs I tested it on. The wall of sound in George Harrison’s “My Sweet Lord” sounds intricate and pronounced, while the delicate bass grooves and percussion of Thundercat’s “Uh Uh” really come to life.

In almost all cases, I preferred to have THX Spatial Audio turned on. Just the same, though, I just think a decent pair of 2.1 computer speakers will have provided a better music listening experience.

But if you want a pair of excellent gaming speakers, you won’t be disappointed by Leviathan V2. It’s just not a product for audiophiles. That’s especially true when you dig into some of Razer’s EQ presets available in the Synapse app. They were all far too strong for my tastes. The Music setting, for example, removed too move of the bass and lower-mids, while the Game setting left in-game music sounding pitiful.

Fortunately, you can set up a custom setting available to set up a more nuanced EQ that suits your preferences. Either way, there’s no way to switch between presets without pulling up the Synapse app, so you’re probably best off leaving it on the flat “THX” preset.

If you’re skeptical about the idea of putting a soundbar under your monitor, let me put your concerns to rest: It works. It totally does, and the Razer Leviathan V2 is one of the better options out there, especially for this price. I wish it had more ports, controls, and customization, but the beautiful design, solid audio quality, and clutter-free setup more than make up for its bare-bones approach.

The Creative SoundBlaster Katana and Katana V2 are this soundbar’s closest rivals. The original Katana sells at the same price as the Leviathan V2, while the Katana V2 costs $80 more.

If you want to opt for a more traditional set of PC gaming speakers, Logitech’s G560 provides excellent audio (and lighting) — and currently sells for less than the Leviathan V2.

Unlike a lot of tech, you can expect an audio product to last you longer than even five years. Using the latest Bluetooth 5.2 connectivity helps in that regard, as does the Leviathan V2’s excellent build quality.

Yes, if a plug-and-play audio system delivers decent sound right out of the box. If you can afford to pay an extra $80, you’ll likely enjoy the extra customization and ports that the Creative Katana V2 provides, but for a cheaper and simpler plug-and-play experience, the Leviathan V2 is a solid option.

Sonos announces $279 Ray Soundbar and its own voice control