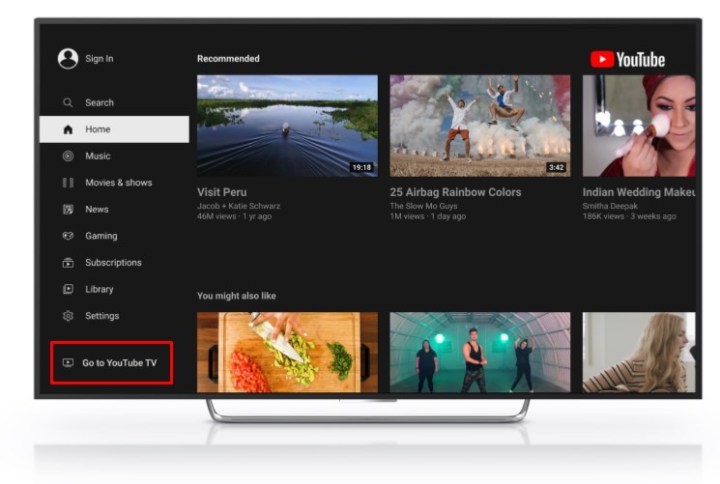 In late April, Roku made the decision to pull the YouTube TV app from its channel store, effectively denying it to any Roku user who wants to add it to their streaming device. It also prevented any Roku users from creating a new subscription to the Google-owned live TV streaming service.

It was the opening salvo in a very public contractual dispute between Roku and Google. On May 7, in an apparent attempt to limit further damage that might be caused if Roku elects to remove the YouTube TV app entirely, Google began updating its regular YouTube app on Roku with the ability to access YouTube TV content if you’re a YouTube TV subscriber.

Digital Trends reached out to Roku for a statement, but we did not receive a response. However, a Roku rep did provide the following statement to Variety:

Google’s actions are the clear conduct of an unchecked monopolist bent on crushing fair competition and harming consumer choice. Roku has not asked for one additional dollar in financial value from YouTube TV. We have simply asked Google to stop their anticompetitive behavior of manipulating user search results to their unique financial benefit and to stop demanding access to sensitive data that no other partner on our platform receives today. In response, Google has continued its practice of blatantly leveraging its YouTube monopoly to force an independent company into an agreement that is both bad for consumers and bad for fair competition.

Google’s latest move won’t necessarily be Roku-only. Perhaps out of an abundance of caution, Google says it will expand the update “to as many devices as we can over time.” This could be a sign that Google foresees similar contractual disputes occurring with other platforms, or it may be Google’s way of indicating that it isn’t using this strategy as a way to hammer Roku in particular.

Should Roku decide to escalate the fight even further following this development, perhaps by yanking all of YouTube’s apps or somehow preventing YouTube TV access from within the YouTube app, Google is working on a contingency plan: “We’re also in discussions with other partners to secure free streaming devices in case YouTube TV members face any access issues on Roku.” Google hasn’t indicated which streaming devices will be provided, but it would probably be the new Chromecast with Google TV.

If that seems like an overreaction, consider that on April 26, Roku sent an email to its users warning them that the situation could result in the total removal of the YouTube TV channel from the Roku platform.

“We are disappointed that Google has allowed our agreement for the distribution of YouTube TV to expire,” A Roku spokesperson said in an emailed statement. “Roku has not asked for one dollar of additional financial consideration from Google to renew YouTube TV.”

The statement goes on to say that Roku asked Google for four contractual commitments: No manipulation of consumer search results, no access to data not available to anyone else, no forcing Roku to accept hardware requirements that would increase its consumer costs by leveraging Google’s YouTube monopoly, and no acting in a discriminatory and anticompetitive manner against Roku.

Google has issued a response on its YouTube blog to both Roku’s claims and its removal of the YouTube TV app from the channel store.

“We’ve been working with Roku to renew our deal to distribute YouTube TV on their devices,” the blog post said. “Despite our best efforts to come to an agreement in the best interests of our mutual users, Roku terminated our deal in bad faith amidst our negotiation.”

The post goes on to say that Google is encouraging Roku not to take the additional step of removing the YouTube TV app from its customers’ devices, It also denies many of the claims Roku has made.

Google characterizes one claim in particular — that Google made requests to access user data or interfere with search results — as “baseless and false.”

After Roku sent the initial email to its users, a Google spokesperson responded to some of Roku’s comments, saying: “We have been working with Roku in good faith to reach an agreement that benefits our viewers and their customers. Unfortunately, Roku often engages in these types of tactics in their negotiations. We’re disappointed that they chose to make baseless claims while we continue our ongoing negotiations. All of our work with them has been focused on ensuring a high-quality and consistent experience for our viewers.”

The spokesperson also noted that “we have made no requests to access user data or interfere with search results. We hope we can resolve this for the sake of our mutual users.”

The initial report of the dispute came from Axios, which enumerated the demands Roku claims were made by Google:

A possible further stipulation, according to the report, is that Roku must use certain chipsets or memory cards that would result in increased prices for its hardware. Now that Google sells its Chromecast with Google TV for $50, a price that undercuts all but two of Roku’s products (the Roku Express and Express 4K), this could, in theory, wipe out the price advantage that Roku enjoys on its least expensive devices.

“Google is attempting to use its YouTube monopoly position to force Roku into accepting predatory, anticompetitive, and discriminatory terms that will directly harm Roku and our users,” a Roku spokesperson told Axios.

Google claims that it simply wants Roku to adopt open-source video codecs, without which people won’t be able to watch YouTube in 4K HDR or 8K even if their Roku device supports these video formats.

This isn’t the first time that Roku has experienced contractual friction with one of its streaming service partners. Over the past few years, the company has had disputes with HBO Max, NBCUniversal’s Peacock, and, in 2020, it had to craft a last-minute deal with Fox in order to give its users a way to stream the 2020 Super Bowl.