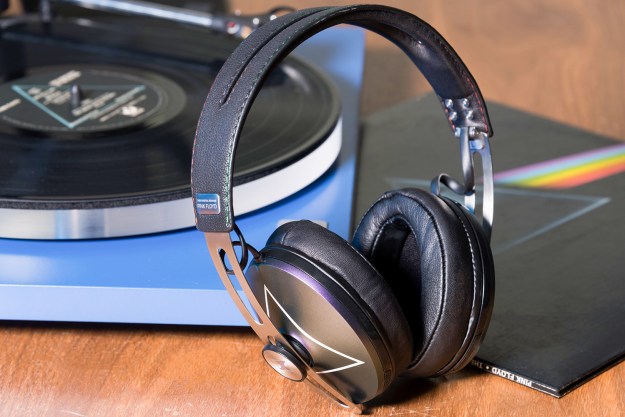 “With stylish good looks and premium performance, the HD1 Wireless are further proof that Sennheiser is the leader of the headphone pack.”

With the removal of the headphone jack from Apple’s iPhones (among a growing list of other devices), there’s never been a better time to go wireless. Released in 2015, Sennheiser’s Momentum 2.0 Wireless headphones have long resided among the top wireless choices, offering a sterling mix of style, performance, comfort, and noise cancellation. For those expecting to see a Momentum 2.0 Wireless headphone review, you’ve landed here because Sennheiser has simply rebranded the popular cans in the U.S., Canada, and Australia, and dubbed them the Sennheiser HD1 Wireless.

Virtually nothing else has changed, however, proving that Sennheiser not only knows how to put out a product with staying power, but that the brand is also loath to mess with a good thing. In fact, aside from a labeling tweak or two, everything about the HD1 Wireless remains the same as the Momentum 2.0 Wireless — including the rather stout $500 MSRP. As such, we were happy to grab a review unit with a little something extra in Sennheiser’s HD1 edition Pink Floyd, which offer a striking aesthetic for classic psychedelia fans. Perhaps what’s most remarkable, though, is that even two years on, Sennheiser’s Momentum-turned-HD1 Wireless headphones remain among the best in their class, offering the timeless sound and style Sennheiser fans have come to know and love.

(Editor’s note: This video was created for the Sennheiser Momentum 2.0 Wireless. Rebranded as the HD1 in some regions, virtually nothing has changed but the name. All features noted and general evaluation apply to both pairs of headphones.)

The HD1 Wireless brandish a minimalist design that walks the tightrope between modern chic and vintage classicism. The oval-shaped earcups glide smoothly along the thin band, layered in plush padding, while hinges allow the cans to fold in for portability. The Pink Floyd version we received bring some extra flair as well, including a color-changing paint job that ripples from purple to gold in the light, reggae-colored stitching along the band, and the same light-prism design made famous by the band’s classic album, The Dark Side of the Moon. The design was created to celebrate the band’s Their Mortal Remains exhibition at London’s Victoria Albert Museum.

Accessories riding along with the HD1 Wireless include a felt case with stitching along the edges, cables for plugging in directly to a source, as well as charging the cans from a USB port, and an airplane adapter.

While the Pink Floyd version stand out in any setting, the standard HD1 Wireless are crafted with just enough flavor to draw the eye without detracting from the minimalist design, which reminds us of a neoclassical version of the kind of cans used by a 1940s radio operator. The HD1 exude quality from all angles, from the rippled leather along the headband, to the sparkling rivets along the interior, and the holographic “S” flashing along the ball-joint that keeps the earcups in place. Alongside the Pink Floyd edition, the headphones currently come in black and ivory for now, though more options may be on the way.

If you’re going wireless, noise cancellation is part of the package.

The HD1 Wireless’ earcups are lined with thick memory foam pads cloaked in soft leather, encircling a felt-lined interior. A simple control system is ebedded into the right earcup, including a power/pair button, and a multifunction switch that controls volume, song skip, and play/pause. The growing trend of building touch controls into the earcup itself wouldn’t work with this design, but that’s fine by us — the buttons offer a more tactile, reassuring experience anyway.

Even for 2017, there’s plenty of modern tech built into these aging cans, including Bluetooth 4.0 with aptX, which is designed to offer CD-quality sound from compatible devices. The efficient signal helps to achieve an impressive battery runtime of up to 22 hours — still putting the headphones among the top in their class — as well as near-flawless wireless connection. Firing the headphones up queues a British voice, decidedly more classy than Siri, who illuminates with phrases like “headphones connected.”

Sennheiser’s NoiseGard active noise cancellation employs four exterior microphones, while the VoiceMax dual-omnidirectional microphone is designed to take care of ambient noise during phone conversations. However, that same mic, which is designed to allow you to hear your own voice so you don’t speak too loud, creates an odd echo effect that can be distracting. It’s not a major issue if you don’t talk on the phone a lot, but it’s something worth noting.

While there isn’t a lot of padding to the headband, the headphones’ extra cushioning in the earpads makes them fairly easy to wear for extended periods. We’d take more padding up top if Sennheiser asked us, but the cans are light enough to make it a nonissue for most applications.

Wireless connection is excellent, and the HD1 Wireless allow you to forget your phone is even there at times. Leave it in your pocket, or set it on the counter as you walk around if you like – you’ll experience few issues within a 30-foot range.

As for Sennheiser’s NoiseGard noise cancellation, it doesn’t quite hold up to Bose’s QC35 when it comes to high-frequency noise removal. However, the feature is still welcome as it melts away most annoyances while music is playing, and creates a sort of calming serenity, if not a full-on shielding from the noisiest environments.

As we mentioned in the video above, the $500 price point is essentially a $100 surcharge each for Bluetooth and noise cancellation. It should also be noted that, while supplies last, you can likely nab the nearly identical Momentum 2.0 Wireless for a lower price than the HD1 at present, and we expect the pricing to go down in short order for all but the Pink Floyd edition. In any event, the current pricing leaves $300 of great Sennheiser sound, and the HD1 bring all of it, competing nicely with just about anything we’ve tested in the midtier over-ear category.

The dimensional soundscape is detailed and clear, though we could’ve used a bit less bass.

The sonic feature of envy with the HD1 Wireless is the headphones’ talent for dimensionality. These cans draw up an expansive soundstage, broadly spreading out instrumentation throughout spherical space like glistening constellations. Unlike many wireless headsets, there’s no audible amplifier noise to speak of here, allowing the cans to expose stark clarity.

Songs like Sweet Virginia by the Rolling Stones utilize that dimensional spacing to dazzling effect, pushing the acoustic guitar out on some island in the center left channel at the entrance, while each subsequent entrance from mandolin, harmonica, sax, drums, and Mick Jagger’s tattered vocals are all given their own domain in which to play around, striking excellent balance throughout the sound sphere.

There’s plenty of highly concentrated detail to be found throughout the brandy-colored midrange and treble registers, offering pearl-enameled piano from an Abbey Road track here, or a bubbling analog synth from a Vampire Weekend tune there. Rich vocal lines are effortlessly exposed, hitting your ear’s sweet spot with chocolatey goodness. But you’ll give up some of that extra textural definition that comes with more audiophile-aimed headphones, like Oppo’s PM-3, or Audeze’s Sine on-ear headphones. Of course, wireless freedom may be a fair trade-off for many listeners.

Speaking of Vampire Weekend, tracks like Everlasting Arms from the band’s Modern Vampires of the City pound with authority thanks to what sounds like a beefier bass register than we heard from the wired Momentum. For our ears, the heavier push can be a shade or two more than we’d prefer on occasion, but bass is firm and musical across all genres, and never treads into Beats territory. Call it a modern affectation to keep up with bass-head demand, without sacrificing Sennheiser sonic quality.

Sennheiser offers a 24-month basic warranty for the HD1 headphones that covers manufacturer defects for parts and labor. You can find out more about the warranty at Sennheiser’s website.

Though priced to peel away the timid, there’s no doubt Sennheiser’s HD1 Wireless are a stellar pair of wireless cans, continuing to offer class-leading performance. There are a few things we’d change — namely the hefty bass for wireless mode and equally hefty price tag – but the price has already come down for the originally branded Momentum 2.0 Wireless, and we expect the same to happen over time for the HD1. While a solid choice now, bagging them for anywhere below the $400 mark makes this very desirable pair of top-tier headphones all but irresistible.

The obvious alternative here evokes the proverbial line about the sweet smell of a rose by any other name, but in this case that other name is Momentum 2.0 Wireless. If you can find a pair, we’d suggest doing so as the price has been lowered significantly. Other solid choices for an excellent wireless workhorse include the aforementioned Bose QC35 and Sony MDR-100x, both of which offer comparable performance with slightly improved noise cancellation.

The fact that Sennheiser is still riding the Momentum 2.0 Wireless in HD1 form is more than enough proof that these headphones can stand the test of time. Even with tech that’s aged a few years, the HD1 Wireless should last for years to come.

If you’re looking for a wireless pair of headphones that match incredible sound with sexy good looks and comfort, and you don’t mind paying for them, the answer is yes. The caveat, of course, is that we suggest you get your hands on the last remains of the original Momentum-branded cans, the identical-yet-more-affordable Momentum 2.0 Wireless, before they’ve gone the way of the dodo.

Updated: This review has been updated to reflect Sennheiser’s new branding for the Momentum 2.0 Wireless, now called the HD1 Wireless. The headphones have been compared to the latest in their class, and the review also now showcases the specially designed HD1 edition Pink Floyd version.