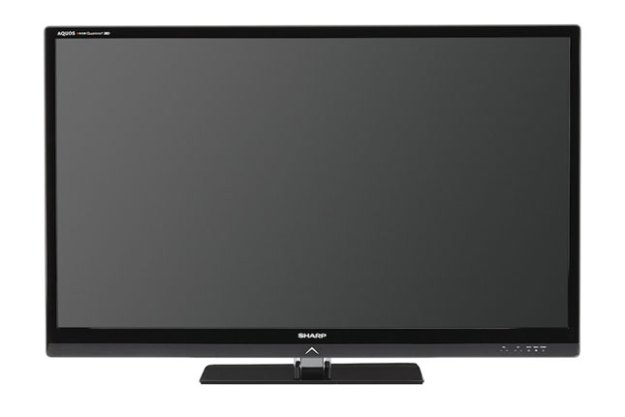 Sharp LE835U series information: This review is based on our hands-on experience with the LC-LE835U TV. The related Sharp LE830U, LC-LE831U and LC-832U offer very similar (but not identical) picture quality. According to the manufacturer’s specifications, the two most outstanding differences between our review sample and the three other models listed are that our unit offered 3D capability and a 240hz refresh rate while the other models are not 3D capable and (aside from the 240hz LC-832U) have a 120hz refresh rate. A small difference in dynamic contrast ratio also exists between models, with the 835U at 8,000,000:1, the 832U at 6,000,000:1, and the 831U at 5,000,000:1.

3D is old news. The current hype for high-end HDTVs is Internet access and apps galore (actually this has been a feature in TVs in some way, shape or form for over 15 years but who’s counting). Oh, and picture quality has its place too. Let’s see how this Sharp measures up on all fronts.

The Sharp Aquos Quattron LE835U series is the company’s latest generation edge-lit LED 3D-ready HDTV and is very attractive on its supplied silver-accented stand. Just from late last year, the company changed the ID of many of its televisions, creating a flat panel with a bezel 50% narrower. With the thin bezel it looks like a large picture window – exactly what HDTV’s pioneers envisioned back in the day. With such a thin frame, there’s not much more to discuss on the front although on the bottom right is the 3D emitter for the optional active shutter glasses required to watch 3D programming. This year Sharp, Sony and other companies decided to take the glasses out of the carton of many models in order to lower list prices. With 3D such a bust, they’ve decided if you want 3D, you’ll buy the shades at the time of sale or at a later date—if ever the amount of programming truly gets appealing. After all, how many times can you watch “Avatar”?—we’re at 15 and counting… Also along the lower edge is an icon that turns white in 2D, blue in 3D—or you can just shut it off. There are sensors for the remote and Optical Picture Control which adjusts brightness to the ambient light. Also here are touch sensors for controls you’ll never use unless your remote dies.

On the left side is the primary jack pack with four HDMI inputs as well as USB 1 and audio out. On the rear are additional jacks including Ethernet, PC-in and RS-232. This should take care of most add-ons, but it would be nice if there was an SDHC card slot for quickly reviewing stills.

The set has fairly standard audio package of 10 watts by two with a 15 watt subwoofer. It goes without saying a quality soundbar or multichannel surround system should be part of your entertainment mix—especially if you’re buying a 60-inch television.

You get the panel, stand with connecting screws, owner’s manual (88 pages in English) and four-device remote (three buttons are programmable). As part of our usual lament, the remote is decent but a $3,000 HDTV should have a backlit one. There’s one item missing from the carton of last year’s wireless-enabled sets—the USB Wi-Fi dongle. Now Sharp has wisely built the Wi-Fi circuitry into the TV eliminating the add-on. It handles 802.11 a/b/g/n signals.

After putting the puzzle together (it’s really simple and the lighter panel certainly helped), we connected a Sharp BD-HP35 3D Blu-ray player and a Verizon FiOS cable box. Our review sample was supplied with one pair of Sharp active shutter glasses ($150) so keep that extra cost in mind if you’re heading down the 3D trail. Note: Sharp told us they will only offer active 3D HDTVs this year rather than any of the lower-quality passive sets hitting the market.

Setting up the Sharp Quattron is simple since it has a very straightforward menu system. Given Internet apps are the flavor of the month, we entered our security key via the remote to sample what Sharp had to offer. Along with NetFlix, vudu and Cinema Now, Sharp has plans to add Blockbuster, Alphaline and Napster. Basically, if you want to download lots of movies, TV shows and songs through the set, you can do it. It’s also DLNA certified so you can access content from a linked home media server. You can also access the ‘net using the Aquos Console which has many typical widgets (weather, stocks and so on). Personally we’d much rather use our iPad to surf while watching the entire screen; the keypad on the iPad is much easier to operate than the virtual onscreen keyboard and remote. Sharp has a nice feature called Aquos Advantage Live where you can get online help for your HDTV (this is an option on the Console). A service tech can control your set remotely and make the appropriate fixes. Fortunately we didn’t encounter any issues but it’s nice to know it’s there.

Now let’s talk about a thing called picture quality since not many us have 60-inch monitors connected to our computers—and this is first and foremost a television, no matter the current buzz. As Digitaltrends.com readers know, we were extremely impressed with the first Quattrons we reviewed, the 46-inch LE830U and 60-inch LE925UN—especially 2D performance. Although some may take exception to the bright yellows and golds Quattron delivers, we prefer a set we might have to rein in and tweak, rather than a flat non-contrasty image. Again this is a personal taste—that’s why you really need to do an eyes-on test at a local retailer. This is a hefty investment too, so it’s worth moving from behind the computer to the real world. Enough of the lecture…

The Quattron system adds a fourth color—yellow—to the standard red, green, blue (RGB) of all displays. It’s been enhanced this go-round to Quad Pixel Plus and AquoMotion 240 for smoother images and practically no blur with fast action such as live sports. Sharp also incorporates Frame Rate Enhanced Driving circuitry for brighter 3D effects and less crosstalk, something that bothered us when we reviewed the LC-60LE925UN. All this sounds good on paper but you know where the proof is—sitting 7 feet away from the screen, 3D glasses on.

As with any pricey HDTV, the LC-60LE835U has image adjustments galore including Color Management System (tone), gamut, color temperature, black levels and so on. It even offers the BT.709 Standard for uber video geeks yet doesn’t have THX. As with earlier editions we were quite content with pre-sets of Auto and Standard.

Before returning to the creative 3D minds of James Cameron and Tim Burton, we checked out some 2D HDTV. “Watchman Director’s Cut” is a good test for deep blacks and strong yellows; the set didn’t disappoint. In fact, it looked terrific, almost as good as a high-end plasma which still remains our quality standard for HDTV black levels and contrast (think the new Panasonic GT30 series). The AquoMotion handled the fast-moving Dr. Manhattan quite well. It even worked well with non-CGI material such as NBA superstars running, gunning and slamming on the court shown on ESPN HD. In a bit of serendipity, HBO was showing “Elizabeth: The Golden Age,” a good test for the Quattron’s color palette, especially when the Queen checked out a golden ship sculpture. In all, you’ll be quite happy watching 2D HDTV on the Quattron.

In our earlier review of the 3D Quattron, we weren’t pleased with the excessive amount of crosstalk; this basically means 3D effects aren’t as distinct as they should be. Also the overall image was a bit too dark. Right off the bat (in Avatar) when Sully comes out of hibernation there are dots in front of his eyes. We saw them clearly on a Panasonic 3D screen not as much with the older Quattron. This time they were “right there,” in your face. In the classic scene of the “Seeds of the Sacred Tree,” the effects delivered by the LE835U were outstanding. Granted we still saw some crosstalk in this CGI-filled opus especially with the 3D brightness boosted to high but overall the quality of the set breathed some new life into the film. We did most of our viewing with the boost set to Middle. Colors were great, brightness improved, effects enhanced—you really couldn’t ask for more—other than watching a glasses-free HDTV but that fantasy won’t be affordable for at least five-to-10 years. The Quattron did an excellent job with “Alice” as well. It had us holding on as Alice fell down the rabbit hole. Again the 3D quality overall was much improved from Sharp’s first-gen models.

The Sharp Quattron LE835U series is easy to recommend with its very good picture quality, enhanced 3D effects and growing number of Internet apps. To show how things have changed, last year’s 60-inch LC-60LE925UN had a list price of $5,299 compared to $3,299 for the 2011 version. That said, spending an extra $900 list to get a 60 doesn’t seem like the best investment. The 52-inch at $2,399 seems like a much better deal—especially when it goes for around $1,950 at retail. You should expect similar percentage discounts for the 46-inch LC-46LE835U ($1,999 list) and the 40-inch with a $1,799 MSRP. Unfortunately, prices of really big (60+) flat panels really aren’t falling as quickly. Witness a new Internet-ready high-end 60-inch Panasonic plasma (TC-P60GT30) has an MSRP of $2,799. Given the economy and competition, we imagine prices will drop nicely in the months ahead for these big screens. If you have the patience, room and budget, wait for the 60 but the 52 or smaller sizes will hardly be a disappointment once you settle in to watch this very fine series of HDTVs.