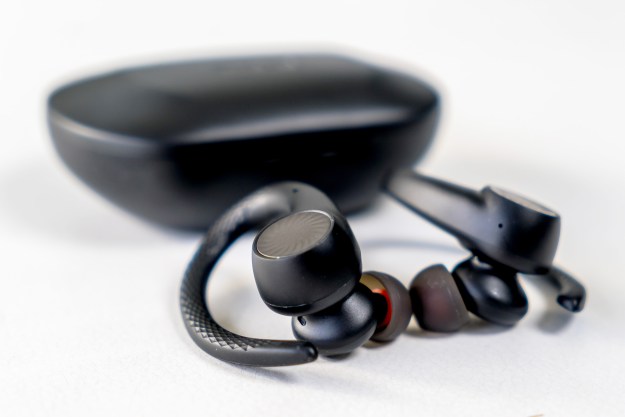 “The Tribit MoveBuds H1 will stay put and play the hits for days while you keep on moving.”

Sometimes wireless earbuds have a very obvious focus, and when they do, they need to stand out for that reason —  on top of all the other things that make good earbuds good. Tribit is yet another player trying to score points with anyone looking for earbuds that can withstand the rigors of an active lifestyle.

That’s what the MoveBuds H1 were built for, and with a huge battery life, the company saw to it to make sure they could also play tunes longer than most rival devices. Whether it’s worth wrapping these around your ears and tuning in for the long haul depends on what you’re willing to sacrifice.

Tribit’s packaging looks the same for pretty much any pair of earbuds it launches. Inside, it sticks to its penchant for including multiple pairs of eartips. There are six to choose from, so small or big ears won’t be a problem here. Apart from the short USB-C charging cable and quick start manual, there’s not much else to look at.

Any pair of earbuds with earhooks will naturally take up space, which explains why the case is as big as it is. Could you pocket the case? Sure, but not like most others, and that’s why I see the MoveBuds H1 living in a gym bag as much as any pocket.

The earbuds have IPX8 protection for water and sweat, so there’s a fair bit of durability to play with. You could hang out in the pool wearing them, in case you wanted to listen to something or take a call while in the water, but they’re not made for swimming. If you are going to expose them to salt water, make sure to rinse them with fresh water and wipe them dry. The case itself has no such protection, so avoid exposing it to H2O.

The earhooks are the key to their stability. When you wear them, they don’t move a whole lot, though the hooks themselves are flexible enough to handle different ear types. They do protrude a bit off the ear because of the way the drivers angle in towars the concha. It’s not a design flaw, but rather a better way to ensure they fit a wider variance of ears. I never felt uncomfortable wearing the MoveBuds H1.

At least that’s how I took it, since I could get a good seal from them for decent passive isolation. The MoveBuds H1 don’t have active noise cancellation (ANC) at all, so getting a comfortable fit is important to passively blocking out whatever background sounds it can. They’re obviously no match for earbuds with ANC in that regard, but if you’re at the gym or on a run, you may prefer to have some ambient noise seep in anyway.

It’s hard to argue with earbuds that can last up to 15 hours per charge.

Despite Tribit supporting the MoveBuds H1 with its own app, it doesn’t allow you to customize the touch controls. As is, a single tap on either side plays/pauses the content. Double tap on the right to skip a track and on the left to repeat or skip back. A triple tap on the left will bring up the phone’s voice assistant and, on the right, it turns on ambient mode from the right. Hold on the left to lower volume, and on the right to raise it. They’re all fairly responsive, and I didn’t find them to be cumbersome because the touch-sensitive area is easy to find with your fingers when you want to do something. These earbuds don’t have wear sensors to automatically play/pause when removing them, making the onboard controls all the more important.

Tribit’s app isn’t as deep or sophisticated as others, but there’s some utility in it. For starters, I got a firmware update while testing them addressing the inconsistent ambient mode. After the update, the MoveBuds H1 were better at running that mode, indicating that at least Tribit was going to try to make these earbuds better along the way.

Otherwise, though, the app is pretty bare-bones. You do get an EQ to work with, albeit with some limited customization. For example, the app gives you eight presets. Tap on one to select it during playback, or tap and hold to bring up the 10-band EQ and adjust the sliders however you want. The app gives the impression you can adjust the sliders on the existing genre-specific presets, but I wasn’t able to. Instead, to create my own presets, I needed to select the Customized one, adjust the sliders, and then save it as one of my own custom presets.

I’ll give Tribit credit for not skimping on the codecs. The MoveBuds H1 support AAC and aptX, which is great for both iOS and Android users. It’s just a bummer that aptX Adaptive isn’t in the cards here, though I can forgive that with sportier earbuds that aren’t necessarily trying to be hi-res competitors.

With a few EQ tweaks, they’ll handle any musical genres you throw at them.

In any case, these will deliver a bass-friendly sound if that’s what you’re looking for to pump you up during a workout. It’s not to a ridiculous level, meaning you can bring out more of the highs and mids if you adjust one of the EQ presets in the app. It is possible to find a good balance, but I personally liked that I didn’t have to work hard to feel good thumping bass come out of these buds.

Once I settled on a few custom presets, I had a sonic foundation I could rely on while wearing them. I liked the overall balance that is possible while listening, which is why a hip-hop track didn’t feel out of place any more than a classic rock track did. So, if you have a playlist you like to listen to when out for a run or during a workout, it won’t matter as much if it’s a mix of genres.

Passive isolation is also quite good, and so long as you get a good seal with the right size eartips, you will keep the bass from leaking out. That’s huge for runners who might worry about fiddling with them too much to ensure everything sounds as it should. The ambient mode was also better after the firmware update, allowing more background noise to seep in, as its prevailing issue before was a lack of transparency.

If you do plan to take a lot of phone calls with these earbuds, your results will vary. The mics are sensitive to outside noises, which makes calls harder to do. In quieter settings, I never ran into problems or complaints, but there wasn’t anything remarkable about how they performed during calls. If there was one plus, it was that the sturdy fit saw them barely move while talking, so those earhooks do the job.

It’s hard to argue with earbuds that can last up to 15 hours per charge. Raise the volume a bit or run ambient mode regularly, and that might shave things down to about 13 hours, which is honestly still spectacular by any measure. You could do several workouts or runs with the MoveBuds H1 before having to charge them again.

Part of the reason for that is because the fat case also has at least two extra charges in it, for a full rated total of 50 hours when putting all the numbers together. Even if you factor in the battery loss from volume levels and ambient mode, you’re still looking at north of 40 hours before charging everything again. You can only charge via USB-C, as there’s no wireless charging here. There’s no fast charging, either, and it takes about two hours to fully charge the case and earbuds when they’re out of juice.

Given their sporty focus, the Tribit MoveBuds H1 do the job they’re supposed to do. They can handle rugged situations, play well while doing so, and last longer than a whole lot of competitors. You lose out on certain features to get those things, like ANC and a deeper app, but if your purpose is to wear earbuds while staying active, these prove to be ready for action.

They’re not expensive by comparison to others, though budget earbuds come offer good options these days. The JLab Epic Air Sport ANC are a very similar concept, with similar earhooks and the same durability. As their name implies, they do have noise cancellation, and even an app with deeper controls, only with a default sound that isn’t quite as good.

The Treblab X3 Pro are often cheaper to buy and offer a very similar design and experience. There’s no app, though, so customization hits a wall, but they are resilient and play well out of the box. If your budget allows for it — and you’re cool with forgoing earhooks — the Jabra Elite 4 Active are impressive for what they can deliver.

Don’t let the price fool you. These are sturdy and tough, capable of taking some punishment. That doesn’t mean they’re open to abuse, as you should clean them and ensure sweat and water don’t stay on them, especially when putting them back in their case. The standard one-year warranty doesn’t include protection from that kind of physical damage.

Yes, the Tribit MoveBuds H1 are worth taking a chance on based on what they cost and what they can do. If you’re just looking for earbuds for leisure, there are plenty of other options. These excel most in active situations, and so long as you’re OK with what’s missing here, you should come away satisfied.