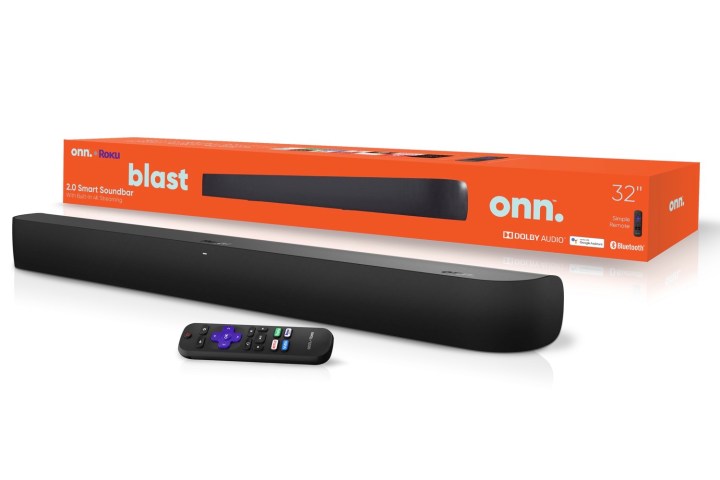 Walmart has just announced a set of exclusive Roku devices under its “onn.” brand: The onn. Roku Smart Soundbar, which includes the Roku OS streaming interface, and the onn. Roku Wireless Subwoofer. They sell for $129 each, which is $50 less per device than the recently announced Roku Smart Soundbar and Roku Wireless Subwoofer.

Despite the nearly identical names and product designs, the differences are more than skin-deep. These Walmart-exclusive versions of the Roku Soundbar and Subwoofer are less powerful and make a better option for those who value price over performance.

The onn. version of the Roku Smart Soundbar features 40 watts of peak power versus the Roku Smart Soundbar’s 60 watts. It also uses different drivers, though Roku did not say exactly what the differences are. The onn. Roku Wireless Subwoofer pack substantially less punch than the Roku version, at 150 watts of peak power versus the Roku’s 250 watts. In both cases, the driver is 10-inches.

The onn.-branded soundbar comes with a simple Roku remote that uses IR functionality. You get dedicated TV power, volume, and mute buttons, but there is no microphone for voice functionality — another area where Walmart has scaled back on features to deliver a lower price.

Connections are plentiful. You can use HDMI-ARC for an easy, single-cable solution with compatible TVs, or you can hook-up both HDMI and optical cables if you have an older model of TV. It’s also a Bluetooth speaker, which gives you a way better option for sound quality when listening to audio from your phone, tablet, or computer.

Just like Roku’s own version of the Smart Soundbar, the onn. model has advanced audio modes including automatic volume leveling, Night Mode, and Speech Clarity.

When it comes to actual Roku functionality, you still get the whole package. The onn. Roku Smart Soundbar supports 4K, HDR, and Dolby Audio, and works with thousands of streaming apps including Roku’s The Roku Channel — a one-stop-shop for finding free and premium movies and TV shows to watch. As with Roku’s version, the Walmart Roku Soundbar is compatible with Google Assistant and Alexa-enabled devices.

The Walmart onn. Roku Smart Soundbar and Wireless Subwoofer will be available in-store and online in the coming weeks. If you prefer the idea of Roku’s own versions of these devices, you can pre-order them now, with an expected October 13 ship date.

Sony’s SRS-XV900 pumps its party speaker lineup to the next level
Google Chromecast tips and tricks to make you a master caster
YouTube TV: Plans, pricing, channels, how to cancel, and more
Platin Audio’s wireless home theater speaker system now handles Dolby Atmos
Apple AirPods Pro 2 vs. Samsung Galaxy Buds 2 Pro
The one AirPods Pro improvement we just can’t see — yet
Google TV tips and tricks you need to start using now
How to program an RCA universal remote
The best alien movies of all time
The best superhero movies of all time
Marantz’s new Cinema series AV receivers are a stylish way to go 8K
The best superhero TV shows of all time
What’s new on HBO and HBO Max and what’s leaving in October