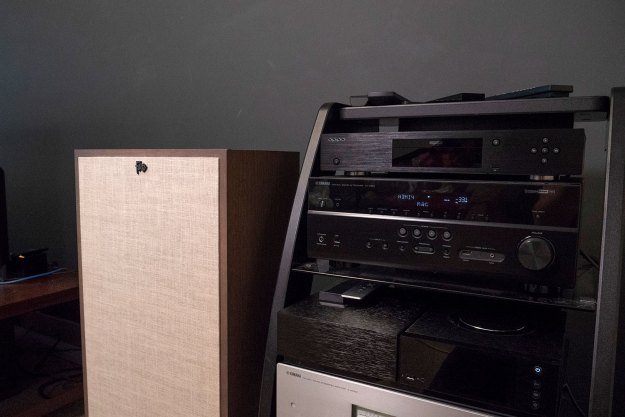 “A potent mix of performance, simplicity, and versatility on a budget make the RX-V683 a great way to upgrade your home theater.”

It seems with every passing year the next generation of A/V receivers leaves us flabbergasted by just how much you can get for your money. Yamaha’s RX-V683, the top of the RX line, is no exception. Loaded to the gills with features, from 4K HDR passthrough and Dolby Atmos to multiroom audio and Alexa integration, this versatile 7.2-channel unit can upgrade your home theater for as little as $400. While there are plenty of choices in the cheap seats for AV receivers, the RX-V683 makes a great case for a slot in your TV room.

Not much to see here, just a foam sandwich with the sizeable RX-V683 in gloss black at the center. The receiver is fairly heavy — usually a good thing for amplifiers — weighing in at 22 pounds, but it’s much lighter than similar models from just a few years back. The overall design is as simple as you’d expect for a receiver in its price class. Set on plastic feet and stretching almost seven inches tall, the RX-V683 takes up a fair amount of space on your TV stand, but while it’s not a slim machine by any means, touches of aluminum along the front face and volume knob give the unit some class.

Accessories include a quick start guide and a CD-ROM for the full manual (it’s also available online), as well as AM and FM antennas, Yamaha’s YPAO microphone for setup, and a silver-and-black wand remote and batteries.

The RX-V683 is stacked with features, starting with a well-appointed input panel at the back. While there aren’t a ton of legacy inputs in comparison to some of Yamaha’s previous models, dual RCA analog audio inputs, composite and component video inputs, and a phono input should keep anyone but serious gearheads and ebay hoarders happy. HDMI inputs include 5 at the back, three of which support HDCP 2.2 for 4K HDR components, and one up front, along with an ARC port for simple connection to your TV.

With 7.2-channels at your disposal, there are multiple configurations available, including 7.1 or 5.1.2 setups with second zone, or a lone 5.1 setup with bi-amping for the front speakers, all easily coordinated through an on-screen guide. Power is rated at 90 watts per channel into 8 ohms which is lower than some competitors, but should easily get the job done.

Dolby Atmos and DTS:X are supported, of course, along with Cinema DSP 3D, Dolby TrueHD and DTS Master Audio, as well as high resolution support at 24bit/192kHz for WAV, FLAC, and ALAC files — essentially everything your ears should need.

On the video side, the RX-V683 supports 4K HDR passthrough and upscaling at 60 frames per second, including HDR10, Dolby Vision, and Hybrid Log Gamma support for over-the-air HDR broadcasts when those come along.

Amazon Alexa support for basic voice control with an accompanying Alexa-enabled speaker is available, and the receiver can also detect sources connected to its HDMI inputs and label them accordingly. In our tests, the RX-V683 automatically labelled a Roku and PS4 when they were plugged in. There is also no shortage of ways to stream audio wirelessly.

Yamaha has adapted two pretty killer apps for its A/V receivers including the AV Controller app for deep dives into the settings — from volume control to source and DSP selection — and the company’s own MusicCast app.

The RX-V683 is stacked with features, starting with a well-appointed input panel at the back.

Bluetooth is the simplest way to stream wirelessly — we did experience a few hiccups during long streaming sessions, but it never became a major issue. Dipping into the MusicCast app allows for a litany of other ways to stream over Wi-Fi, including Apple AirPlay, internet radio, streaming apps like Deezer and Tidal, and Spotify Connect. If you’re willing to climb over into Yamaha’s walled garden, MusicCast does much more, too.

Adding Yamaha wireless speakers allows for up to nine separate wireless zones of audio and those options include everything from soundbars to high-end models like Yamaha’s NX-500 active monitors. MusicCast also has other cool features, like the ability to stream TV audio into other rooms, as well as intuitive features like a slow-ramping volume slider so you won’t accidentally slip your finger and blast out your ears while raising the volume.

MusicCast is a great perk, and one of the most well-designed multiroom setups out there, but it only really opens up if you pick up Yamaha’s wireless speakers or use one of their small amplifiers. That said, even for basic streaming, the MusicCast app is intuitive and streamlined.

Setting up the RX-V683 is a relatively simple affair, thanks in part to Yamaha’s proprietary YPAO sound optimizer. First, you’ll want to wire up all your speakers, connect your components, and make sure you connect to your TV via the ARC HDMI connection. If your TV doesn’t have ARC, you can still connect via HDMI to see the on-screen menu, but you’ll need to connect TV sound via an optical cable. Also, frankly, if your TV doesn’t have ARC it may be time to upgrade.

Surround sound is handed off between speakers with expert fluidity.

Once you’ve got your speakers wired and sources connected, we recommend running the YPAO system for starters — essentially automated once you plug in the mic — and then digging deeper into the Setup menu from there. We set up a couple of different satellite speaker systems with the RX-V683, including Focal’s Sib Evo Dolby Atmos speaker system, which only needed minor adjustments after initial setup.

YPAO automatically placed the speakers’ size, rating them as “small” and set the crossovers at 80Hz, and it’s relatively simple to adjust those parameters and/or adjust the individual speaker levels by going into manual mode.

When we connected a pair of larger Definitive Technology D9 bookshelves YPAO rated the speakers as “Large,” however, so we needed to make some adjustments to make sure our subwoofer took most of the heavy load down low. At this point, you can also choose to leave the YPAO Parametric EQ in place (it defaults to “Flat”), choose one of the other settings (Front or Natural), adjust it manually, or simply turn it off. We normally preferred the Flat setting, which added a bit of extra presence in most setups, but your experience will vary depending upon your speakers and your room.

Luckily, playing around with the setup is pretty simple thanks to Yamaha’s easy-access On Screen menu, subdivided into simple categories like Setup (referenced above), DSP Program and Scene, which allows you to match DSP modes with input sources, and is also available via buttons on the front face.

The DSP Program offers a ton of ways to mess with the sound stage via modes like Drama, Adventure, and Sci-Fi, as well as choosing surround sound matrixing. You can also go much deeper, including selecting 7-channel stereo to spread out your stereo sound, or the Surround Decoder mode, which allows you to try matrixing like Neural: X or Neo:6 Cinema with a press of the navigation key. Frankly, though, we always preferred using Straight, which delivers unprocessed audio for a straight shot of whatever source you’re feeding the receiver.

Speaking of the remote, its button load seems a little intimidating at first, but it’s actually pretty well laid out, and while we wish it was illuminated, we love the ability to choose any connected source from the top row of selections at the tap of the button.

When connected to ARC, the RX-V683 also defaults to TV audio when turned on, and its easy to move through your sources with little lag. The receiver did have a bit of trouble with ARC when we first set it up, occasionally muting TV sound or failing to read power commands, but power cycling the unit alleviated the issue.

When it comes to performance, the RX-V683 won’t offer the kind of stirring audio clarity or roaring power of pricier receivers, such as models in Yamaha’s own Aventage series or our power-packed in-house receiver, the Anthem MRX 1120, but it certainly gets the job done, and does so quite well for its easily approachable price point.

The sound signature has some of that familiar Yamaha zip in the upper register we’ve come to know, along with robust bass response below. The pep up top was further illuminated by the YPAO Flat EQ, which added some extra flare and presence to midrange and treble frequencies.

The Sib Evo speakers displayed impressive clarity when connected to the RX-V683, and once we got the settings dialed in, surround sound was handed off between speakers with expert fluidity, while the Atmos channels were served up with open and expansive dimension at the front of the room.

Generally, we enjoyed the receiver more for cinematic content then for music.

The V683 did even better when paired with Focal’s brilliant Dome Flax speakers, supplying their premium cones with plenty of power to create impressive definition and dynamics. The receiver also offers a hefty helping of bass on demand, including an Extra Bass bass enhancement setting in the Option settings, but we didn’t find this necessary with any of the gear we used.

Generally, we enjoyed the receiver more for cinematic content then for music, and it wouldn’t be our go-to pick with stereo sources like the Definitive Technology D9 2.1 configuration we mentioned earlier (paired with a KEF R400b subwoofer), but that wasn’t a huge surprise. We wished for a bit more precision and presence with this setup, especially when auditioning complex productions with a lot of booming bass and lower midrange frequencies.

Still, for most speaker configurations the RX-V683 provides stellar performance for its entry-level price, especially when powering surround sound and Dolby Atmos setups.

Yamaha offers a two-year warranty for defects in materials or workmanship on the RX-V683.

Yamaha’s RX-V683 is a versatile, feature packed receiver offering everything you need to power your Dolby Atmos system, all at a seriously accessible price.

There’s a nice selection of mid to entry-level receivers in the hunt with the RX-V683, many of which have dropped well below their MSRP at time of this publication. Those looking for a bit more power per channel could step up to Onkyo’s TX-RZ280, which offers similar specs and a bit more wattage per channel than the RX-V683, and also offers Chromecast support, but its currently a couple hundred dollars more online.

Meanwhile, Pioneer’s Elite Audio VSX-LX102 also offers similar specs, Chromecast built in, and more power at as much as $100-200 less online. As we said, it’s a good time to upgrade, and you can find even more options in our Best Receivers guide.

With future proofing thanks to DTS:X and Dolby Atmos support, the next level of HDR support, Amazon Alexa, and much more, the RX-V683 should last a good, long while in your home theater setup.

Yes. While there is certainly no shortage of competition, if you’re looking for a capable and affordable receiver to run your Dolby Atmos or surround sound setup — and you like Yamaha’s flavor of simple and versatile A/V control — the RX-V683 is a great option.