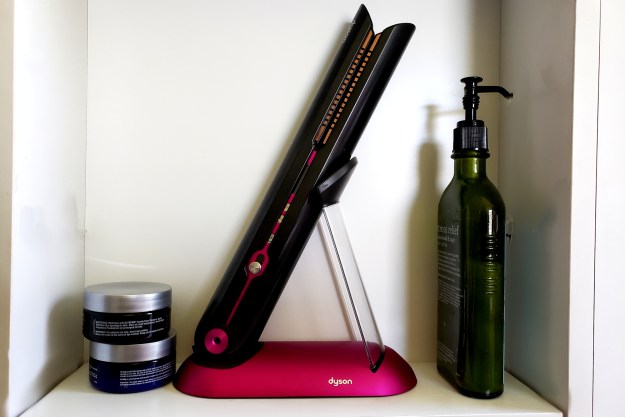 “It may do less damage to your hair, but this straightener is more of a hassle than help.”

You may know it as the kings of vacuums, but Dyson isn’t new to hair products. The company came up with one of our favorite hair dryers and makes an innovative hair curler.

Its newest product, the Corrale hair straightener, was designed to cut the amount of damage your hair sustains from straightening by half, and to reduce the number of flyaways you experience by using special, flexible heating plates.

While that sounds great, I wondered if this $500 cordless straightener was worth the hype. Here’s what I found.

One of the first things you’ll notice about the Dyson Corrale is the unusual heating plates. They aren’t solid like normal plates and are designed to wrap around each section of hair, so you get straighter hair with fewer passes.

I can totally see how the Corrale would do less damage than a normal straightener.

When I gave it a try, I found this to be true. A swipe or two and my wavy hair was straight. If you’re used to doing several passes to get your hair straight, then I can totally see how the Corrale would do less damage than a normal straightener.

Another feature that can save your hair is heating regulation. There are three heat settings — 330 degrees Fahrenheit, 365 F and 410 F, so you can choose which setting best fits your hair type. Typically, the coarser your hair, the higher the temperature you’ll need. The Corrale then regulates the plate temperature 100 times a second so the heat never goes above the selected setting.

Corrale’s 4-cell lithium-ion battery can work for 30 minutes without being plugged in, making it great for people who like to pace or tend to need to check on the kids while getting ready. Beyond that, the battery offers up some problems.

The Corrale is almost five times heavier than your typical straightener.

Most people would probably scoff at the weight difference. It can’t be that heavy, right? However, the Corrale is almost five times heavier than your typical straightener. It’s the difference between a box of pasta and a bag of flour. Imagine how tired your arms will be after just half of your hair is done. Ouch!

Another problem the battery poses is charging. The battery lasts for 30 minutes, and that isn’t long enough for some of us to do our hair. It recharges to 90% in 40 minutes and fully charges in 70 minutes. That’s a long time when you need to get to work. I would say the answer would be to use the cord once the battery went dead (it works when it’s plugged in), but the cord makes the Corrale even heavier. It is 12.5 feet long!

One problem the battery doesn’t contribute to is when it comes to travel. The Corrale has a special tab that allows you to disengage the battery so you can pack it in your carry-on.

The Dyson Corrale definitely isn’t for those who only occasionally straighten their hair. It straightens hair really well, but it’s heavy and more inconvenient than I would have expected. Plus, it does cost around $5oo. That seems like way too much for a hair tool when you can get similar results with a straightener that’s one-fifth the price (and the weight). The only reason I can see to shell out $500 would be if you straighten every day, you need to lessen the amount of damage on your hair, and you’re willing to power through the heaviness.

Well, that’s hard to say. There are plenty of less expensive, quality cordless straighteners that weigh less, like the Conair Unbound Cordless Flat Iron. There aren’t any straighteners with these types of plates, though. So, if Dyson is right and the plates cause less damage, then there probably isn’t a better alternative in that aspect.

The Dyson Corral seems to be very well constructed in most aspects, but the tab you pull to put it into travel mode seems like it would be easily damaged. That concerns me because the straightener won’t work if the tab can’t be reinserted properly.

It pains me to say this because I had such high expectations for the Dyson Corrale, but no, you probably shouldn’t buy it. It’s too expensive and heavy to make it a good option.