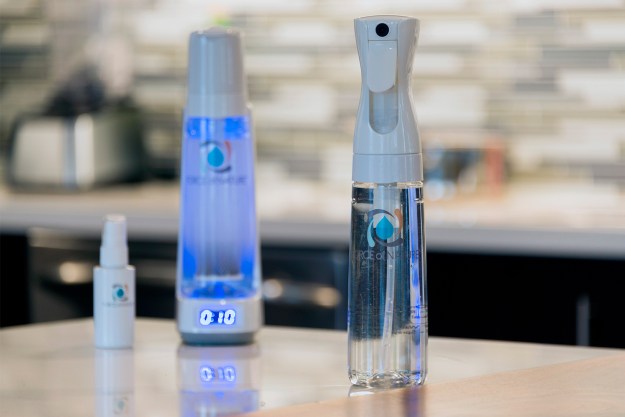 “Force of Nature turns a couple pantry staples into a potent germ-eradicating elixir.”

On a scale between “germaphobe” to “the five-second rule is law,” I fall somewhere in between. When choosing an all-purpose cleaner, I also try to find the middle ground — something that’s reasonably eco-friendly but also actually, you know, cleans. That’s why I was interested to try Force of Nature, a product that promises to electrolyze water and turn it into a powerful cleaner and disinfectant using just H2O, salt, and vinegar. It’s supposed to be nontoxic, but supremely effective, killing 99.99 percent of germs. So, can three simple ingredients and a bit of science really combine to make the perfect cleanser?

The Force of Nature kit comes with a number of things. It has an activator base, an activator bottle, five capsules containing salt, water, and vinegar, a 12-ounce spray bottle, and a two-ounce spray bottle. To turn the capsules into electrolyzed water, you add tap water to the activator bottle up to the indicated line, dump in the capsule’s contents, close the cap, and rest the bottle on the base. With the base plugged in, you press the start button. A blue light glows as tiny bubbles start fizzing in the bottle.

It definitely looks like magic is happening, but what’s going on is a whole lot of breaking up. The electrical current shakes things up, and the sodium and chloride that once formed salt starts reforming with the hydrogen and oxygen from the water. The vinegar helps create the proper pH environment for it all to happen.

What you get instead is sodium hydroxide, which works as a cleanser, and hypochlorous acid, which is a disinfectant. The whole process takes six minutes, and the resulting solution lasts two weeks before the hypochlorous acid loses effectiveness. A handy counter on the activator base glows blue with the number of days remaining, though it forgets the number if you unplug the base.

Electrolyzed water has been used in Japan for decades, and is currently used for industrial cleaning in the U.S. as well. Back in 2000, University of Georgia professor Yen-Con Hung told Science Daily that soaking a cutting board in warm, electrolyzed water for five minutes could reduce bacteria a million-fold. Back then, an electrolyzer cost between $3,000 and $5,000, far out of reach of most consumers. The Force of Nature system costs $90, or about 25 bottles of Method all-purpose cleaner. Each 25-pack of capsules costs $20 including shipping, but you’ll have to dump the batch you made every two weeks, whether you used it all or not. Electrolyzed water still isn’t cheap, then, but it’s a lot better than it used to be.

But there’s also a big difference between soaking a cutting board for five minutes and spraying one down and leaving the disinfectant on there for 30 seconds. To test out the claims that the Force of Nature spray kills 99.99 percent of germs, I took samples from my kitchen counter, a rubber tupperware lid that had been sitting in my kitchen with food on it for a couple days, and the tile my shower. I took samples before, and at least 30 seconds after, spraying the area down with the concoction.

The results from the Columbia Food Laboratories here in Portland, Oregon, showed that the spray reduced the number of bacteria colonies between 86 and 93.75 percent. Keep in mind that I prepared the samples myself, and there was definitely some possibility of cross-contamination despite my best efforts. Still, the results show pretty significant reductions in bacteria.

Unlike anti-bacterial soap, any leftover bacteria aren’t going to start developing resistance to the spray, either. The electrolyzed water works differently, by damaging the cell wall and causing it to burst. It’s similar to why bugs don’t develop resistance to bleach.

Force of Nature says its spray works on everything from granite to stainless steel to plastic to glass to carpet. To test out its cleaning power, I used it to clean a variety of food stains off my counter, toothpaste from my bathroom sink, mystery substances from Digital Trends’ notoriously messy fridge, and some brown spots of unknown origin on a couch next to the office ping pong table.

In each case, I’d give the Force of Nature spray bottle a pump, then use paper towel to rub away the stain. I’d then follow up with a spritz of commercial cleaner and go over the same spot with a paper towel to see if there was any visible residue remaining. Some spots required some vigorous rubbing and scraping with a fingernail, but overall the electrolyzed water seemed to be able to handle everything I’d normally use an all-purpose cleaner for. I still needed to break out a Magic Eraser for a wine stain that neither the Force of Nature nor any regular cleaner could completely take care of.

The electrolyzed water is also supposed to work as a Febreze replacement. When you spray it in the air, it smells fresh, with the occasional whiff of vinegar that quickly dissipates. To put it through the freshening paces, I made a couple unfortunate volunteers fork over their shoes. I sprayed one down with electrolyzed water and left the other as is. After about an hour, I handed the shoes back and had the owners perform a sniff test. The results were a mixed bag, with some correctly identifying the cleaned shoe, and others getting it wrong. It may depend on what you’re cleaning, though, because I found it definitely neutralized odors with non-fabric items.

The Force of Nature system is not something you’d see at the grocery store and immediately pick up, given its $90 price tag. However, if you really dislike cleaning with store-bought chemicals, it’s a unique option to consider. The kit is nice-looking, though I found the 12-ounce spray bottle’s flow a bit hard to control.

However, you can easily swap in your own spray bottle, too. There are definitely some drawbacks, like the fact that the solution expires after two weeks. It’s nice that the base keeps a countdown for you, but that means you have to constantly leave it plugged in. You also can’t run to your local store to pick up the replacement capsules or mix your own brew of vinegar and salt. You’re stuck buying capsules from the source. If you need a cleaner right now, but you’d forgot to restock, you’re out of luck.

Still, the spray definitely killed germs, and cleaned well. It was nice to spray down my cat’s water bowl without worrying about leaving a residue of mysterious chemicals behind, or a gross taste or smell that would cause him to turn up his nose. I’m not tossing my Magic Erasers, but I can see electrolyzed water becoming the everyday cleaning system for a lot of eco-conscious households.