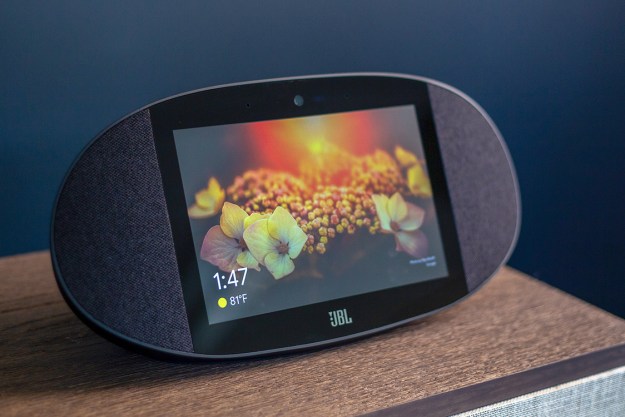 There are some things that smart speakers such as the Amazon Echo and Google Home just struggle with. Since we like to give our Spotify playlists creative names, we often find ourselves in a battle of wills with the speakers, trying to convince them to play what we want to hear. New speakers with screens (or spreen or screaker, if you don’t want anyone to know what you’re talking about), like the Echo Show and the JBL Link View ($199), make some tasks easier and also increase the functionality by showing photos, videos, and more.

While the Echo Show is obviously an Alexa device, the JBL Link View is, like Lenovo’s Smart Display, a speaker/screen with Google Assistant. The JBL device has an eight-inch touchscreen, but it’s primarily meant to be controlled by voice commands. Here’s what it’s like to boss around the Link View.

JBL is a speaker maker, and the Link View’s speakers are right up front. The pill-shaped device has a flat front that is slightly tilted, and rounded back with a speaker on either side of the screen. There’s a slider button on the back that lets you put a physical shutter over the five-megapixel camera above the LCD screen. Another toggle below that switches off the microphone. You can use both to make calls via Google Duo or use the device to make regular phone calls, too.

We really loved the trim look of the Lenovo Smart Display, and the JBL is definitely a bit bulkier. At 13 by 6 by 4 inches, it’s not a total counter-hog, but it isn’t insignificant, either. It’s chunkier all around than the Lenovo, which has the same size screen.

What shows up on screen is slightly customizable. You will need the Google Home app to set up the device and to play around with settings. You can have it display the weather and time. The background images can be culled from collections such as fine art or earth and space imagery, or you can have it show your Google photos. On our iPhone, this was a single group of photos from a trip to Berlin, so we stuck with some default scenic images.

Cool to the touch

The Google Assistant experience is the same across all manufacturers’ devices, and there are a few quirks to get used to. They all seem to be straddling this divide between tablet and smart speaker. Its voice-activation features are very similar to the Google Home, but the screen does add a few complications. If you want to watch a video, you’ll often have to specify, via voice command, that you want Google to play it on YouTube. There’s no search bar, but you can scroll through different screens with suggestions for how to look up recipes, play games, and hear the news. Swiping left takes you back a screen, while swiping up brings up a few device settings, such as screen brightness. If you ask Google to turn off the screen, it goes black but still displays the clock.

There’s no search bar, but you can scroll through different screens.

When you use the wake words “Hey, Google” or “OK, Google,” a white bar appears at the top of the screen, and you’ll see what the Link View hears you saying. It’s usually pretty accurate. We did have a couple mix-ups with some of the games we played, like Mad Libs. It asked for an adjective, and we said chilly. It displayed Chile, which our fourth-grade teacher would have told you is a noun. Mad Libs is a good example of a skill that isn’t making use of the JBL’s screen. It simply displayed a logo instead of letting us read along with the story.

Recipes, on the other hand, are far easier to follow with some visual cues. Sometimes with Google Home, something that should be simple — like a recipe for roasting asparagus — becomes an ordeal as the speaker reads through 12 steps to tell you to cook it for eight to 10 minutes. With the screen, you can do a quick scroll, if your hands are clean enough. The same is true for Spotify playlists, which the Link View displays in a scrollable list when you ask Google to show them to you.

The screen is so close to solving one of our biggest pet peeves about the Google Home, which is the timer situation. Between playing NPR and converting measurements, setting kitchen timers is one of our most-often-used tasks for the Google Home in our kitchen. Yet if you have two counting down simultaneously and one goes off, the device doesn’t tell you which it was. The JBL doesn’t do this automatically (why?!), but you can ask it to show you both timers. Even if you don’t name one “rice,” it will show that it was a 20-minute timer, so you know which is going off.

Since it’s powered by Google Assistant, the Link View can control many smart home devices. This is again a weird hybrid of more control than just a smart speaker but less than a phone app. Take the Nanoleaf Aurora. It’s easy enough to say, “OK, Google, set the Nanoleaf to yellow,” but we had a hard time changing it to “scenes,” which involve each panel being a different color and cycling through them in various patterns. On the JBL, when you ask Google Assistant to switch something on the Aurora, a rudimentary version of the app comes up on the screen. It also doesn’t have the scenes, but you can change brightness and select colors like “tomato” instead of red.

This is a weird hybrid of more control than just a smart speaker but less than a phone app.

In addition to NPR, we listen to a lot of podcasts. We could go on about how the dulcet tones of Michael Barbaro sound coming from the Link View, but perhaps that’s not helpful. JBL’s pedigree as a speaker company does really shine, through, with full, rich sound that definitely competes against similarly sized devices. We ran through the same playlist we used for the Echo Show — Madonna, Jawbreaker, and Violent Femmes — and found them all more than acceptable for a kitchen speaker. There doesn’t seem to be a way to adjust the settings, except for the volume, though.

The microphone was fairly responsive, but as we had the JBL Link View and the Google Home a room away from each other, sometimes they battled for who would answer. Sometimes the Home would butt in when we were closer to the JBL, but not the majority of the time.

The JBL Link View has a one-year, limited warranty.

Sometimes fully hands-free is frustrating, and the JBL Link View eases that a bit by just showing you what you want you want to know.

Right now the new Amazon Echo Show ($230 with free Hue light bulb) and Lenovo’s Smart Display ($199) are the JBL’s biggest competition. But Google will likely come out with its own version in the near future. One of the biggest differences between the Alexa and Google devices is that Amazon doesn’t have access to YouTube on its screens. The Lenovo and JBL have the same interface, but the packages are different. The Lenovo looks more sleek, but the JBL beats it in the sound department.

One important thing to keep in mind is that speaker/screen device is 100 percent dependent on Google to run. Without Google Assistant, you really can’t do anything with it, even use it as a speaker. There’s an inherent risk, however small, in buying something that can be bricked. Other than that, both JBL and Google are well-established names in the game.

While it costs more than $100 more than the Google Home, the JBL Link View’s screen really transforms the smart-speaker experience. Because they both run Google Assistant, you can either opt for the Lenovo for style or the JBL for sound.