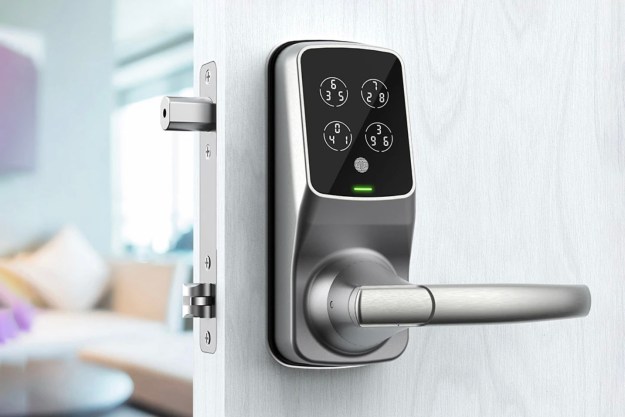 “The Lockly Duo replaces both your door latch and deadbolt, but the price is just too high.”

One of the biggest problems I’ve run into with smart home door locks is they tend to replace the deadbolt or the latch. The Lockly Duo replaces both. I have mixed feelings about this lock setup, but I think those mixed feelings come from dealing with the unfamiliar rather than failings on Lockly’s part. I do know it was nice to have both locks be smart for a change and accessible via fingerprint, key, or code.

Lockly behaves in some unusual ways. Both the door latch and the deadbolt are controlled by a single door handle. A push down unlocks both locks, and a pull up locks both locks. It definitely takes some getting used to, and despite its foreign nature, I like that mechanism. Having a single handle that releases both locks is simply easier, even if it is unusual.

Setting up the lock required a bit of work and some complex mechanisms. The lock is designed to cover a deadbolt and a door handle that are spaced either 4 inches or 5 ½ inches apart. My door is 5 ½ inches, so it worked out. Or at least it would have if my deadbolt hold had been drilled to the correct size.  As it was, in order to fit the cover plate onto my door, I had to grind about a ¼” of the door. That’s not Lockly’s fault. The cover plate itself is also significantly larger than the door latch on the outside, so it doesn’t have a great look.

On the inside, there’s an extra mechanism that mounts between the door latch and the door called an interconnection plate. This plate connects the deadbolt and door latch to the single handle. It’s not a bad device but it adds a layer of complexity to the lock that I didn’t expect. Plus, the interconnection plate doesn’t sit flush with the door handle. It’s not terribly noticeable, but when I hold a flashlight to the end side of the lock, I can see the light on the other side.

There’s no shortage of smart locks on the market, but none of them control both the latch and the deadbolt.

The Lockly Duo also has an integrated wired door sensor for Lockly’s security system.  I didn’t install that since I already have a Vivint security system installed. But the fact that it’s wired to the door handle and I couldn’t remove it was a bit annoying.

Once installed, you use the Lockly app to set up PINs and fingerprints for users. The fingerprint sensor is located on the side of the door latch and a screen above the door latch displays the buttons for the codes. Most of the time, the screen is off. A single tap usually turns it on, though occasionally I needed to tap it a second time to get it to wake up. Numbers displayed are randomized into four buttons with three digits per button. This ensures that no wear pattern develops by repeatedly tapping the same place for the same codes. After entering your code, there’s a sort of “enter” button to press below the buttons, but there’s no indication that the button is an enter button. At a glance, it looks like a fingerprint, so I initially mistook it as a way of saying: “Sure, you can enter a code, but don’t forget about that fingerprint sensor.” The button needs a better design, or it just needs to say “enter.”

The fingerprint sensor works very well, though I’m not convinced the placement is the best. When you have a door handle on the left side of the door, your natural instinct is to reach for the door with your left hand. But when you do that, your fingers face away from the sensor. The fingerprint sensor is a bit too awkward to use a thumbprint, so you end up having to reach across your body to scan a finger on your right hand, only to then use your left hand to actually open the door.

The app allows you to lock and unlock the door as well, and you are supposed to be able to pair it with Google Assistant, however, I wasn’t able to get that to work. The app itself is fairly simplistic and easy to understand. You use it to set fingerprints and pin codes. Setting up fingerprints works similarly to setting up a fingerprint on your phone. You press your finger on the sensor multiple times until the app tells you you’re done.

The app also allows you to enable “welcome mode,” and this is one of my other main misgivings with the lock. Welcome mode means your door remains unlocked on a schedule. That’s nice, but during the summer, when people are in and out all day long, it would be nice if there was a button or knob that allowed you to unlock the door. As it stands, the only way to turn welcome mode on or off is in the app. That’s not ideal.

Overall, this is a neat device, with some oddities (and a price tag) that are a little hard to get used to. It’s a great concept, to be sure. Using one door handle is a lot easier than individually locking and unlocking two locks. You still get the security of a deadbolt, along with the convenience of a single door handle. There are some quirks here like the inability to leave the door unlocked without using your phone and the oversized mounting plates for the lock. The handle also sticks out quite a bit, which actually interfered with my screen door. A lot of these are minor issues that can certainly be addressed in a 2.0 product.

But at $450, you really don’t want compromises from a door lock. That’s way over twice the average smart door lock on the market. That’s a high price to pay for what amounts to a little convenience. I normally leave my door latch unlocked because, until the Lockly, only my deadbolt was smart. Having a door lock that works for both the latch and the deadbolt is great, but I’m not convinced it’s $450 great.

The fingerprint reader and code panel on the Lockly both work great. There’s no shortage of smart locks on the market — check out our list of favorite smart locks — but none of them control both the latch and the deadbolt. Is that the best thing in the world? It’s certainly convenient. There have been times I’ve locked myself out of the house when I forgot to unlock the door latch. That’s never a problem with this lock.

For about the same price, there’s the ultimate smart lock in the Lockly Vision. It’s the Swiss Army knife of smart locks because it incorporates all of the modern conveniences, but serves double duty as a video doorbell as well. If you prefer something a bit more discreet, the Level Touch looks like an ordinary deadbolt lock on any door and doesn’t have the distracting keypads and bulky latches typically associated with smart locks. And lastly, there’s the August Wi-Fi Smart Lock, which is notable for its moderate price, easy installation, and incredible security features.

I have no reason to suspect this door lock will not last. It’s built with durable materials. The Locks are backed by a five-year mechanical and finish warranty and two-year electrical warranty. The gap in between the interlock plate and the door handle gives me pause, but it’s on the inside, so it should be affected by rain. In general, I have no durability complaints.

No. There are specific reasons why you would not want this lock from a functional perspective. If your door doesn’t have an awning or other weather protection, you’ll find the fingerprint sensor and code panel are very sensitive to rain and will basically stop working. If you don’t like the door handle aesthetic and prefer doorknobs, you should pass.

But the main concern I have is in the pricing, which is very steep. Put simply, you can buy a smart door latch and a smart deadbolt, and still have money for a few packs of batteries before you hit this price threshold. Lockly needs to bring the price down before it’s considered a solid buy.