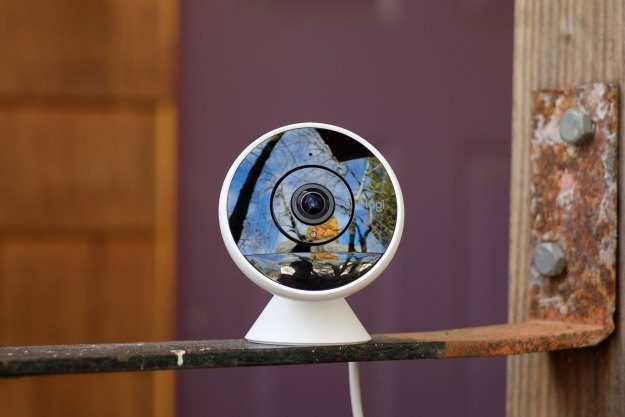 “The Logitech Circle 2 adds effortless security to your home.”

With its friendly round face and modern white exterior, the Circle 2 from Logitech is one of the better looking smart home cameras we’ve tested. Mounted atop its conical stand, we can’t help but recognize it as a modern descendent of the iMac G4 — at least in product design. It’s approachable, happy even, in the way that so many smart home cameras strive to be but don’t quite manage.

Fortunately, the Circle 2 is more than just a friendly face. We found it a capable home security camera in our Logitech Circle 2 review, but as is increasingly common with such devices, paid membership is required to take advantage of its more robust features.

Even without membership, the Circle 2 is a decent offering at $180 for the wired version (a wire-free version, not tested, is available for $200). However, budget-minded shoppers who don’t need high-end security features can save money elsewhere. The $20 Wyzecam covers all the basics, although the Circle 2 offers more potential.

We were struck by how easy the Circle 2 is to set up. While the process of attaching the mount feels a tad unfamiliar, everything else is seamless. Download and launch the mobile app (iOS or Android), and it automatically connects to the camera without any user input. You will have to enter your Wi-Fi password, but that’s about it.

The Circle 2 is also among the most versatile security cameras for smart home integration. It works with hubs from all three of the major players (Amazon, Apple, and Google), and offers live-streaming to the Amazon Echo Show or to your television via FireTV.

The Circle 2 is among the most versatile security cameras for smart home integration.

The Circle 2 is smaller in person than it looks in photos, and the included stand can be mounted to a wall or ceiling. A flexible neck allows the camera to be oriented in almost any direction, and you can simply rotate the camera within the mount to level it.

While we could only test the default mount for our review, Logitech offers several others. The Plug Mount lets you plug the camera directly into a wall outlet, eliminating the messy wire. This won’t work in every room, but it’s probably the cleanest and most effortless way to add a smart camera to your home if you have an outlet in the right position for it.

The Window Mount is another novel mounting solution, as it holds the camera face out on a window pane. You can then monitor the exterior of your home without putting the camera outside (although the Circle 2 is weatherproof, and a weatherproof extension cable is available if you do want to install it outside).

Good things come to those who pay

You must create a Circle Safe account with Logitech when you activate the Circle 2. By default, you’re put into the Free plan, which offers one day of encrypted cloud storage. The Basic plan extends that to 14 days for $4 per month, and the Premium plan pushes it to 31 days for either $10 per month, or $100 per year. Storage space, however, isn’t the only thing that changes with the different membership levels.

Out of the box, the Circle 2 offers a decent lineup of features, including motion detection, two-way audio, 1080p resolution, live-streaming, privacy mode, alerts, and a nifty Day Brief option that compresses a selection of the day’s recorded activities into a 30-second time-lapse video. Premium members get even more, including advanced event and alert filters, person detection, customizable motion sensing zones, and more control over the Day Brief feature.

Paid membership is required to take advantage of the most robust features.

These pay-gated abilities are useful. Logitech’s person detection, for example, worked well in our experience, and when combined with alert filtering, the app can be set to only send notifications when the camera sees a person — as opposed to your dog or cat. The motion zone options are also considerably better than what we’ve seen from other smart home companies, offering multi-point masking control to set custom shapes that can be positioned anywhere in the frame. One oddity is that motion zones are set via the web app and can’t be accessed in the mobile app.

Alerts will work with any membership level and include a “notification snapshot” that embeds a frame grab within the alert so you can quickly preview the event without opening the app. Premium members get a bonus here, as the snapchat uses person detection to zoom in on the person (or other object) that triggered the camera, making it easier to see exactly what went on.

Premium membership is also the only way to get any sort of geofencing capability. However, geofencing is for alerts only — not recording. You won’t be inundated with notifications every time you walk in front of your Circle 2, but if you’re the paranoid type and don’t want the camera to creepily record you while you’re home, you’ll need to remember to manually switch it to privacy mode.

This seems like a bit of a missed opportunity, and we’d like to see Logitech add a location-based privacy mode in the future. Footage is AES 256-bit encrypted, so as long as your password is safe, nobody else should be able to check in on you. Still, many people don’t like the idea of being watched at home, and your Tinder date may be particularly put off by it.

As a way to entice customers to upgrade, new users are treated to a free trial of Premium membership, which means you’ll initially have the Circle 2’s full feature set unlocked. While the idea of paying more for increased cloud storage is expected, putting useful features behind a monthly fee is annoying, and something we tend to be quick to reject. Unfortunately, this appears to be the new normal — another smart camera we quite liked, the Canary Flex, now reserves similar features for paid membership.

While we tested a sole Circle 2 camera, Logitech also offers Home membership options specifically designed for multi-camera households. Just like standard memberships, two versions are available: Home Basic for $7 per month or $70 per year, and Home Premium for $18 per month or $180 per year. The plans offer the same features as the single-camera plans, but support up to five cameras.

The Logi Circle mobile app (available for iOS and Android) is one of our favorite smart camera interfaces yet. All the fine-tuning options are hidden away in the menu, leaving the full screen area open for video playback. The app is fixed in landscape orientation, which keeps the focus on the camera feed.

When viewing the live feed, you can simply tap anywhere on the screen to bring up the controls. On the right, you can swipe down to review any motion-triggered event, or up to select the Day Brief option. You can also filter events to only show those considered “high activity,” or those that contain a person (assuming you have Premium membership).

The Day Brief feature can be a fun way to review the activity that went on in your home.

Resolution is advertised as 1080p (720p and 360p are also options, which will hog less bandwidth) but as with other smart home cameras, image quality isn’t amazing. There’s also considerable distortion due to the incredibly wide, 180-degree lens (equal to the D-Link Omna Cam 180). The upside is the ability to monitor an entire room if you place the Circle 2 against a wall. You can also select smaller fields of view within the app. That said, it’s a security camera, and it gets the job done.

As with other smart cameras, the Circle 2 can have trouble getting exposure right. A bright light (or window) in an otherwise dark room can throw it off, causing the camera to expose for the light while the rest of the room turns to near black. When the environment is fully dark, infrared night vision takes over, but the camera’s sole IR LED isn’t quite enough to illuminate the entire 180-degree field of view, leaving a heavy vignette around the center of the frame. Night vision is also advertised as effective over 15 feet, a bit less than some competing cameras.

Logitech offers a one-year warranty on the Circle 2.

With a rich feature set, good design, fantastic app, and simple mounting solutions, the Logitech Circle 2 is impossible to ignore. We particularly like the Day Brief feature, which can be a fun (or funny) way to review all the activity that went on in your home. We also feel that the camera is priced appropriately at $180, although we have concerns about features being limited to the most expensive membership subscription. We would also appreciate stronger privacy controls via geofencing and scheduling. Still, the Circle 2 is a great home security product for users who want a simple, single-camera solution.

It feels like new smart home cameras are coming out every day now, so there is no shortage of options. Among weatherproof cameras, the Canary Flex is perhaps the closest competitor that we’ve tested — it lacks some features, gains others, and includes a battery. We appreciate that Logitech offers the Circle 2 in both wired and wire-free versions. At just $20 more, the wire-free model isn’t a bad value.

We have no reason to suspect this camera will fail anytime soon considering its weatherproof design. Logitech does advise keeping it out of direct sunlight to avoid damaging the optics and sensor, but that’s a common issue for cameras.

Yes, but we urge you to consider the cost of Premium membership — $10 per month — in your purchase decision. The Circle 2 is a fine camera at the free level, but there are cheaper options that can do most of what it can do. With a Premium membership, however, the Circle 2 becomes a must-have.

Update: Logitech has added notification snapshots and multi-camera membership plans to the Circle 2. We have updated the article to include information on these new features.