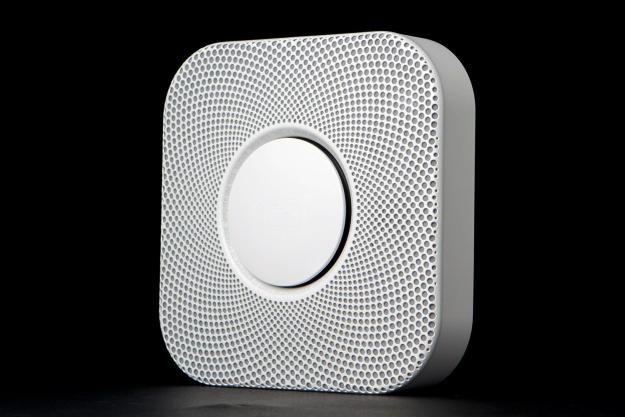 “Functional and far smarter than your old smoke detector, the Nest Protect is back -- minus the gesture recognition. But more work is still need to make the smart home truly brilliant.”

After a brief hiatus, Nest’s innovative smoke and carbon monoxide detector, the Protect, has returned — albeit somewhat technologically chastened.

Originally designed to solve, among other hassles of the modern home, the problem of blaring and frightening false alarms, the Protect came with a gesture recognition feature that allowed owners to shut it off with a wave of the hand. It was a novel approach to quieting a ceiling-mounted device without a step ladder. Unfortunately, the Protect could be inadvertently shut off with the wrong gesture, so the company withdrew the product from the market for about two months. It’s back now, minus the gesture recognition. Does it still have enough smarts to justify its $99 price tag?

The Protect can still be remotely monitored over a Web connection using an app. It connects to a home Wi-Fi network, without the need for an extra hub attached to a router. And it will work within the same Nest app used for the company’s thermostat, although there is limited coordinated functionality between the two.

Several Nest Protects can work in conjunction, however: When one starts sounding an alert, say, in a remote room in the house, the alarm will be relayed to the others nearby on the network so that an owner will still be able to hear the horn.

While we wouldn’t characterize the Protect as sexy, it does put an attractive face on what is otherwise a dull utilitarian object. It comes in white or black with a single large button, around which there’s a ring that glows green (indicating that all is well), blue (it’s working on a connection), yellow (there may be a problem or a message), red (there’s definitely a problem), or white when someone walks near the device in the dark. The last feature, called Pathlight, can be shut off.

The Nest Protect requires 6 AA batteries (there’s a wired version, as well, for the same price) and it contains a photoelectric smoke sensor and a carbon monoxide sensor. There are also heat, light, motion, and ultrasonic sensors. Once it’s online, the Protect performs a daily check to make sure it’s working properly.

To set it up, one downloads the Android or iOS app and makes a wireless connection to the Protect. After entering some basic information, such as your Wi-Fi password and the location of the device (bedroom or entryway, for example), the detector connects to your home network and you then have remote access to the device.

Remote access amounts to information about the Protect’s status, when the last software update was installed, when you last performed a manual test, and any alerts should an emergency arise. Additionally, if you’ve ever wasted hours trying to pinpoint which detector in your house was chirping because the batteries were dying, you’ll appreciate the fact that the Protect will alert you in the app that the batteries are low — and in which detector. No mysterious chirping necessary.

The Protect will alert you in the app that the batteries are low — and in which detector. No mysterious chirping required.

The Protect should be installed in the same manner as a traditional detector, in a place with good airflow but not directly above any heat sources, such as a stove or fireplace. And yes, you’ll have to put in a few screws to hang the device (it’s intelligent, not magic).

When you push the Nest button to conduct a test, a female voice counts down to the alarm, and then once it’s over announces, “Everything is okay.” The spoken instructions may initially seem superfluous — and a little too casual, if you ask us — but they can be helpful when they inform you in which room a detector senses a problem, for example. (The company also claims spoken alarms are more helpful than a lone horn in waking some children.) Naturally, when the alarm sounds, you’ll also get a notification on your phone, something second home owners will appreciate.

We couldn’t test the CO sensor without creating a dangerous situation, but like other models on the market, the Protect is UL tested and approved. The CO component also has one feature that coordinates actions with the Nest Thermostat. If dangerous levels of CO are detected, not only does the alarm sound, but it also will instruct a gas furnace-connected Nest Thermostat to shut off the heat, since that is typically the source of the problem. Now that’s smart.

Those concerned about privacy should note that, yes, the Protect does record activity in its presence. The main idea is not to spy on families but rather to communicate information to the Nest Thermostat and improve the accuracy of its “Away” mode in turning down the heat or A/C when no one is home.

As with the smart thermostat space, the Nest Protect is not alone. Kidde has a $50 combination smoke and CO alarm, for example, that also has warnings on an app and sounds alerts on other networked Kidde models. However, an additional $50 Wink hub (available at Home Depot ) is required to enable the online functions.

Nest’s real appeal — aside from the aesthetics — is the promise that some day, hereto-forth dumb home devices will become coordinated and smart. That day has not quite arrived. But Nest now also owns Dropcam, and they are both in turn owned by Google. So expect to see more integration between these devices and the rest of your connected gizmos over the next year.

Smart home tech for your office