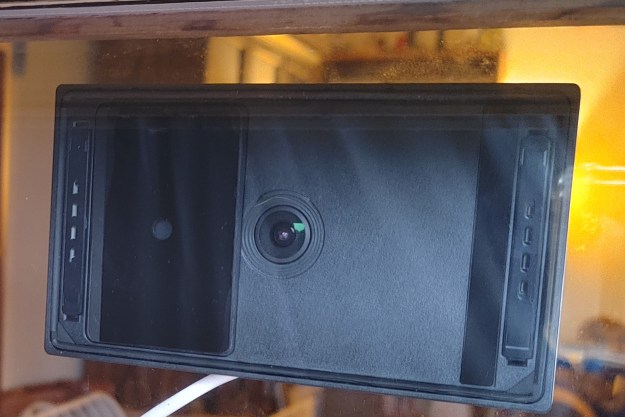 “The Homehawk Window has amazing color night vision without the need for a spotlight.”

There is no shortage of security cameras on the market today. I’ve seen a lot of them, so when a camera takes me by surprise, I notice. The Panasonic Homehawk Window is one such camera, and it’s a project three years in the making.

On its surface, the HomeHawk Window is a window-mounted security camera. That’s not much of a surprise. Cameras like the Logitech Circle 2 have been doing that for years. The standout feature for the Homehawk Window is its night vision capabilities. The 150-degree camera has a proprietary sensor that is capable of delivering color night vision with as little as .2 lux. That’s seriously impressive, so I wanted to find out how they made that work.

The engineers of the HomeHawk had two major obstacles to overcome in order to deliver a window-mounted camera with night-vision capabilities. The first was to design the housing to protect the sensor from reflections from inside the home. Most exterior windows are double-pane, so there’s a sheet of glass on the inside and one on the outside with a cushion of air in between. It’s easy to block reflections from the inside pane, but the outside is more troublesome. The 16:9 aspect ratio of the camera’s body matches the ratio of the sensor so the body blocks most of the reflection.

The second problem comes in the form of color night vision. The Arlo Pro 3 has color night vision, but only because of its integrated floodlight. Most cameras will use an infrared light and sensor to deliver a black and white image. The problem with IR on window-mounted cameras is that the glass causes a huge glare in the image, making night vision troublesome. The engineers at HomeHawk consulted with other divisions in Panasonic — namely the engineers at Lumix and Panasonic’s professional security division — to figure out how to overcome this obstacle. The result was a proprietary, high-sensitivity CMOS sensor with high dynamic range.

The result is amazingly good. The easiest way to describe it is to compare it to something like Night Sight on a Pixel phone. The difference is that Night Sight uses a series of long exposures stitched together with A.I. to deliver a brightly lit scene. The HomeHawk delivers that with real-time video. If that sounds wild, that’s because it is.

Below you’ll see three images. The first is taken with a Pixel 4a with Night Sight turned on. It took about 30 seconds to get that shot, which is why it looks like an odd panda monster with a ponytail for a face. The second is shot with a LG V60 with night mode turned on. It’s less awesome. The third is a still taken from the HomeHawk Window footage. That fact is, the image is always that bright, even at 4 a.m. There’s no loss of detail during the day either.

The video is not perfect. At night, it’s fairly low resolution and pixelated. You can still make out enough detail to identify people, especially if they’re close enough to the camera to actually constitute a threat to your home. During the day, that’s not a problem at all. Video is crisp and clear.

I’d also like to see Panasonic do something about the fisheye effect. A camera like the Vivint Outdoor Camera Pro has a wider field of view with a less pronounced fisheye look. Overall though, it’s a pretty good trade-off considering how good the night vision is.

The easiest way to describe it is to compare it to something like Night Sight on a Pixel phone.

The HomeHawk Window ships with the camera itself, detailed mounting instructions both for temporary and permanent fixtures, power cable, and hooks for cable management. Clean your window thoroughly. Then, to mount the camera to your window, remove the film from the suction mount and place it firmly against the window and pull the lever to engage the suction. That’s it. Plug in the cable, insert a microSD card (up to 32 GB) if you want to record anything, and then fasten the back plate.

Once mounted, the camera sits firmly in place. An LED on the back indicates that power is on, and it turns red when recording is in progress. There is a fan inside the camera and that can be heard when you sit near the camera, but it’s not terribly distracting. That covers the hardware.

Unfortunately, now I need to tell you about the app. It’s not great, but there are some highlights. You have a lot of control over when your camera records an event, whether it’s due to motion, just people, or 24/7 recording. As you record new footage, old footage will be discarded. According to Panasonic, 32 GB of storage will get you about 10 days of recordings.

It’s hard to tell the camera when to automatically record though. When you first enter the app, there’s a “Basic” icon at the top, with no indication as to what it is. I ignored it for the first few days. I accidentally tapped on it once and suddenly I was able to configure what mode to put the camera into, which in turn defines what will be recorded. This was a bit of a watershed moment, as you can imagine.

On the surface, it’s a good idea to have presets that determine when the camera records video. But the interface is not intuitive at all; I literally stumbled upon it by accident. Automatic recording of events is essential though, because that’s all the camera will do. It can be set to record 24/7, but that is also buried behind that button I didn’t know was a button.

The Home Hawk has no cloud storage subscription, personal or otherwise. What you get on the memory card is what you get and that’s fine. But there’s no way to move a video to your phone. You can take snapshots, and those will save to your photos album. But videos remain on the memory card. That’s a very basic function and seems like a missed opportunity.

Navigating between pages in the app is slow, and often causes a loading animation. Plus the app has some organizational issues. For example, you can get to camera settings from multiple different paths. Overall, in all honesty the app is just a weird experience that seems like it was thrown together at the last minute.

The app has some high points though. You can stream live footage from the camera; that’s easy to access. And you can access the livestream and recordings via the app when you’re away from home to check in on things. The videos you capture can be organized into the hour they were taken. You can filter your recordings by motion, person, or manual recordings. When playing back the footage, the app will show you what it saw moving by drawing a blue box around it. That’s clever and lets you know what you should be paying attention to.

There are a host of other software features, including a network strength indicator that I found to be a nice touch. It happens often that you place a camera and only later discover the Wi-Fi coverage isn’t good enough. You can also set boundaries and sensitivity for motion detection. Finally, the HomeHawk Window integrates with Google Assistant and Alexa, which is always a win in my book.

Overall, this is an impressive first effort to develop a window-hugging camera with really good night vision. Panasonic has work to do with the app and with the resolution of the camera at night, but I don’t really feel like this color night vision is a party trick. I see it as a halo feature and one that frankly other manufacturers should strive for. At $150, the camera finds itself at the lower end of the mid-tier pricing spectrum. That’s very not bad.

Are there better cameras? Sure. The Ring Spotlight Cam offers a much better picture at night, but that color video requires a spotlight. Overall it seems that the industry has decided that a spotlight or black and white is good enough for night time, and I can’t say I totally disagree. There’s also the fact that both work in total darkness. So, if you’re good with those solutions, then there are a host of good alternatives.

The camera ships with instructions to mount it both short and long term. Plus, the app includes a maintenance notification it can send to your phone to reseat the camera every once in a while. The housing is plastic, so it’s not the most durable camera on the market, but it feels sturdy. The camera comes with a one-year warranty.

Yes. This is a neat camera overall. It’s not the only one that affixes to a window, nor is it the only one with color night vision. But it is the only option that offers both. The ease of installation and portability make this a very nice camera with a low profile that fits behind the blinds. It’s easy to maintain, and lives inside your home, so you don’t have to worry about the elements, outside power sources, or recharging batteries.