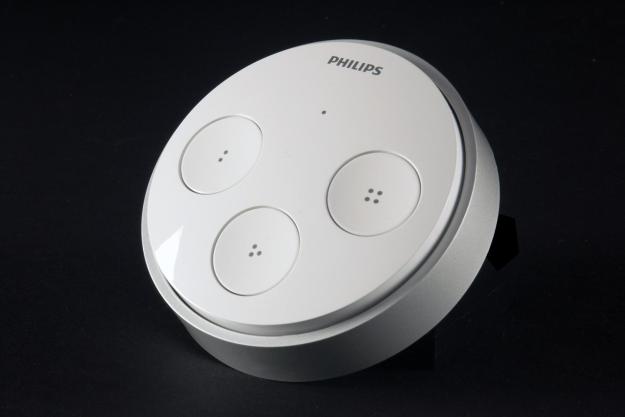 “The Tap makes controlling Philips’ Hue LED lights easier than ever, combining the customization of smartphone controls with the convenience of physical controls.”

Philips’ growing Hue line of network-connected LED lighting products ranges from light strips to programmable smart bulbs, but up until now they’ve all had one limitation: You needed an app to control them.

That ends with the Hue Tap, a round wall switch designed to control your Hue lights with four physical buttons and – amazingly – no batteries needed. We pocketed our phones and slapped one on the wall to see if the $60 switch beats a screen.

Since this thing is designed to be added to your existing setup of bulbs, network hub, and accompanying smartphone app, installation is a breeze.

Assuming you’ve got all the other Hue hardware up and running, all you need to do to set up the Tap is fire up the app, tap a button or two to complete the sync, and then assign different functions to each button. From start to finish, the entire process only takes about a minute — maybe two if you count the mounting process. Speaking of which, getting Tap on your wall is also quite simple.

The device comes with two adhesive strips affixed to its rear, so mounting is as easy as peeling off some protective plastic and pressing Tap against the surface of your choosing. This means you can install it practically anywhere — not just next to your existing switches or near a power source.

Aesthetically, Tap is nothing to write home about: It’s a white puck with four buttons. But functionally it’s nothing short of brilliant.

First and foremost, and as we mentioned before, the cord- and battery-free design means you can mount the Tap wherever it would be most convenient. And it can fully detach from the wall mount, so you can pop it off, carry it around, and use it more like a remote. Sure, that’s what your phone is for, but it’s still a nice to park it on a coffee table, desk or nightstand when you don’t want to get up or fumble with your phone.

You can install it practically anywhere — not just next to your existing switches or near a power source.

Second, it’s more functional than your average wall switch. Each of the four buttons can be programmed to activate different lighting presets. You do need to build these preset scenes with the Hue app on your smartphone first, but once they’re mapped to the different buttons, pressing them will activate the scene instantaneously.

This might not sound particularly groundbreaking, but it’s huge. It helps alleviate one of the most fundamental flaws of smart lighting — the fact that opening your phone, firing up an app, and navigating to the desired function is often far more cumbersome and inconvenient than standing up and flipping on a switch. Tap essentially gives you the best of both worlds: access to advanced functions, as well as fast, convenient activation.

Tap’s coolest feature, however, isn’t its programmable buttons or ability to moonlight as a remote control — it’s the fact that it does all of this without any batteries or external power. The device doesn’t require any outside electricity to run. Instead, Tap is powered by nothing more than kinetic energy. It uses the force you apply with your finger to generate a tiny bit of electricity, and uses that energy to fire off an RF signal that tells the Hue Bridge what to do. No cords, no burning through batteries, no more power lost to always-on vampire devices — it just works when you need it to.

When we first installed this thing, we were worried that it might not be terribly reliable, or maybe even have some lag problems because it’s not constantly connected to the network — but boy were we wrong. When you press the button, the corresponding light scene pops on almost instantaneously. If there’s any lag, it’s so brief that it’s practically imperceptible.

The range of the device isn’t excellent, but it’s pretty good for a gizmo powered by kinetic energy. The signal it puts off won’t travel through thick walls or floors, but as long as you’re within a reasonable distance (Philips claims 50 to 100 feet) from the Hue bridge or any bulb that’s drawing power, you can activate and deactivate your presets for any light in the house.

That’s because all Hue bulbs essentially form a mesh network through the open standards protocol called ZigBee Light Link. Each bulb can send and receive signals, and then relay them to the bridge. Since you’ll almost always want the Tap to control at least one light nearby, and that light is a gateway to every light in your house, the short range should be a nonissue for most owners.

Despite its small size, Tap is a big addition to the Hue family. It breaks some of the Hue app’s most useful functions free from the digital prison of your smartphone, and brings them into a more easily-accessible physical location. In so doing, Tap effectively solves one of the biggest problems in smart lighting — the fact that firing up your phone and navigating to the necessary app is oftentimes more time-consuming and inconvenient than simply standing up and hitting a switch. This, combined with the existing functionality provided by the Hue app, helps to round out the Hue ecosystem, making it more user-friendly and convenient than any other smart lighting setup you can buy. At $60 a pop, it’s a tad bit expensive for a light switch, but in our opinion, if you’ve already got a Hue lighting system in your home, the added convenience is well worth the damage it’ll do to your wallet.