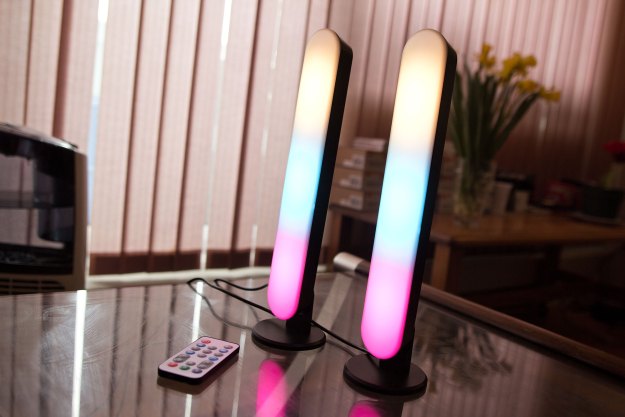 “For such an inexpensive light, the Tuya Ambient Light Bar offers plenty of functions. A lack of brand recognition drags down confidence in security, however.”

The smart lighting landscape tends to be dominated by the big players like Hue and Nanoleaf, but the function they deliver often doesn’t justify the premium they demand. While there’s a wealth of cheap alternatives out there, complete with app support, it’s hard to go all-in with a brand that hasn’t been well-established in the public eye. In that spirit, a pair of Tuya Ambient Light Bars landed on my doorstep not long ago. The box set off the usual red flags when it comes to buying devices from unknown origins, like strange capitalization choices and minimal graphic design. Let’s see if the reality lines up with the expectations.

In adition to the two roughly foot-long light bars, there were a pair of screws in the box, alongside an Allen key and mounts that could be attached either at the end or in the middle of each unit. Adhesives were included to slap the light bars on the back of your TV, and cable managment loops were there for the linked USB DC power supply. There was also a little infrared remote included so you wouldn’t have to go digging through the app. Build quality on the remote was pretty questionable, but hopefully the app covers all the bases.

I was a little nervous about downloading software from new sources, especially given the sketchy first impression. The 4.7-star rating out of 10 million downloads on the Google Play Store inspired a bit more confidence, though I still used an alternate e-mail address to register just in case it got roped into some shady spam mailing lists. That hasn’t happened yet, thankfully.

Once the app was installed, initiating the Bluetooth pairing was straightforward using the toggle button built directly into the power cable. After punching in my Wi-Fi login information (another nail-biter given my earlier trepidation), I was greeted with an unexpected wealth of functions.

First off, I hadn’t realized how many other devices leveraged this Smart Life app. Smart plugs, smart cameras, industrial irrigation controllers, fridges, washing machines, and everything in-between were all on the “add device” screen. This built confidence in the app, but also introduced some bloat. A whole section dedicated to energy saving and weather wasn’t going to be useful to me. As for the functions specific to the Tuya Ambient Light Bars, some of the presets were rather goofy, but users have full granular control over lighting recipes.

The music sync feature took a little while to figure out, but eventually I found that the lights used a microphone built into the cable rather than audio from your phone. Though performance wasn’t perfect, this helped with responsiveness compared to the software-based music sync I’ve seen elsewhere. It also introduced more security concerns. I’ve already handed my Wi-Fi password over to a Chinese mobile app I’m not super-comfortable with, and now it has access to a hot mic with an internet connection in my house. Folks may be able to take that plunge for established smart speaker brands, but I had trouble shaking my privacy concerns. The recurring pop-up reminder that the app was running in the background of my phone every time I switched out from it didn’t help.

All of that aside, I was actually quite pleased with the light quality of the Ambient Light Bars. Transitions were smooth, the light was even and diffuse, and the app was responsive, with loads of control. It’s possible to build light recipes with a range of animation styles, but there are no home screen widgets, unfortunately. The lights use RGBIC, so they have fine independent control of 15 sections in each unit. A tie-in with Google Home meant skipping the Smart Life app altogether if I only needed simple functions. Timers and schedules were all there. Given the form factor, they could easily tuck behind appliances or furniture to generate indirect lighting.

While digging around to find more information on the lights, it became clear that they’re being sold to multiple brands. The model I received was from Up Tech, while I found the exact same one on Amazon bearing the Juylux brand and some snazzier packaging. It’s hard to get a bead on security or reliability when a product is getting this sort of white label treatment.

In the end, this really set the tone for my overall impressions. Without a clear idea of where these lights are coming from, it impossible to know who’s accountable for things like my Wi-Fi password or home audio data, In case of hardware issues, would the retailer actually help, or would I be bounced between them and Tuya? Established brands can answer questions like these much more thoroughly.

The Philips Hue Play bars are about three times the price, but are designed to support display sync, and have added brand confidence. Govee Smart Light Bars also have feature parity, are only $15 more, and instill a fair bit more confidence.

The Juylux version of the Ambient Light Bars includes a three-year warranty. They seem rather fragile. There’s actually a warning on the back not to tilt the lights back and forth in the base once they’re screwed in. So long as they’re tucked away and not dealing with much physical contact, you should be fine for awhile — but don’t expect them to survive for years on end.

If you’re strapped for cash and need just a little bit of extra direct lighting, this is certainly an option. I’d be more prone to spending a little extra money on more established brands that I’m familiar with. I don’t need a mic in my lights that badly.

Best indoor smart gardens
The best smart Christmas trees
How to deck out your pad with smart home gadgets for the holidays
The best outdoor security cameras for 2022
Philips Hue starter kits just got discounts for Black Friday
You can save $170 on the Dyson Corrale straighteners today
Should you buy a Keurig on Black Friday or wait for Cyber Monday?
There’s a huge Instant Pot Black Friday sale happening right now
This robot vacuum is $119 for Black Friday, but it’s selling fast
9 Sonos tips, tricks, and little-known features
Make Starbucks at home with this coffee maker — $99 for Black Friday
Black Friday: These Roborock smart vacuums and mops are smartest of the bunch
You can buy an Amazon Echo Dot for $15 today, because Black Friday