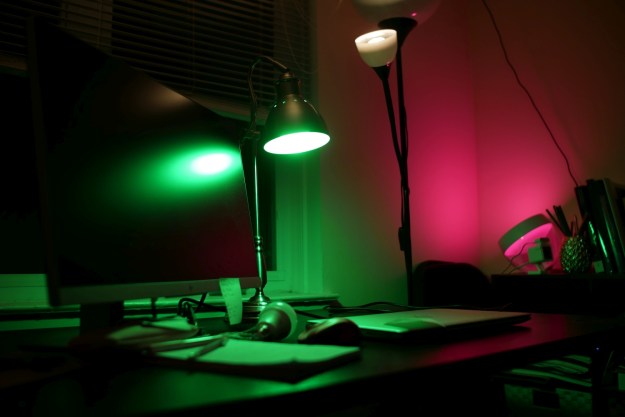 “It's so good and cheap, you may never go back to Philips Hue.”

Anyone who has expressed interest in upgrading to smart LED light bulbs knows the brand Philips Hue. You could say it’s the Apple of smart lighting based on the countless positive reviews of its bulbs and the brand loyalty that’s been established through the years. However, its bulbs can be pricey.

That’s why for the last couple of years, I’ve enjoyed a few, cheaper alternatives. Xiaomi’s Yeelight fetches a mere $27, which is a considerable savings over the $50 you’d pay for a single Philips Hue color-changing bulb. Even better were the Sylvania Smart+ bulbs I’ve been using in my bathroom. A 4-pack costs just $35.

Now we have yet another new contender in the space with the Wyze Bulb Color. After finding success in a variety of spaces in the smart home, Wyze is making a ruckus in the lighting category with its $35 color-changing bulbs.

One of the biggest downsides of going with cheaper alternatives, much like Xiaomi’s Yeelight, is that they tend to not be that bright. Thankfully that’s not a problem for the Wyze Bulb Color. In fact, there’s no comparison as far as its peak brightness compared to the Yeelight and Sylvania Smart+ — it’s noticeably brighter.

That’s due to the 1100-lumen brightness it’s able to produce, which makes it a 75-watt-equivalent bulb. By comparison, the Sylvania Smart+ and Yeelight are 60-watt-equivalent bulbs. Placing the three bulbs side by side, there’s no question that the Wyze Bulb Color has the strongest light output. It holds true for all daylight colors temperatures, in addition to colors.

It’s cheap, but rich in performance.

And what about the mighty Philips Hue A19 bulb I’ve been using for years now? While there’s not as big of a disparity, the Wyze Bulb Color is still brighter — albeit, by just a narrow margin.

Ask anyone who has dealt with a variety of smart home gadgets, and they’ll tell you how annoying it is to set up a bridge. In my particular situation, I have few available Ethernet ports on my router to install a bridge, so it’s a relief that the Wyze Bulb Color doesn’t require one to work. Instead, its connectivity is restricted to Wi-Fi.

Setup is a breeze using the Wyze app for Android, which briefly required me to connect to the bulb’s Wi-Fi network before proceeding to automatically connect to my home’s Wi-Fi network. The app is fairly straightforward, with controls for brightness, color modes, automations, and scene modes. If you prefer using your favorite smart home ecosystem, you’ll be happy to know that it offers support for Amazon Alexa and Google Assistant. Voice controls work like a charm after getting it set up through the Google Home app, allowing me to group it with other smart lights for room-by-room control.

I was skeptical about its saturation levels, mainly because most low-cost bulbs I’ve used fail to produce enough brightness and saturation to make colors pop. Again, the Wyze Bulb Color impressed me with the intensity of its color saturation. Blues and reds are particularly saturated and vibrant, so even a single bulb does a wonderful job at equally distributing enough saturation wherever it’s located.

The design of the Wyze Color Bulb doesn’t deviate from anything else I’ve come across. It’s mostly plastic, which is good because, unlike traditional incandescent and CFL (Compact Fluorescent) bulbs that use glass, the plastic won’t break as easily in the event the bulb gets hit. Life expectancy is 25,000 hours, but there’s a 1-year limited warranty that covers defects.

For the price, not really. Wyze’s name in the tech space is continually growing, so I feel its products are more reputable than other cheaper alternatives you can probably find online.

Yes, it’s only $35 for a 4-pack. That’s cheaper than just buying a single Philips Hue color-changing bulb for $50.

How to use smart ambient lighting
Best smart ambient lighting by room
Best smart patio lights under $100
Best smart outdoor floodlights
The 8 best smart home products that aren’t made by Google or Amazon (or their subsidiaries)
The 6 best robot vacuums for carpet
Best oven deals for September 2022
HelloFresh Free Trial: Can you get your first box for free?
This massive French door air fryer is insanely cheap today
The iRobot Roomba and Braava Jet have sweet discounts today
How to sell your parents on a smart assistant
Best Amazon Echo Deals: Get an Echo Dot for $25
Keurig’s new SMART brewers offer a mind-blowing amount of coffee drinks