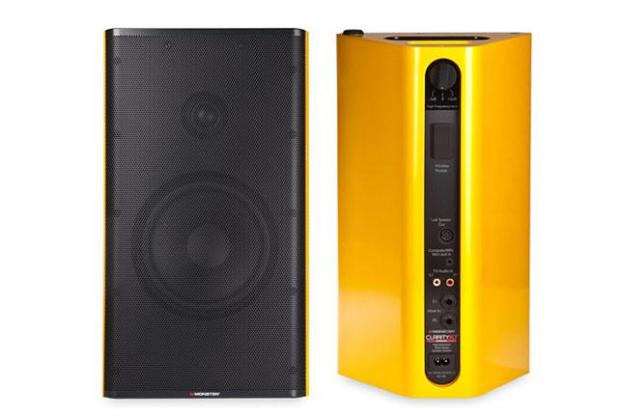 “On the whole, we think the Monster Clarity HD Model One is a terrific sounding speaker. What trumps the speaker’s sound is its convenience and versatility.”

As we walked into the space Monster (formerly Monster Cable) had taken over at CEDIA 2011, we were immediately drawn to the front of the room by some trapezoid-shaped, shiny red and yellow speakers. But, it wasn’t the speakers interesting shape or nearly eye-blistering color that had us ducking and darting past Monster’s PR reps and marketing gurus (all fine people, mind you), it was the sound that was coming from them. There was something distinctive about the high frequencies we heard and, as we learned from closer inspection, the speakers sound on the whole. Hold on…Monster makes these bookshelf speakers?

As it turned out, Monster had announced the Clarity HD Model One High Definition Multi-Media Speaker Monitor (that’s a mouthful! How about “Clarity HD” for the sake of brevity) was to begin shipping two months earlier in mid-July. Well, shame on us for overlooking that press release and an extra hand-slap for assuming that a bookshelf speaker made by Monster would necessarily sound just like a Beats by Dr. Dre headphone.

The Clarity HD managed to produce some beautiful sound in the cavernous event room at CEDIA (and, as we learned during the press briefing had quite a few tricks up its sleeve); but an oversized banquet room is no place to test a speaker, so we requested a pair for review and got to work checking out the $750/pair powered speakers once they arrived.

In our Clarity HD Model One review we aim to describe the speakers versatility and sound and rank them against powered speaker cohorts such as the Pioneer S-DJ05 and Paradigm A2.

The Clarity HD struck us as being rather lightweight as we pulled them from their boxes. Having recently heaved around the 15 pound (each) Pioneer S-DJ05’s, we were anticipating a little more mass from the roughly 16 x 9 x 6.25-inch Clarity HD speakers. We didn’t pull out the bathroom scale, but considering the pair’s shipping weight comes in at just 21.5 pounds we figure each speaker is at or under 10 pounds. Those that frequently equate weight with quality will need to set that notion aside for the moment because, as we’ll soon reveal, weight has nothing to do with how well these speakers sound.

In the box with the pair of speakers we found a 6 foot AC power cable, what we estimate to be a 15-foot long DIN cable and a tiny card-style remote control.

Monster gets an A+ for a comprehensive speaker design that remains remarkably simple. A single AC power cord juices up the right hand “control” speaker, where, on the back panel, we also find all of the speakers’ inputs. While the Clarity HD do not have balanced XLR inputs like the S-DJ05 do, they do take two ¼” TRS connections (L/R), a stereo ⅛” headphone plug and stereo RCA connections. Connecting the left hand speaker requires only the provided DIN cable.

Sitting atop the right-hand speaker is an iPhone/iPod docking connector. Obviously, this allows for a quick and easy iPhone or iPod connection, but it also charges your iPhone or iPod and allows for remote control of the device. Better still, should tethering your phone become bothersome, Monster makes an AAC and apt-x compliant Bluetooth adapter that plugs right into the back of the control speaker. This allows the user to stream much higher quality audio than is possible with standard Bluetooth directly to the speaker. Neither the A2 nor S-DJ05 we tested offer either of these options.

Another slick feature is the fact that the Clarity HD will mix and amplify any number of its inputs simultaneously. That means you could potentially connect three electronic instruments – say, a drum machine, electric bass and laptop computer or DJ deck-and have yourself a little jam session. That’s not all that Monster did to make the Clarity HD friendly to the road-weary musician either. The speakers are very light and each provides a recessed handle at the top of its cabinet.

Speaking of cabinetry, it’s here that Monster seems to have trimmed a lot of excess weight. Rather than use a high density fiberboard, the speakers are enclosed with structurally reinforced, glass filled ABS (plastic). Initially, this caused us some concern since, in the speaker design world, dense wood products are usually preferred for their acoustical inertness. However, when we rapped our knuckles on the sealed cabinetry, it bit back a little and the resulting sound was fairly dead. Rather, we got a sort of high-pitched snapping sound. Interesting.

Let’s not forget the guts of this system: Each speaker is loaded with a 6.5-inch woofer and 1” silk dome tweeter outfitted with active crossovers and bi-amplified with digital amps. Based on all of the specs, the speakers seem to have real potential. So how did they do in our listening tests?

To test the Clarity HD Model One speakers we used an iPhone 4S, a Fender Precision Bass, Korg Triton keyboard and a Dell Laptop computer feeding audio to an Anthem Integrated 225 and Aperion Verus Grand speakers through a NuForce uDAC-2 connected via Monster RCA cables. Test tracks included music files ranging from lossy 128k MP3 right up through WAV and FLAC files as well as standard CD and test tracks including frequency sweeps and pink noise.

We placed the Clarity HD Model One speakers in a number of different places within two different rooms. One was a cavernous, open space with few reflective surfaces nearby, the other our modestly sized audio evaluation studio.

On the whole, setting up and using the Clarity HD Model One speakers was super quick and remarkably easy. During our testing, we only ran into one hiccup: When using an older iPhone 3G and an older iPod model, we noticed that the volume of our devices would stay fixed at whatever volume they were set to prior to docking. If we tried to adjust the volume up or down with either the device itself, the speaker’s on-board volume dial or the provided remote control, the volume would change accordingly but once we stopped turning things up or down, the volume would slowly slide back to its original setting. We contacted Monster about the issue and feedback from representatives at Monster indicated that neither Monster nor Apple technicians were able to duplicate the problem. Thus, it is believed that the anomaly is due to a fault restricted to the specific review samples that were sent. Given these speakers have been out for a while and there don’t appear to be any discussions surrounding a similarly reported problem, we’re satisfied with the explanation.

Hearing the speakers perform in our smaller space, it was apparent to us why it is they caught our ears so quickly. The Clarity HD Model One’s tweeters are very capable and tend to be pretty bright. The speakers feature a high frequency level dial that adjusts the tweeters’ response from +2db to 0db(neutral) to -2db. We set the dial at -2db and never looked back.

Throughout our testing, the Clarity HD continued to lean toward the bright side. Fatigue never became a problem and we admired the tweeter’s tight attack and brilliant shine. However, we did feel as if the very top-end sounded a little artificial and tinny – an attribute we could do without, though we readily admit we’re extremely critical of tweeter performance.

The Clarity HD’s midrange performance is, without a doubt, its strongest attribute. We found the midrange performance to be honest, spacious and free of congestion. The vocal tracks we listened to had a healthy amount of live presence, though that effect was diminished somewhat in our extremely large testing room. Even at very high volumes, the smaller speakers weren’t quite able to fill up the massive space.

Where the highs and mids were very consistent, the bass performance was a bit more capricious. At times, we felt the Clarity HD’s bass output was tight and punchy with just enough rounding out of the bottom end to give a satisfying weight to the music. Then, a few tracks later, we’d find ourselves wondering where the bass had gone, thinking the speakers sounded a little anemic.

We considered the possibility that the inconsistency was in the bass level of the various tracks we were using but later confirmed that bass levels were within pretty tight tolerances. After some more playing around, we determined that what we were experiencing were variances in bass response depending on the source material. In other words, there seemed to be some bumps in the ole’ EQ curve below 120Hz.

While we lack the equipment necessary to take exact measurements, some frequency sweeps reproduced in our large room on the Clarity HD did reveal some minor spikes in the midbass region somewhere around 120Hz and then again at the bottom of the speakers capable range around 50-55Hz. The speaker’s response rolls off pretty aggressively around 47Hz.

Playing bass and keyboards through the speakers was a lot of fun. While we didn’t feel like the Clarity HD made a great rehearsal bass amp, what we got from the speakers was certainly fine for personal practice-so long as active pickups or some other preamp is in use. Keyboard playback, however, was full and loud enough that the speakers could potentially be used as a rehearsal amp in a small band setting. Likely, the Clarity HD would do a solid job amplifying a guitar patched through any of the number of iPad/iPhone guitar apps that are available.

On the whole, we think the Clarity HD Model One is a terrific sounding speaker. What trumps the speaker’s sound is its convenience and versatility. To have a remote controlled iPod speaker dock with three additional, mixable inputs in a lightweight, easy to carry speaker system is a pretty nifty combination. We think a little DSP would go far towards taking control of the bass and we’d prefer a slightly less aggressive treble response, so we can’t recommend these speakers as studio monitors, per se. However, these quibbles shouldn’t take away from the fact that, for around $750/pair, you get some incredible functionality from these thoughtfully designed speakers.