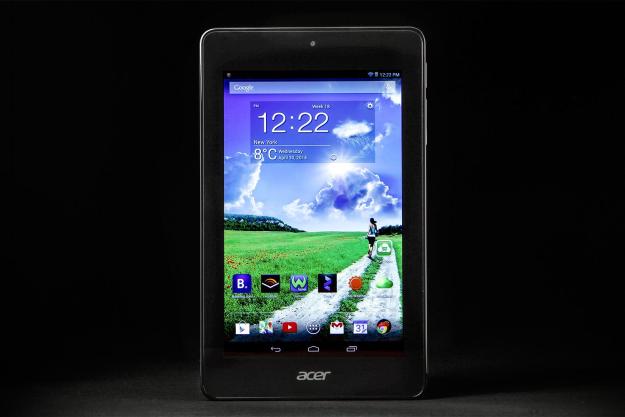 “Acer’s $130 Iconia One 7 is attractive, comfortable to hold, and performs well for a budget tablet. But the 8GB of storage (in the base model) is low.”

If you’re in the market for a budget-friendly 7-inch Android tablet, there are certainly no shortage of choices.

Just about every major PC maker has gotten in on the game — note the Asus Memo Pad HD 7, Dell Venue 7, HP Slate 7, and Lenovo IdeaTab A3000. We’re probably forgetting a few, but in general, most of these low-end slates are fairly forgettable.

Acer’s Iconia One 7 stands out in this crowded house with a textured plastic back that comes in several different colors and a good feel. It’s surprisingly pleasant to hold and is priced very low, at $130. But Dell’s Venue 7, which runs a similar dual-core Intel Atom processor is already, selling for $120 online. So while the Iconia One 7 is fairly inexpensive, it doesn’t break new ground on the value front.

It is a surprisingly capable and comfortable tablet, however, one that doesn’t necessarily scream “budget” with its looks, feel, or performance. It does have a few shortcomings, including a dim screen and battery life that would probably be better had Acer opted for a newer Intel CPU.

No low-priced tablet is going to be as thin as Sony’s quarter-inch Xperia Z2, or as light as Google’s 0.66-pound Nexus 7. But the Iconia One 7 isn’t far off on either measurement, at 0.35 inches thick and 0.71 pounds. And thanks to rounded edges and corners and a textured back to add some grip, Acer’s latest budget slate is a pleasure to hold.

Acer’s latest budget slate is a pleasure to hold.

Our review model came in basic black, but Acer says the tablet will come in several other colors, as well. The company says color options will vary by region, but we spotted at least eight shades on display at Acer’s global press conference at the end of April, where the tablet first debuted.

There’s nothing fancy in the way of buttons or ports on the Iconia One 7. Power and volume buttons are on the right side, and feel reasonably solid when pressed. Lower down on the right side is a MicroSD card slot for supplementing the sparse 8GB of internal storage on the base model. (Acer says it will also offer a 16GB model.)

The top houses the Micro USB charging port and the headphone jack. A speaker grille runs along the bottom edge in portrait orientation. That means when you’re holding the tablet in landscape mode, all the audio will be coming out of one side of the tablet. But the volume and quality of the audio output is surprisingly good for a low-priced tablet.

The screen is more “good enough” than great

The first obvious area where Acer tried to keep costs down was with the display. The 1,280 x 800 pixel resolution is more or less to be expected in this price range, as is the big black bezel.

Acer says this is an IPS panel, but don’t take that to mean that colors and contrast don’t shift a bit at extreme angles — because they do. It’s not terrible, and you may not even notice it if you aren’t used to better screens on higher-end devices, but as IPS screens go, this isn’t a good one. It also doesn’t get very bright. The screen’s brightness is fine indoors, but step out in the sun and you may not be able to tell if the screen is at max brightness or off.

All that said, the screen is fairly crisp, and we had no major issues using it indoors. It just made us miss the screen of our trusty (and $100 costlier) Nexus 7.

The Iconia One 7 runs on a last-generation “Clover Trail” 1.6-GHz Intel Atom Z2760 chip and 1GB of RAM. That’s a step up from the MediaTek processors found in some low-priced tablets, but the similarly priced model of the Dell Venue 7 runs a similar Intel chip with 2GB of RAM. And these are last-generation chips, rather than the newer Bay Trail options, which generally provide better performance and battery life.

The Iconia One 7 is plenty peppy for Web browsing, reading, and running most apps.

We don’t put much stock in Android benchmarks, as many companies have admitted to juicing their devices to increase scores. But just for some context, the Iconia One 7 scored 5,125 in the Quadrant benchmark, which measures overall performance and 6,065 in 3DMark Ice Storm Unlimited test, which is meant to measure graphics performance. By comparison, Sony’s high-end Xperia Z2 Android tablet scored 18,100 on Quadrant and 18,900 in 3DMark.

In actual use, the Iconia One 7 didn’t exactly zip and sing, but it also didn’t feel sluggish, either. And we had no problems running our favorite apps. But graphics-heavy games were a mixed bag. Galaxy on Fire 2 HD ran fine, but Anomaly 2 took over a minute to start up. Bottom line: This tablet isn’t the best choice for intensive gaming, but it’s plenty peppy for Web browsing, reading, and running most apps.

Stock Android, with an extra helping of bloat

The good news: Acer has delivered what appears to be stock Android on the Iconia One 7, although it has supplied its own wallpaper. And while the tablet ships with Android 4.2, the company promises an upgrade to 4.4 Kitkat at some point.

The not-so-good news: much like a budget-priced PC, the Iconia One 7 is loaded up with pre-installed apps, from AccuWeather to Zinio, with plenty of others in between. There’s also Booking.com, a nagging McAfee Security app, and the iStoryTime children’s book app, as well as links to WildTangent games and “Top HD Games.” Worse, most of can’t be uninstalled, just hidden. So if you plan on installing many of your own apps, you’re really going to be limited by the 8GB of internal storage on the base model.

The cameras stink, but we don’t care

Tablet cameras are generally pretty bad, but the ones here are worse than usual — even for a budget device. The rear camera is just 2 megapixels, while the front camera took us back to the early days of webcams, with its 0.3-megapixel resolution and extreme graininess. But tablets make for awful cameras anyway and you look silly using them to snap photos.

If you want a tablet for video chats, you should probably avoid the Iconia One 7, unless the person you’re calling doesn’t care much about image quality. If you want to take nice pictures, get a decent smartphone or a real camera. Photos taken with this tablet pretty much universally look awful, with lots of noise, muted, mudy colors, and heaps of missing detail.

A smarter move for next time, Acer: Ditch the rear camera altogether and put something better up from for selfies and Skype calls.

As we said earlier, the Iconia One 7 uses an older Intel Atom chip, which is likely the chief contributor to the tablet’s lackluster longevity. In medium-to-heavy use, downloading and installing apps, running benchmarks, playing some games, and surfing the Web, the One 7 began begging for a recharge after about six hours. That’s probably enough longevity to keep casual users happy, but higher-end tablets tend to get around 9 hours of use between charges.

If you’re looking for a low-priced Android tablet that’s comfortable to hold and comes in a rainbow of colors, Acer’s Iconia One 7 is a solid option, so long as you don’t care about camera quality and long battery life.

It’s not overly peppy or powerful, but doesn’t feel sluggish or underpowered, either. Just note that if you’re planning on installing more than a few apps — especially if you want to install games — the 8GB base model will feel very cramped, as there’s a fair amount of pre-install software that you can’t easily get rid of. We’d recommend opting for the 16GB model, because while you can add more storage via the MicroSD card slot, most apps need to run on internal storage.