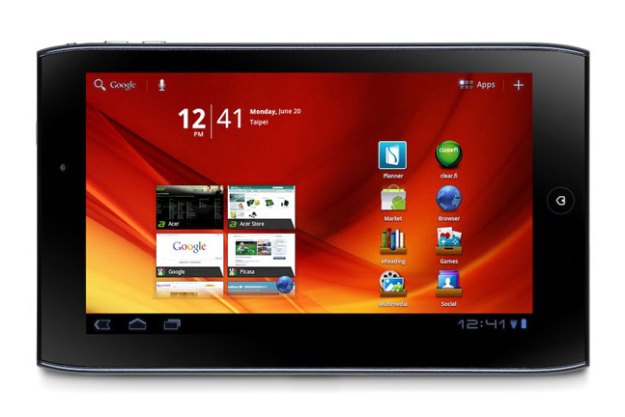 “You're going to wish it had a bigger battery, and the screen will bother you a little, but other than that, the A100 is a good 7-inch tablet and a great device to carry along in your purse or bag.”

The Iconia Tab A100 is Acer’s follow-up to its first Android Honeycomb tablet, the Iconia Tab A500. At 7 inches and $330, it’s quite a bit smaller and cheaper than its 10.1-inch cousin, but no less capable thanks to the tablet’s integration of Android 3.2 (Honeycomb). Most tablets this size have been stuck at Android 2.2 and 2.3, making them feel more like oversized smartphones than tablets. Of course, at the rate smartphones screens are growing, we have to wonder if we won’t be reviewing 7-inch smartphones in the next year or two. Until then, the Iconia Tab A100 may be a good pick for those hunting for a more compact tablet.

The A100 lacks some of the features of its larger brother the A500, like a full-size USB port, but it also improves in many ways.

For starters, it looks a lot nicer than the A500. With a dark blue plastic finish and rounded edges, the A100 doesn’t particularly stand out, but it does look and feel pretty nice. A screensaver-like wave of lines adorns the shell of the unit as well, along with the Acer logo. The front of the unit is completely flat and black, as is usually the case with tablets, but the addition of a home button on the vertical bottom is nice for reading. (Though a bit odd, being that Android 3.0 does away with the need for physical buttons.)

The A100 has most of the ports and slots you’ll need: micro HDMI, micro USB, a proprietary docking port, microSD, and an audio jack. Strangely, the placement of the cameras and speakers are at odds. To use the rear camera of the tablet, you’ll want to hold it horizontally, but to listen to music or other media, you’ll want to hold it vertically, because the two speakers are located on the same side (bottom) of the device. Speaker location seems to vary a lot from tablet to tablet, but most 7-inch devices seem to favor one orientation or the other. It’s not a big problem, but Acer doesn’t seem to be ready to decide.

The only problem we have with Acer’s hardware is the screen. Though it’s a lot brighter than the A500’s screen and certainly doesn’t have the issues we’ve seen with Motorola smartphone screens, the Iconia Tab A100 has a restricted viewing angle (75 degrees) and is a bit too reflective. Though we got used to it, our initial thoughts on the device were tarnished by the shiny, distorted colors produced by the reflection and low viewing angles. The blacks and Tron-like blues in Android Honeycomb are particularly affected by the reflection issues. We did get used to it and the screen does display colors brightly at 600 x 1024 pixels, but give this one a try before you buy if you’re particularly sensitive to screen issues.

It may be smaller, but the A100 packs the power of a 10.1-inch tablet. Like many of its larger brothers, the A100 has a 1GHz dual-core Nvidia Tegra 2 processor, 1GB of RAM, 8GB or 16GB of internal storage, a 5-megapixel rear camera, and a 2-megapixel front camera. With stats like these, running Android Honeycomb isn’t a problem, nor is most anything else.

With Android 3.2, Google finally made it possible for 7-inch tablets to run Honeycomb, and Acer is the first to take advantage. The PC maker’s take on Android remains largely unchanged from its Iconia Tab A500, which means it’s pretty much stock Android, with a few small enhancements. Luckily, none of those enhancements are UI-based (as far as we can tell), meaning those who buy an A100 may actually get an Android Ice Cream Sandwich update this fall. When manufacturers add their own user interfaces on top of Android, this seems to result in huge delays on updates, making the Iconia’s vanilla interface a good thing for those who would rather get OS updates than have a custom UI.

If you haven’t tried out Google’s Honeycomb tablet OS, give it a go. It’s a mixture between some concepts from Mac OS X, Windows, Android, and other sources. Overall, it works pretty well, though we’re hoping for a more fluid, gesture-filled experience in the future.

Like the Iconia Tab A500, the A100 comes preloaded with a couple new media players — nemoPlayer and Clear.fi — which are both probably better than Google’s default player. Several nice-looking bookshelf organizing folders are also included for different app types. There are folders for e-reading, games, multimedia, and social. A SocialJogger app that combines your Facebook and Twitter streams is also available. Docs To Go, some syncing apps, and TegraZone are included as well, along with the regular assortment of Google apps.

There still aren’t a ton of tablet-ready apps for Android, but the small size of the A100 means that using smartphone apps isn’t as ugly or unappealing as it is to someone on a 10.1-inch tablet. Some of them run quite nicely and look fairly natural. Still, we have to wonder why Facebook hasn’t created a tablet app yet. The A100 comes with a link to the Facebook site. Facebook, we know you don’t like Google, but don’t take it out on your users.

As usual, the Web browser on the A100 is stock Android Honeycomb, and it isn’t too great. We’re hoping that Google gets with the picture and has the Chrome team design a browser for Android. Until then, we’re stuck with what we’ve got, which is probably as good as the iPad Safari browser, but certainly no better.

Don’t buy the A100 for its camera. While it’s not the worst in class, Acer is merely treading water when it comes to picture and video quality. Even outdoor pictures tend to come out somewhat flat and colorless — sometimes with a bit of a tint to them. It’s nothing particularly atrocious, but when compared to the BlackBerry PlayBook, the picture quality looks bad. With that said, the LED flash is a welcome addition, and not often found on tablets. As for the front-facing camera, well, it gets the job done. You’ll mostly be using it for video calls — if you use it at all — and for that it does quite nicely.

This is a weak spot for the A100. Because of its small size, but large specs, the A100 suffers from low battery life of approximately four to five hours of active use. If in a standby state, the battery can last days, but when you’re using it, the A100’s 1530mAh battery drains at a fairly rapid pace. For reference, the BlackBerry PlayBook comes with a 5300mAh battery and the HTC Flyer has a 4000mAh battery. It’s safe to say that both of them easily outlast the A100’s disappointing battery life.

We like the Acer Iconia Tab A100. On the outside and inside it is one of the best overall tablets with a good price and specs that rival any tablet on the market today. Unfortunately, its battery life is pretty bad compared to other tablets, and its screen has a low 75-degree viewing angle and overly reflective covering. Yes, we realize that the screen and battery life of a tablet are two of its most important attributes, but despite its defects, we still like the A100 and the travel case Acer sells with it.

You’re going to wish it had a bigger battery, and the screen will bother you a little, but other than that, the A100 is a good 7-inch tablet and a great device to carry along in your purse or bag.