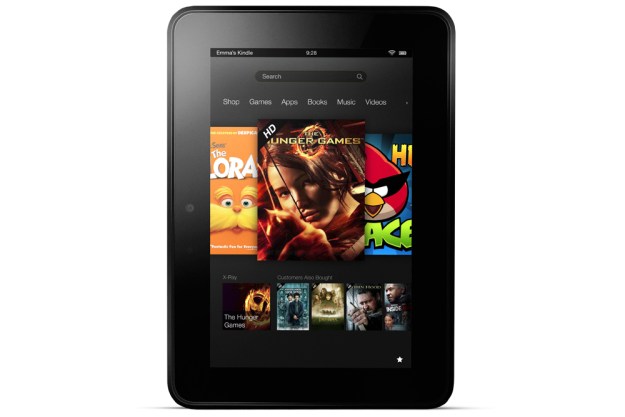 “This is a good device for people deeply invested in Amazon's products and services. Even for a low-cost device, the performance issues lower the Fire HD's desirability.”

Amazon’s Kindle Fire tablets have never represented the ‘best’ of anything, even in the low-cost Android tablet. However, they do offer a nice gathering place for Amazon’s vast media offerings. From eBooks to digital video to apps, Amazon is the content king, and if you own a lot of this content, the new Kindle Fire HD 8.9 is a good way to experience it. If the 7-inch Fire HD is too small, take a look at big brother. It shares the same design, operating system, and multimedia chops. It also shares the same flaws as the smaller version, including less than stellar performance.

The 8.9-inch Kindle Fire is almost indistinguishable from the 7-inch version except for size (and a few specs). It bears the same uninspiring design, large bezel around the screen, and a matte, soft-touch back. It’s still boring, though at least not uncomfortable to hold at a larger size and heavier weight. It doesn’t feel too heavy for it’s size, though is still heavier than the Nook HD+ by almost 2 ounces.

Just like the 7-inch model, the power button, and volume toggle is ridiculously hard to find by sight as well as by feel and are hard to press. Users will eventually remember they’re on the left side in the default landscape orientation, but the placement doesn’t fall naturally under the hand, so you might still have to look.

Compared to the $270 Nook HD+, the Fire HD’s design is inelegant and not as comfortable.

The edge-to-edge glass on the front covers an 8.9-inch IPS display with a full HD resolution of 1920×1200 pixels. As we’d expect with this screen technology, the Fire HD’s viewing angles are wide, colors bright, and blacks deep. Plus, the screen doesn’t full up with smudges too quickly. We wish that there was somewhere to put our thumbs that didn’t result in smudges over time, but at least we didn’t reach for a cleaning cloth every few hours.

The 8.9-inch Fire HD is particularly suited to the type of well-rounded media experience Amazon wants to offer its customers. Between the Android games, music, TV shows, and movies accessible from the cloud, it’s possible to take your media library everywhere and actually enjoy it.

Two speakers sit on the back of the Kindle Fire HD, right at the left and right edges of the tablet. Because they sit right on the taper, the speakers don’t get completely muffled when you set the device on a hard surface. Add to that the excellent sound quality coming from said speakers and you have a good media platform in the Fire HD. Even with some background noise, you won’t necessarily need headphones to listen to music and watch video due to the speakers’ loud volume.

A screen capable of showing 1080p video with every pixel intact means that watching movies and TV shows is a particular pleasure.

The larger Fire HD runs the same modified version of Android as the standard Kindle Fire HD 7 with the same drawbacks. You can see the Androidy underpinnings of the Kindle Fire if you squint, but it’s completely possible to ignore them. Amazon’s interface prioritizes simplicity, ease of use, and the company’s product offerings. However, the interface sometimes hinders smooth interaction.

The inability to customize the Home screen is probably the biggest issue. Instead of allowing owners to place their favorite apps, books, albums, and other content here, as the Nook HD does, the UI drops you back to a carousel populated by the latest apps, books, music, etc. you just accessed. To see anything else, you must dive down into specific sections, listed along the top of the screen.

What’s good about this is that you’re never far away from Amazon’s content, which is the main reason for owning this tablet instead of comparable devices on the market. Access digital media you’ve already bought, which is stored on the cloud, and then shop for more in just one or two taps. It can sometimes be hard to differentiate from the store and what you own, and what’s available right now and what needs downloading. The interface is streamlined and not cluttered, but that doesn’t make it easy to navigate.

While the Fire HD is an Android device and does run Android apps, owners can only download them from Amazon’s app store. The selection here is wider than that offered by Barnes & Noble for the Nook HDs, but it lags way behind the hundreds of thousands available for unfettered tablets in the Google Play Store.

Owners will find many popular apps in Amazon’s store and might not mind the restrictions. What is lacking is a good replacement for some of Google’s core apps. In particular, the email app is inferior when compared to Gmail, and the Calendar app needs help. Replacements are available in the store. Still, such basic apps should be great out of the box.

Still with the ads

The Kindle Fire HD’s starting price of $300 will get you a tablet that advertises at you every time you unlock the device. Want to get rid of the ads? Pay an extra $15. It’s possible to buy the Fire HD without ads from Amazon and some retail partners (choose “Without Special Offers”). If you get one with the ads, it is possible to kill them by paying the extra $15. You have to contact Amazon directly to do so.

Since the ads and special offers show up every single time you unlock the device, they’re hard to ignore and, frankly, annoying.

The no ads version of the Fire HD is even more expensive than the Nook HD+, which is already less expensive to begin with at $270 and doesn’t include ads at all.

In benchmark tests, the Kindle Fire HD 8.9 scored above the Google Nexus 7 even though it runs on a dual-core 1.5-GHz TI OMAP 4470 processor compared to the quad-core Tegra chip inside the Nexus. Still, in actual hands-on use, the Fire HD 8.9 proved frustrating, just like the 7-inch version. In general, things went along smoothly when playing games, watching HD video, or scrolling through content. But then the tablet would freeze at odd times, get all stuttery when turning pages in full-layout magazines, and require multiple taps before opening an app or book. These issues weren’t constant, but cropped up enough in testing to be noticeable and annoying.

There are two internal storage options, 16GB for $300/$315 and 32GB for $370/$385. The models have dual-band (2.4GHz and 5.0GHz), dual-antenna (MIMO) a/b/g/n Wi-Fi that made for speedy downloads and constant, reliable connectivity. Other connection options include Bluetooth, micro USB for data transfer and charging, micro HDMI for output to HDTVs and monitors. There is no microSD card slot for expanding internal storage.

Amazon says the battery will last for over 10 hours with the wi-fi on and in our testing this turned out to be fairly accurate. We streamed video, read books, played music, and surfed the web near constantly for almost 9 hours when the battery hit 15 percent. While using the tablet off and on we got almost two days use since it managed power well when in sleep mode.

Our bottom line here is pretty much the same as it was for the Kindle Fire HD 7: this is a good device for people deeply invested in Amazon’s products and services. It ties the books, apps, audiobooks, music, and other content together with a nice bow. Plus, no other tablets (except the iPads) offer access to Amazon’s video content. The $300 base price seems low, but isn’t as competitive as the Nook HD+, and that’s not even taking into account the No-Ads tax. Even for a low-cost device, the performance issues lower the Fire HD’s desirability. There aren’t many tablets in this size range available right now; here’s hoping the Nook HD+ offers better performance.