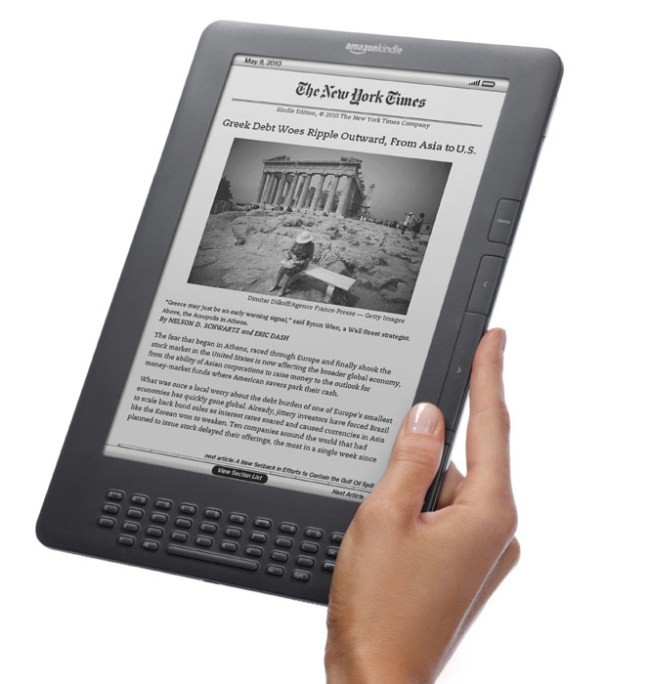 Listen up any electronics manufacturers hunting around for ideas for a revolutionary product to take the gadget market by storm – how about making an e-reader that students actually want to use?

According to results from a long-term study  that looked at how students utilized a Kindle DX e-reader for their course studies, the e-reader, while being taken up by the general population in ever increasing numbers, lacks the kind of functionality that would make it popular among students. Amazon’s Kindle DX has a larger screen (9.7 inches) than the Kindle, and currently retails for $379.

The University of Washington (UW) was one of seven US universities taking part in a pilot study of the Kindle DX.  Researchers at UW looked at how students involved in the pilot study did their academic reading.

A report on the results of the study published on Monday on the UW’s website says that students want a device that allows them to more easily take notes, check references and view figures. Switching between reading styles (such as taking a look through an article’s illustrations or references prior to reading the complete text) is another feature that e-readers need to incorporate if companies like Amazon want to have a chance of making some headway in the e-reader market for students.

One of the study’s authors, Alex Thayer, said “There is no e-reader that supports what we found these students doing.” Thayer, a UW doctoral student in Human Centered Design and Engineering, continued, “It remains to be seen how to design one.”

Another of the study’s authors, Charlotte Lee, a UW assistant professor of Human Centered Design and Engineering, said that “most e-readers were designed for leisure reading – think romance novels on the beach,” pointing out that “reading is just a small part of what students are doing.”

Seven months into the study, less than 40 percent of the students were regularly doing their academic reading on the Kindle DX. Students unhappy with the device put this down to things like its lack of support for taking notes and difficulty in looking up references. The report points out that Amazon has since improved some of these features on the DX.

Interestingly, among the 60 percent or so of students who continued to use the e-reader, some read near a computer, enabling them to look up references if necessary, while others simply tucked a piece of paper into the case so that they could write notes by hand if they needed to.

According to Lee, “e-readers are not where they need to be in order to support academic reading,” although she predicts that it’ll happen sooner than we think.

An e-reader specifically tailored to suit the needs of students would be a surefire success for any company that produced it – so long as they could make it affordable for cash-strapped students.

Topics
Video-editing app LumaFusion to get a Galaxy Tab S8 launch
How to set up and use a second line on an iPhone with an eSIM
Best Kindle deals and sales for November 2022
I used a Kindle for the first time in 10 years and it totally changed how I read
October Prime Day: Up to $100 off the iPad 10.2 and iPad Mini
The best Android games available right now (December 2022)
The most innovative tech products of 2022
How to unlock a phone on every carrier in 2022
This ridiculous smartwatch has a hidden pair of earbuds inside
This retro battery pack is way cooler than it has any right to be
Apple Health vs. Samsung Health? What I learned after using both
Samsung Galaxy S23: release date, specs, price, and all other rumors
4 tech collabs we want to see on the OnePlus Featuring co-creation platform