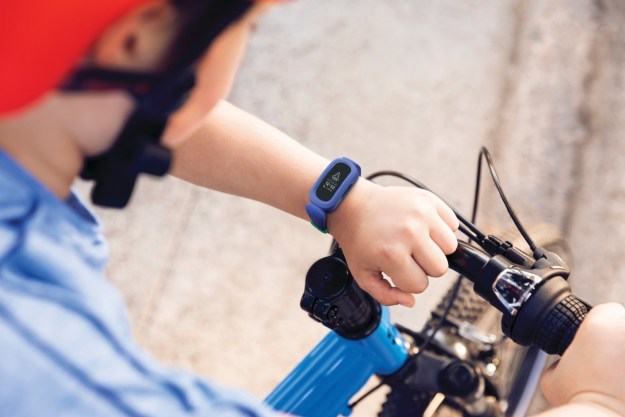 Activity trackers typically are targeted towards adults who want to get fit and stay fit. These trackers are sized for adults and have interfaces designed for adults and not kids. Though they may not be setting Fastest Known Times, kids can benefit from the health-improving effects of a fitness wearable.

Fitbit wants to reach these children with its Ace 3 tracker that offers an animated interface and a kid-friendly design. How does the Fitbit Ace 3 stand up to the demands of childhood? We tested it with a few elementary-aged kids to find out.

Though it’s a kid’s device, the Ace 3 is no slouch. It has a three-axis accelerometer for step tracking and detailed sleep monitoring. There’s even a heart rate monitor, but it is not enabled, most likely for privacy reasons. On the surface, it appears that Fitbit took its adult tracker and pared it down for kids.

The touchscreen is small enough to fit a child’s wrist but not too small for children’s hands. My kids had no problem swiping or tapping on the display. The black and white display is big enough for kids to view their stats and bright enough to be viewable outside and inside. Unlike the Fitbit Ace 2, which is completely wrapped in silicone, the Ace 3 has cutouts for the buttons, making them easy to press.

The Ace 3 is reminiscent of Fitbit’s early fitness trackers. It is comprised of a tiny fitness tracker unit that fits into a rugged silicone band. The band is sized for smaller wrists with a standard watch clasp that is easy to use. My kids, 8- and 10-years-old, had no problem taking the band on and off themselves. It was comfortable to wear day or night and we had no issues with any skin rashes. We did take some preventative measures that minimized skin irritation. After a day of outside play, we took off the tracker and washed both my kid’s wrist area and the tracker.

Though not as slim and sleek as Fitbit’s all-in-on trackers like the Charge 4, the Ace 3 modular design is perfect for kids who tend to be hard on electronics. When the band breaks, it is easy to replace. Simply pop out the tracker unit and drop it into a new band. Be prepared to replace the band, especially if your kid likes to take the tracker on and off. We broke one band in our testing, while the second has withstood the test of time.

The interface sticks to basic step counting and doesn’t overwhelm your kids with advanced metrics like heart rate analysis or calorie burn. It offers a handful of fun clock faces that my kids loved. Our favorites were the animated ones that change along with the fitness stats. The rocket ship, for example, moved closer to takeoff as the step count neared its goal. When they reached their goal, the rocket took off with a blast, much to my younger kid’s delight. I did find that the younger the child, the more they enjoyed these animations.

Another feature we enjoyed was the family competitions, which let my kids challenge family members and friends to get the most steps in a day. We’d often find ourselves taking an extra walk around the block to get that extra step count boost. The Fitbit Ace 3 wisely uses more than one strategy to encourage your kids to move, as not every child will be motivated the same way. My younger child enjoyed the rewarding animations, while my older child seemed to be motivated more by this competition than by merely reaching his goal.

The Fitbit Ace 3 is a kid’s device and, as such, has a parental component that you must navigate. Nearly everything is done through the parent’s Fitbit account using the My Family tab in the Fitbit app. How you view your kid’s daily fitness statistics depends on whether they have their own mobile device or not. For older kids, you can install the Fitbit app on the child’s device, and they can track their stats themselves. It’s a bit more challenging to view the statistics with your younger children.

Younger kids who don’t have a mobile device need to use the Fitbit app on their parent’s phone or tablet to view their daily statistics. You can switch between two views — the parent’s view with their tracker information and a kid’s view with data from the child’s tracker. This kid’s view is simplified, making it easy for your kids to follow their progress without being overwhelmed with too many numbers.

My kids looked forward to checking their stats multiple times each day on my iPhone and frequently changing their watch faces. Unfortunately, it was a pain to switch between the kid’s and parent’s views. Every time you return to the parent view, you have to enter your password. I was unable to use fingerprint or face recognition for this authentication step so I had to type in my randomly generated, 12 character string. It was so annoying that I changed my Fitbit password to something shorter and easier to remember, likely compromising my account security for convenience.

The Fitbit Ace 3 takes the best qualities of its successful fitness tracker line and bundles it into a tracker designed exclusively for kids. The Ace 3 has a lively interface that encourages kids to move. It’s especially effective for elementary-aged kids who get caught up in the animations and family-friendly competitions. Older kids, like the rapidly-maturing tweens, may find this tracker too childish.

The main competitor to the Fitbit Ace 3 is Garmin’s Vivofit Jr 2, which offers a similar playful interface. Both are very capable trackers for kids, so you should make your choice based on the platform. If you already own a Fitbit or plan to buy a Fitbit then the Ace 3 should be your first choice. It integrates seamlessly into the Fitbit app and allows for communication with and control over the child’s device. Likewise, those with a Garmin device should stick with Garmin’s ecosystem and grab a Vivofit Jr.

The Fitbit Ace 3 will last a few years depending on your child’s age and activity level. Your child may outgrow the device before it breaks. The weak point is the clasp of the band which is made out of plastic. Because the tracker can be removed from the band, though, you can simply replace the band if it happens to break. Thankfully, Fitbit offers a one-year limited warranty that covers it from defects in materials and workmanship under normal use.

If you are looking for a new fitness tracker for your kids, the Fitbit Ace 3 should be at the top of your list. It has a comfortable fit and entertaining interface that will keep your child moving throughout the day. If you already own the Fitbit Ace 2 or a competing kid’s tracker, you don’t need to upgrade. The Ace 3 primarily offers an improved interface which is not a compelling enough reason to upgrade.