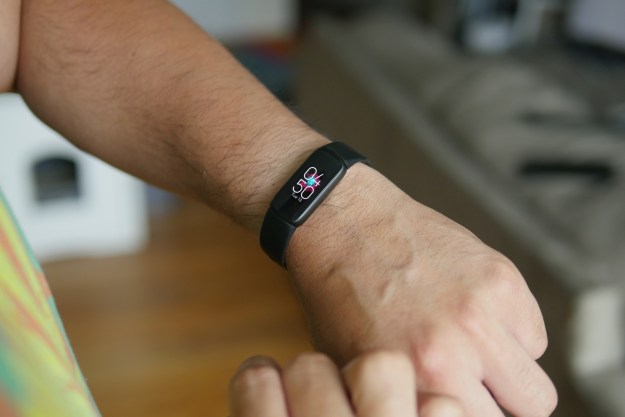 “You'll fall in love with the minimalist look of the Luxe, while it tracks everything in the background.”

It’s hard for me to believe that it’s been five long years since I last reviewed a Fitbit. That seemed like ages ago, but I suppose the reason why I stopped checking them out was because smartwatches began to rise in popularity — showing me that they, too, were more than capable with health tracking.

One of the early Fitbits I fell in love with was the Flex because it was discreet and didn’t draw as much attention as a smartwatch, which is probably the same reason that attracts me to the company’s latest tracker, the Luxe. There’s no arguing the need for a fashion-forward design, but the Luxe is competing in a time when smartwatches have substantially evolved to effectively more than cover the features in a standard fitness tracker.

Looking at my wrist, there’s a permanent untanned portion leftover by the Apple Watch that once adorned the spot. It’s a reminder of the overwhelming nature of some smartwatch designs. With the Fitbit Luxe in its place, though, I forget the sweetness of the minimalist look. I went with the black/graphite stainless steel version of the Luxe, which I have to say is a refreshing change. The black rubbery band has a subtle contrast against the graphite stainless steel chassis.

While my particular color edition of the Luxe favors a more neutral tone, something I appreciate because it remains discreet and doesn’t draw attention like other smartwatches, Fitbit offers it in two other colorful combinations — orchid/platinum stainless steel and lunar white/soft gold stainless steel.

And finally, there’s the Fitbit Luxe Special Edition, which features a gold stainless steel Parker Link Bracelet in favor of the standard rubbery band. Sure, it has a sophisticated look that effectively masks the tracker to make it look more like a piece of jewelry. While it’s not something I’d go after, I know it can appeal to individuals that don’t want to blatantly flaunt a piece of tech gear on them.

Without question, the crown jewel of the Luxe is its gorgeous AMOLED display. It’s tiny, probably less than an inch diagonal by my estimate, but that doesn’t take away from its vibrant colors, sharp details, and accurate touch responses. Its size perfectly matches its purpose: a fitness tracker that’s there to capture information in the background — all while looking and remaining discreet on my wrist.

Getting acquainted with the touchscreen’s operation doesn’t require much investment, as it heavily relies on the typical swipes used by other smartwatches. It’s fairly responsive and I do enjoy some of the minor touches, like how the screen automatically turns on when you raise the Luxe towards you, as well as covering the display with your palm to quickly turn it off.

This is the first time I’ve used a Fitbit with a color screen and it’s an upgrade I’m happy with While I’ve been mesmerized by the iridescence and larger size of other fitness tracker displays (the Samsung Gear Fit comes to mind), I find the more modest nature and smaller size of the Luxe’s AMOLED display to be equally compelling.

As with other modern fitness trackers, the Luxe provides all of the most relevant health stats on the unit itself without the need to check on a smartphone. It’s convenient to say the least, but there are some ‘lite’ smartwatch functions at your disposal — like setting timers and alarms, starting workout routines, and receiving notifications. With the latter, you can actually choose what apps you want notifications from, which is handy so that you’re not constantly bombarded by irrelevant things.

Over on the app side of things, the Fitbit app is just as rich in information and detail as it was when I last used it. Everything the Luxe tracks, the app breaks it all down. I’m particularly impressed by its sleep tracking, which gives me a sleep score similar to what Sleep Number beds offer.

However, I’m still a little shocked that the Luxe can be fooled into thinking I’ve taken steps, when in fact, I’ve simply moved my hand in a side-to-side motion. This isn’t a problem isolated to just Fitbit trackers, but it’s something I thought would’ve been remedied somehow by now. I really don’t think it amounts to anything substantial in my experience, but I can clearly see how the tracking can be skewed if you do this frequently.

As you’d expect, the Fitbit Luxe functions similar to other fitness trackers. That means it tracks steps, resting/active heart rate, your sleep, and exercises. All of this is fantastic, something I expect from any fitness tracker nowadays. Still, it’s missing one critical feature I think that could add a little bit more utility to its arsenal.

I forget the sweetness of the minimalist look.

I’m talking about a baked-in mobile payment solution. In this case, it would’ve been Fitbit Pay, something that’s available on its other smartwatch-esque trackers. I personally have relied heavily on mobile payment solutions like Apple Pay and Google Pay, even more when situations arise when I don’t have my phone on me by chance. Fitbit Pay would’ve tremendously added value to the Luxe, but it’s unfortunately absent.

Fitbit’s rating of up to 5 days is still better than most smartwatches. Take the Apple Watch for example that I use, which requires nightly charges. Amazingly, the Luxe managed to best even Fitbit’s ambitious claim by going nearly 7 full days before a recharge. In order to reduce battery drain, I only set notifications for text messages and one mobile game I play religiously. As much as I detest proprietary chargers, I understand the reasoning behind them, so you’ll want to pay extra attention to not lose the one here with the Luxe.

I still have a sweet spot for the Fitbit Flex. It was the early days for fitness trackers, and much like it, the Luxe brings back some of that nostalgia. In fact, it seems to me that the Luxe is the modern-day upgrade to the little ol’ tracker I fell in love with many years ago.

The price isn’t too shabby either. With a price tag of $150, the Luxe isn’t excessively costly in comparison to the $279 starting cost of the Apple Watch SE. While I crave more features, fitness trackers such as this one have merit in the sense that they focus on the primary fitness stuff before anything else.

Functionally, most smartwatches can be better alternatives if they’re relatively close in price. The Mobvoi TicWatch E3 and Apple Watch SE come to mind, but the trade-off for having superior utility is that battery life is nowhere close to what the Luxe offers.

Alternatively, the Fitbit Charge 4 would be a similar offering to the Luxe, but comes with a lower price tag and support for Fitbit Pay.

Fitbit designed the Luxe to be water-resistant up to 50m, so the occasional shower or hand washing won’t do a thing to it. The rubbery band may wear over time, but thankfully it’s something that can be easily swapped.

For other defects that could happen, Fitbit offers a 1-year limited warranty that would cover them.

Yes, if you really love its minimalist design. It tracks for nearly every major health metric at the moment, but it’ll also gain oxygen saturation monitoring with a future update.