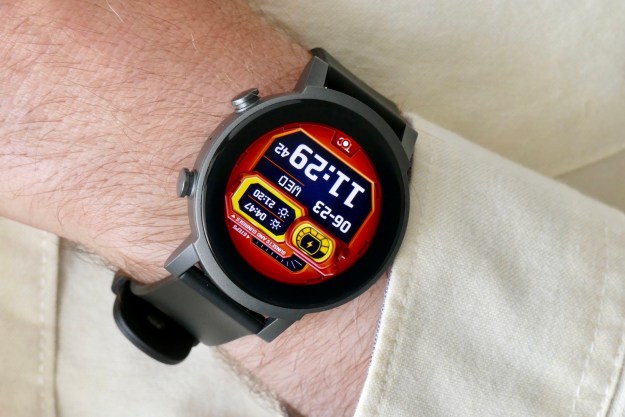 “At almost any other time, the fast Mobvoi TicWatch E3 would be a solid buy provided style isn't at the top of your list of requirements, but the lack of information on an update to the incoming Google/Samsung Wear platform means it's prudent to wait and see before diving in.”

The Mobvoi TicWatch E3 is the second smartwatch to come out with the Qualcomm Snapdragon Wear 4100 chip inside, and it’s a big deal. The processor makes Google’s Wear OS faster, smoother, and easier to live with each day, plus it improves the battery life. It’s also the number one reason you should be considering buying the TicWatch E3.

Early in the TicWatch E3’s life, the shadow of the incoming Google/Samsung Wear platform hung over it, but Google has since confirmed the new software will eventually arrive on the smartwatch, which has benefitted it a great deal. It is not a risky purchase anymore, but a rather shrewd one, as it’s going to last longer than much of the competition. However, you’ll have to have patience.

This review is an update from our original which was written before the arrival of Wear OS 3 was confirmed for the future, and we have increased its score. The reasons why are further explained in this article.

The best watches are “part” of you, by which I mean something you want to put on each morning and enjoy looking down at throughout the day, and not only to check the time. The Mobvoi TicWatch E3 isn’t that kind of watch. It is a piece of technology, where design has come second to fitting the latest processor.

Understanding that, and assessing if you’re comfortable with the trade-off, is the first stage in deciding whether you can live with the TicWatch E3. It’s not an ugly smartwatch or an uncomfortable one, it’s just bland and plasticky. Unforgivable if it cost $400, but more understandable at $200.

The TicWatch E3 looks different from the TicWatch E2, with stubby, squared-off lugs attaching a quick release 22mm strap to the simple round case, which is made of plastic. There are two buttons on the side, set at the 2 o’clock and 4 o’clock positions, which have a nicely dampened action. The top opens the app menu and the lower button defaults to Mobvoi’s TicExercise app, but it can be altered in the settings. The E3 is just under 13mm thick, and the screen measures 1.3 inches and has a substantial bezel running around the edge.

The LCD screen is bright and colorful, but the lack of auto-brightness can be a pain, and the massive bezel is a distraction. The 2.5D glass does make swiping comfortable though, and the plastic case makes it feel durable too, plus it has an IP68 rating so it can be worn when swimming. The strap is easily replaced with another, and Mobvoi will sell you some more colorful versions.

The Ticwatch E3 is neither desirable nor hateful, it’s just there on my wrist. I’ve put it on and forgotten about it until it reminds me with a notification. This is both good and bad. The smartwatch is undeniably comfortable and lightweight, but it’s not something I’ll ever look at with more than indifference due to its plain style.

Why should you care about the TicWatch E3? The main reason is the Snapdragon Wear 4100, a shocking rarity in the world of Wear OS smartwatches, and is otherwise only found in the Mobvoi TicWatch Pro 3. The fast, up-to-date chip replaces the Qualcomm Snapdragon Wear 3100, which has been ubiquitous for far too long. The TicWatch E3 may not have the looks, but it certainly has the power.

The Snapdragon Wear 4100 eliminates two of those annoying Wear OS problems, namely slow speeds and short battery life. It makes Wear OS drastically more responsive than any Snapdragon Wear 3100-powered smartwatch. It flows and glides through Tiles, quickly and without hesitation shows notifications as you scroll through the list, and even the previously lengthy setup process is considerably faster than before. Paired with 1GB of RAM, it makes Wear OS pleasurable to use, and that’s a huge step forward.

The TicWatch E3 may not have the looks, but it certainly has the power.

What about the battery life? Some Snapdragon Wear 3100 smartwatches struggle to make it a day before needing a recharge, and only a few last deep into a second day. The Ticwatch E3, if you turn it off overnight, will just about make it two working days (with a single workout tracked with GPS) before needing a recharge. That’s with all-day heart rate monitoring active, and the always-on screen showing the time constantly. Not bad at all, and if you don’t track a workout it will last about 36 hours. A handy Essential Mode kicks in when the battery is almost fully depleted, ensuring you can still see the time. Charging is slow though, with about two hours needed to fully charge.

The Ticwatch E3 runs Wear OS — version 2.26, H MR2 installed on my review model — so it operates in a familiar way, with swipes and taps to navigate the menus. There’s no rotating crown or bezel here, so the software is controlled only by your finger on the screen. By default Mobvoi’s menu system is a 4 by 4 grid of scrollable icons, rather than the standard single-line scrollable list, but it can be changed if you prefer. I found it was slightly easier to find what I wanted, but missed the way Wear OS’s menu system places the most recently used apps at the top of the list.

Some early reliability issues have not been repeated, and the smartwatch has received a small software update during the first month after release, suggesting the few bugs have been squashed. Happily, the E3 has the power to make Wear OS mostly pain-free today, with notifications being generally reliable too, once you realize you sometimes have to have a specific Wear OS app installed to receive them, as in the case of Outlook.

Google and Mobvoi have confirmed that the TicWatch E3 and the TicWatch Pro 3 will both receive the new Wear OS 3 software update, but not until the second half of 2022. So far, these are the only two current smartwatches we know that will do so. It’s a considerable benefit, as the smartwatch will only be a year into its life when it does arrive, and will keep it fresh for at least another year.

Mobvoi installs a host of its own health and fitness apps, all of which require you to sign up with Mobvoi’s services to make the best use of them. If you don’t, some data is not shown. Most of the fitness-related apps replicate the functionality provided by Google Fit, and it’s annoying the SPo2 and heart rate sensor apps both require a Mobvoi login first. Other apps include an ambient sound level app called TicHearing, a stress and relaxation app called TicZen, and an auto sleep tracking app called TicSleep.

You can use Mobvoi’s TicExercise app or Google Fit to track workouts, and either can be assigned to activate with a press of the lower button on the case. Both do the same job, and there is no benefit to using one over the other. TicExercise’s data can be integrated with Google Fit, but you need Mobvoi’s main app installed on your phone to activate this feature. Apart from TicZen, there’s little reason to dive into Mobvoi’s apps at all. Why are they there? Mobvoi calls itself a software company rather than a hardware company, so collecting data is important.

Comparing the TicWatch E3 with the Apple Watch SE, both heart rate sensors returned the same measurements, and the SPo2 sensor matched the Apple Watch Series 6. Step count and calorie burn mostly matched too, meaning the TicWatch E3’s accuracy is in line with other, similar products. The smartwatch found a GPS signal and recorded location data during a walk without a problem.

The TicWatch E3 works very well as a casual fitness tracking wearable, but Mobvoi’s own apps are mostly superfluous, with no obvious reason why you’d use them over Google’s suite of fitness apps.

You can buy the TicWatch E3 today for $200 or 180 British pounds through Mobvoi’s online retail store, or from Amazon.

There’s a good case to be made for buying the TicWatch E3. It’s not that expensive, it has the fastest processor inside, it’s light and comfortable to wear, and Google’s Wear OS software is better here than on almost all other smartwatches. It also does all the health and fitness tracking you could want. But equally, there are a few good arguments against it. It doesn’t have much style and you won’t want to show it off, plus the bezel around the screen is obnoxiously large.

It’s the news Wear OS 3 will come to the TicWatch E3 next year that has made it one to seriously consider. Because it’s one of only two smartwatches currently available that will get the new software, it is a solid long-term purchase for anyone wanting a reasonably priced, reliable smartwatch today. That guarantee of longevity simply isn’t found on many other Android smartwatches at all, and who doesn’t want their expensive tech purchase to last for a few years?

If you want the assurance of an update to Wear OS 3, your only other choice at the moment is the TicWatch Pro 3, or to wait and see what Samsung’s new Galaxy Watch 4 models bring. Alternatively, if you own an Android smartphone, then you could also look at non-Wear OS smartwatches like the $180 Amazfit GTR 2 or $140 GTR 2e, or a wearable like the $230 Fitbit Versa 3. If you own an iPhone, the $270 Apple Watch SE or $400 Apple Watch Series 6 should be at the top of your list. The Apple Watch integrates perfectly with iOS, has superior functionality when linked to an iPhone, and is a joy to own and use.

The plastic case and IP68 water resistance rating along with the easily replaced rubber strap, make the TicWatch E3 very durable. Google delivers regular updates to Wear OS, but few include notable new features. Wear OS 3 will arrive during the second half of 2022. The TicWatch E3 should therefore last for two years at least.

Yes. With the Wear OS 3 update situation all cleared up, and provided you don’t mind the bland design, the TicWatch E3 is one of the few Android smartwatches that you should consider today.

Topics
Video-editing app LumaFusion to get a Galaxy Tab S8 launch
The best tablets for kids in 2023: top picks for your kids
Best microSD cards in 2023: top picks for your computer, camera, or drone
Wi-Fi not working? Here’s how to fix the most common problems
The best phones for kids in 2023
The Garmin Vivomove Trend is a powerful smartwatch with a sleek disguise
Anker’s newest chargers are a perfect pairing for the Galaxy S23
Best tablet deals: Save on Android tablets, iPad and more
The Kindle Paperwhite now comes in two stunning new colors
Latest iPad Air is down to its lowest-ever price
There’s a big sale on Garmin smartwatches happening today
Everything Samsung announced at Unpacked: Galaxy S23, Galaxy Book 3, and more
The Galaxy S23 Ultra has a huge perk for Adobe Lightroom fans