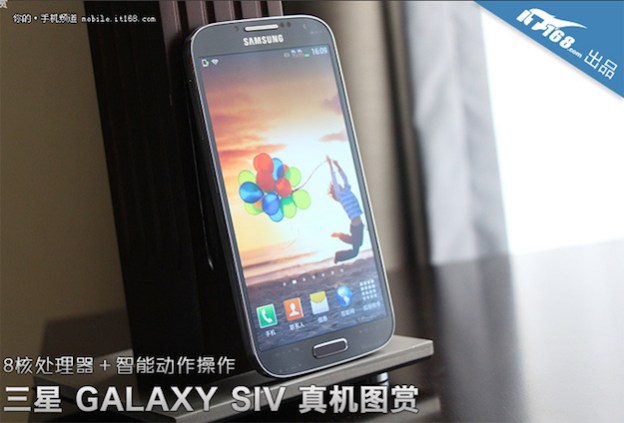 It’s launch day for the Samsung Galaxy S4, but don’t for one moment think that means the rumors have all dried up, as an extensive photo gallery showing a phone believed to be the Galaxy S4 has been published by Chinese tech blog IT168.com. The pictured phone looks identical to the model leaked earlier this week, which although initially suspected to have been disguised, the release of an official teaser image from Samsung suggested it may be genuine after all.

The smartphone in these new images also closely resembles Samsung’s shadowy device, but as they’re of higher quality than the first set, we can get a better idea of what could be revealed later today. As we already partially knew, the design hasn’t changed all that much, but the top and bottom of the phone are flatter than the more curvy S3, which could be a consequence of the larger, 4.99-inch screen.

We’ve been given a better look at the new rear panel, which now reminds us of the Galaxy S2’s, while the bulge around the camera lens looks to be slightly more pronounced that the Galaxy S3. Perhaps the rumored 13-megapixel lens needs a little more space? Also, the site has measured the device and states it’s now just 7.7mm thick, which is nearly 1mm thinner than its predecessor, and almost identical to the Apple iPhone 5.

Like the previous leak, the pictured device supports two SIM cards, and has the model number GT-i9502. The site has included a list of other specifications, including the presence of the Exynos 5 Octa processor, the 4.99-inch, 1080p display, and 2GB of RAM. Google Android 4.2.1 Jelly Bean is installed, along with 16GB of storage memory, while the phone weighs 138 grams in total.

Samsung will officially unveil the Galaxy S4 today at 7pm in New York, when we’ll finally find out for sure if we’re looking at the real thing.