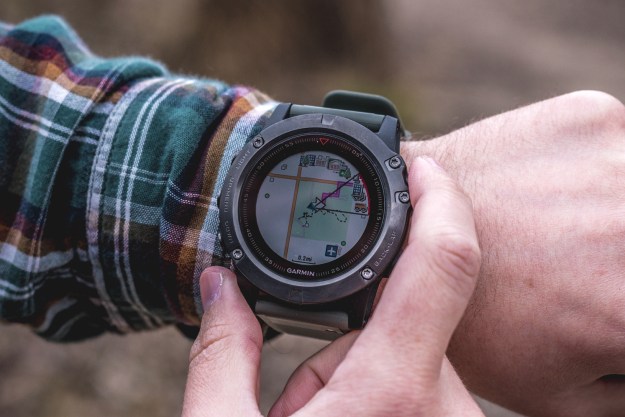 “For athletes who track their pursuits in excruciating detail, there is no better watch than the Garmin Fenix 5X at any price.”

Garmin has never let size get in the way of technology when it comes to GPS multisport watches. They pack it in and expect everyone to deal with it. And for four years, we’ve done just that. Then, in January 2017, the company officially announced that its top-of-the-line Fenix 5 series of watches would ship in three sizes — the monster Fenix 5X and two smaller versions (the 5 and 5S) for people who don’t enjoy running, kayaking, or mountain biking with big, honkin’ bundles of tech strapped to their wrists. Great news right? That’s what we thought, until we realized that not all Fenixes are created equal. While the two smaller versions can do more cool stuff than most GPS multisport watches, they are not capable of mapping or route planning. Garmin saved those extra features for its biggest, most expensive watch, the Fenix 5X. But not to worry. We didn’t let size or price stop us from checking out what Garmin’s biggest do-everything GPS multisport watch can do in our Fenix 5x review.

The Fenix 5X solidly retains its membership in what we call the BBW (big, burly watch) club with a size and shape similar to its predecessor, the Fenix 3 HR. It has the same round face and five-button layout (three on the left side, two on the right), a similar stainless steel bezel, and the identical sapphire crystal lens. The case of the 5X, which is water resistant to 10 ATMS, measures 51 mm in diameter and is 17.5 mm thick, just like the Fenix 3 HR, and includes the same optical heart rate monitor on the back. With the 5X, Garmin has bumped up the resolution of the color LCD screen from 218 x 218 pixels to 240 x 240 pixels, giving the new watch a noticeable increase in screen detail. The 5X also features Garmin’s new Quickfit watch band system that allows different bands to be swapped out quickly, easily, and without any tools.

Inside, the Fenix 5X has all the tech. Like the other members of the Fenix 5 family it includes preconfigured apps for tracking road cycling, mountain biking, walking, hiking, running (outdoors, treadmill, and indoor track), swimming (pool and open water), snowboarding, skiing (cross-country and downhill), stand-up paddling, rowing (outdoor and indoor), and yes, even golf. It also pairs via ANT+ to all manner of sensors including cycling power meters, cadence sensors, running dynamics pods, temperature sensors, and more. When paired with a compatible smartphone, it delivers smart notifications and text messages, as well of the first few lines of emails. And if what’s on the watch isn’t enough, the 5X is compatible with Garmin’s Connect IQ store, which is loaded with downloadable apps that can add even more functions to the watch.

Where the 5X stands out from its Fenix 5 siblings is in mapping. Think of the X as in X marks the spot. The 5X features full color GPS mapping — on the watch itself. This includes labeled roads, lakes, mountains, and trails with searchable items like local points of interest, restaurants, stores, gas stations, and more. Choose a location from the list and the watch delivers turn-by-turn directions for getting there. For athletes training in a new location, the 5X can also create round-trip routes on the fly. Enter a distance and general directional heading, and in about 30 seconds, the 5X returns a training route map that can be viewed on the watch, along with an elevation profile and complete turn-by-turn directions. And the 5X does all this without needing help from a connected smartphone.

The Garmin fenix 5X we tested arrived with the watch and silicone band, a USB charging/data cable, and a quick-start guide.

As with the Forerunner 935 (and the entire Fenix line), Garmin has made huge improvements in streamlining watch setup. Helpful tips giving step-by-step instructions for the entire process pop up on the watch face. We were able to download Garmin’s free Connect smartphone app (Android | iOS), create an account, and pair the 5X to our iPhone with no trouble at all. Those who already have a Garmin device synced with Garmin Connect will find it even easier to add the 5X to their list of devices.

We’re not saying it would be impossible, but it would be very difficult to get lost with the Fenix 5X’s maps running

After getting the watch out of the box, the tech we most wanted to test was the mapping. At first, we thought that having full-color maps on a watch was a bit redundant, as no one seems to go anywhere without a smartphone these days. Then one morning, we found ourselves paddling across an unfamiliar lake in a kayak with no . As we paddled up one of the lake’s twisting arms, we didn’t have to wonder what was ahead because we simply switched the 5X to map view and checked our position on the lake. Later, while charging through the forest on a mountain bike (in an area with no cell service), we began getting worried about where we were until we remembered that we had a map on our wrist. After scrolling to the map view, it turned out we were only 200 yards from a fire road. The arrow on the map pointed us directly to the road, and we were right back on track in minutes. We’re not saying it would be impossible, but it would be very difficult to get lost with the Fenix 5X’s maps running. This feature alone compensates for the larger size and higher price.

While using the maps when kayaking, hiking, and cycling worked well, we found that using the 5X to search for a place to grab dinner was not so epic. While the feature works, searching on an interface using only five side buttons is a bit clunky. And when our dinner search returned a list of restaurants that included three that were either out of business or had moved at least two years ago, we realized Garmin may have some old data in the mix. While the restaurant search feature did fall short, it was still kind of cool to have a backup data source on our wrist for those times when we didn’t have a phone.

As a daily wear watch, the Fenix 5X constantly reminded us how cool it is to have a timepiece that does absolutely everything. It automatically tracked of our steps, and counted how many floors we climbed each day. If we sat behind the computer too long, it reminded us to move and then let us know when we’d moved enough to return to our desk. For training, it tracked our road rides, mountain biking, running, and stand-up paddling perfectly. We even tricked it into tracking several skateboarding sessions at the local skatepark. The only times the watch’s large size got in the way was on rough mountain bike rides, or occasionally while swimming. On the mountain bike, the 5X tended to bang around a bit and the back of our hand got whacked pretty hard several times. In the pool, the Fenix 5X felt a little like swimming with a weighted bracelet on one arm, and we often just took it off before getting into the pool.

We got close to two weeks of charge out of the Fenix 5X’s lithium-ion battery and that’s with four or five tracked activities a week. When we plugged it in for a recharge, it was usually back to 100 percent in less than two hours. Garmin says the watch will track an activity withheart-rate monitoring on for 20 hours, so ultra-endurance athletes can depend on it for long days of tracking. We never pressed it that far, but it good to know it’s possible.

For the past three summers, we’ve lived 24 hours a day with a Garmin Fenix on our wrist. With each year’s upgrade, the experience has gotten better and better. The fenix 5X is the best yet. It is far and away our favorite GPS multisport adventure watch ever. It is handsome, rugged, and does everything we need it to do. With all the features we’re using, it’s fun to know there are even more functions that we haven’t yet rolled into our daily fitness plans. Athletes, adventurers, and anyone who aspires to be either will be endlessly assisted, informed, and yes, even entertained with the Garmin Fenix 5X.

When it comes to GPS multisport watches, we believe there is no better choice than a Garmin. Thanks to Garmin’s large line of watches, however, that doesn’t narrow the field much. The 5X is large and expensive, but it has on-the-watch mapping and route planning. If you want the maps, then the Fenix 5X is the one for you. If maps aren’t important, and having a smaller rugged watch is, then the Fenix 5 and 5s would be great choices. Those interested in all the features of the Fenix 5 in a lighter case designed specifically for running should check out Garmin’s Forerunner 935.

Garmin is constantly upgrading the software on its GPS watches, so there is no reason to worry that the Fenix 5X will be outdated when the company announces its next version of the Fenix in early 2018. Garmin’s solid history of giving older watches the same software upgrades that the newer watches get means the 5X will most likely remain full-featured for years to come. It also allows new features to trickle down. We don’t know all of Garmin’s future plans, but there’s no reason to believe that the mapping features currently exclusive to the 5X won’t make their way down to the rest of the Fenix line (and maybe even the Forerunner 935) in the near future.

People often laugh when we suggest that they need a $700 sports watch. Yes, the Fenix 5X is expensive and it includes more tech features than any one person will ever use. But for those who keep track of all their athletic pursuits and biometrics in excruciating detail and want all that data on their wrist, all the time, there is no better watch than the Garmin Fenix 5X at any price.