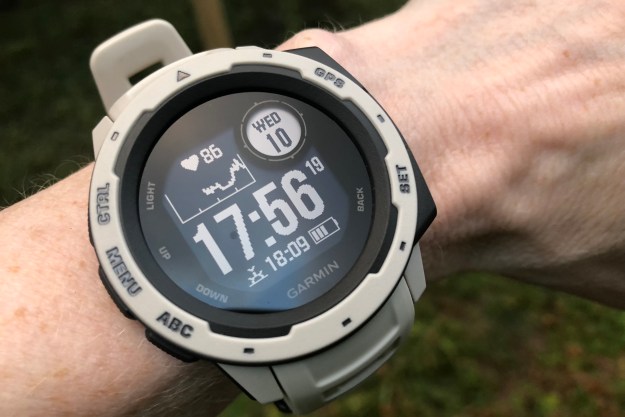 “The Garmin Instinct is a good adventure smartwatch at a great price.”

Garmin’s Fenix series is the Cadillac of adventure watches, but not everyone has $600 or more to spare on a smartwatch. Enter the $300 Garmin instinct, an affordable outdoors-focused watch that takes the best of the Fenix and houses it in a rugged, good-looking package that rivals Casio.

Does the Instinct deliver as an outdoors watch? We took it hiking, trail running, and backpacking to find out.

Rugged but not clunky

The Instinct screams outdoor watch with a look that reminds us of Casio’s hardcore sports watches. Weighing 52 grams and measuring 45mm across the casing, the Garmin Instinct is significantly smaller than the Fenix series. Its 22mm removable strap is compatible with Garmin’s other watches. The smaller size and soft silicone band make the Instinct comfortable to wear day and night.

Like most Garmin watches, durability is outstanding. The fiber-reinforced polymer casing is resistant to scratching and both the chemically strengthened glass and raised bezel protect the screen.

The 128 x 128-pixel monochrome display does the job. It’s easy to read in the sunlight and at night thanks to the backlight. It has a two-window design that is unique to this model. In the right corner is a small circular window that by default displays the date, while the rest of the display shows your stats. Though you cannot get rid of this extra window, you can customize both windows to show whatever metrics you want.

The Instinct has the standard five-button layout and user interface that Garmin employs across its Forerunner and Fenix lines. The buttons are clearly labeled, but we wish the right side buttons were a bit more prominent. They are nearly flush with the casing and difficult to press, especially with gloves on. The Instinct uses the same basic, intuitive interface found on Garmin’s other devices. The learning curve is short and once you master the interface, you can quickly navigate from screen to screen.

Garmin is know for the customizable interface on all its watches. In the Instinct, you can customize everything from the widgets to the data screens you view during workouts. The Instinct is outdoorsy on the outside and the inside. The interface has a strong outdoors focus with widgets for Sunrise/Sunset, the weather, Xero bow sighting, and InReach controls.

Sports tracking for your outdoorsy side

Like most Garmin watches, the Instinct has over 25 different activities that you can track. You can use it to track the big three – running, biking, and swimming — as well as less common activities like SUP, rowing and stair-stepping.

Activity tracking is accurate — both the heart rate and distance were similar to the Garmin Fenix 6S Pro and the Forerunner 245. During a workout, you can scroll through different data screens which are designed for the activity. Running includes heart rate zone, pace, and distance, while hiking and trail running include ascent and vertical speed which is helpful when climbing mountains. You can change these fields as needed.

I recently climbed a very steep section of a ravine and wanted to know the grade so I was able to swap out the vertical speed for the grade in just a few minutes. The Instinct also does 24/7 tracking allowing you to see steps, stairs, stress, and more.

Health and wellness on the side

The Instinct is more than just a fitness tracker. It also covers all the major health and wellness metrics such as sleep tracking, step counting, stair climbing, calorie burning, and more. The Instinct has stress tracking and offers a relaxing breathing session to lower your stress levels when they rise. There’s also a move alert that encourages you to get up and walk around when you’ve been sitting too long.

The Instinct has automatic sleep tracking, but it is on the basic side. It only monitors your heart rate and movement to break down your sleep into light, deep, and REM sleep. There is no pulse oximeter in the Instinct to detect breathing issues and similar sleep disturbances.

I also found the Instinct will overestimate your sleep, and it often could not tell the difference between laying quietly in bed and sleeping. Less-than-accurate sleep is not a deal-breaker for me, however, given this smartwatch focuses more on the outdoors.

Navigation that keeps you on the trail

The Instinct is an outdoors watch, so it’s not surprising the watch excels at GPS tracking and navigation. The Instinct supports GPS, GLONASS, and Galileo and connects quickly to these satellite systems. GPS tracking is accurate when compared to the Garmin Fenix 5X Plus.

On multiple runs and hikes, the two devices measured approximately the same distances and pace. Even though some people report issues with elevation, I had no problems with elevation. Elevation was accurate — within a 100 feet of my Garmin InReach and published summit elevations. I run the same mountain trail a few times a week and elevation was consistent between these runs.

Unlike the Fenix series, the Instinct lacks onboard topo maps which are not compatible with the low-resolution, non-color display. What you get instead are breadcrumb maps with a slew of navigation features. You can upload routes that you can follow or go back to the basics with the built-in compass. You can also add coordinates to which you can navigate.

If you get turned around on a hike, there’s a backtracking feature that helps you navigate back to the start and a compass. The Instinct’s basic navigation features saved me from getting lost on more than one occasion. On one hike, I accidentally followed an old logging road instead of the trail. I was able to use the breadcrumb map and the backtrack feature to find my way back to the original trail.

Power for a week at a time

Garmin advertises 14 days of battery life under regular usage and 16 hours in GPS mode. Based on my experience, these estimations are not exaggerated. I routinely went 10 days or more between charging and that was with daily hour-long workouts. I also used it hiking on 10 to 12 mile hikes and found the battery had enough stamina to track a day-long hike with juice to spare. The few times it ran out, it was my fault because I had not fully charged the watch before I left.

Not so smart smartwatch

The Garmin Instinct is more of a GPS watch than a smartwatch. You can receive incoming notifications on the watch, but that is about it. You cannot connect to Garmin’s Connect IQ app store. You can control music on the phone using the watch’s music controls, but you cannot add music files or install Spotify on the watch. It also does not support Garmin pay.

The $300 Garmin Instinct can be found on Garmin’s website, Amazon and other online retailers. Garmin offers a one-year limited warranty that covers defects in materials or workmanship. Take a look at some of the other best Garmin watches.

If you’re hoping to find a discount on other smartwatches, check out some of the best cheap smartwatch deals available now.

At $300, the Garmin Instinct hits the sweet spot for both features and price. It offers a suite of practical outdoors and sports features that’ll keep outdoors enthusiasts happy with a price tag that won’t break the bank.

Garmin Instinct fills the gap between expensive adventure watch and affordable fitness watch. It borrows the key features from the outdoors Fenix series but keeps the price low with an affordable, but rugged build. Though we recommend it for outdoors athletes on a budget, the Instinct is not for everyone.

If money is no object, prospective watch owners can upgrade to the $700 Fenix 6S Pro, which has all the features of the Instinct and adds a whole lot more including topographical maps, altitude-based pacing plans, and ClimbPro which displays incline. For a few hundred dollars more, the Apple Watch is also a solid choice. It may not have the detailed metrics of the Instinct but the Watch OS app store offers plenty of outdoors-focused apps.

Check our round-up of the best smartwatches for more options.

The Garmin Instinct is solidly made with a raised bezel to protect the display. We expect the watch to last at least three years under normal usage.

Yes. Outdoor enthusiasts who want some of the outdoors features of the Fenix series without the adventure watch price should strongly consider purchasing the Garmin Instinct.