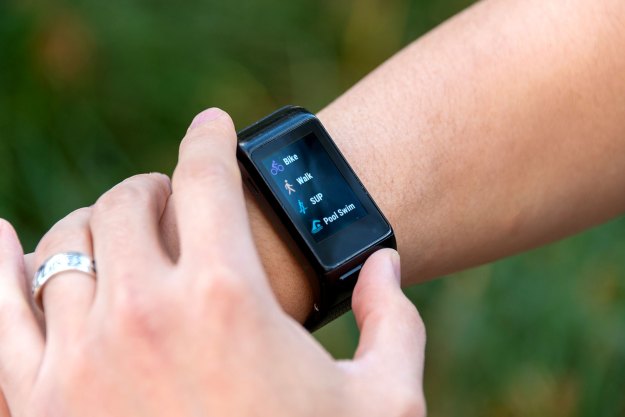 “The vivoactive HR is a great GPS fitness tracking smartwatch for people who do a little of everything.”

Garmin hasn’t let competition from Fitbit, Samsung, or even Apple slow down its quest to build the perfect GPS fitness watch for every single segment of the activity tracking market. The most recent evidence is the vivoactive HR, a latest addition to the company’s popular vivo series of fitness bands.

When we first heard about the vivoactive HR we assumed Garmin had simply added an optical heart rate monitoring to back of the vivoactive, but it did much more. The vivoactive HR is a complete redesign of Garmin’s do-almost-everything GPS fitness watch. Aside from sticking with a rectangular touch screen, everything else about the case and band have changed. The functional styling suggests that Garmin built this watch more for the fitness crowd than for fashionistas hoping to track a few activities. Where the original vivoactive was thin, sleek, and stylish (so much so that it was often mistaken for the Apple Watch), the vivoactive HR is bigger, thicker, and comes in only one color: black. The silicone strap fits the case so closely that it appears to be one piece with the case, however, the vivoactive HR’s band is both removable and replaceable.

The vivoactive HR occupies an interesting space in Garmin’s vast line of fitness tracking wrist technology. It blends the look and general shape of the company’s fitness bands with the technology found in Garmin’s high-end smartwatches like the fenix Chronos. The vivoactive HR features a 20.7 by 28.6 millimeter color touch screen display with a resolution of 205 by 148 pixels. Below the screen and part way around the roll of the bottom edge of the case are two small, rectangular buttons: both with minus signs on them. The left button controls the backlight and acts as a back button while navigating data screens, the button on the right is the start button used to start and stop activity tracking. Inside the waterproof case (resistant to 5 ATMS) are a GPS, barometric altimeter, electronic compass, and Garmin’s Elevate optical heart rate monitor.

The vivoactive HR blends the look and shape of the company’s fitness bands with the technology found inside Garmin’s high-end smartwatches.

The vivoactive HR has most (but not all) of the activity tracking features of Garmin’s high end fenix 3 line of watches. It tracks cycling (indoor and out), walking, stand-up paddling, rowing, running (indoor and out), pool swimming, and golf (with access to metrics for 40,000 golf courses). But it doesn’t have “multisport” app functionality. This means, that while it will track pool swimming, cycling, and running metrics, it cannot track a triathlon. The running functions are a pared down version of Garmin’s specialized Forerunner watches. It will record speed, distance, and pace but lacks deeper running metrics. For cyclists the vivoactive HR tracks speed and (with an optional sensor) pedal cadence, but is unable to pair with power meters. The vivoactive HR also gives remote control access to Garmin’s Virb action cameras and Varia smart bike lights. If that isn’t enough, the watch is also compatible with Garmin’s Connect IQ store were even more apps, widgets, and watch faces can be downloaded to add even more customized functionality.

The Garmin vivoactive HR we tested arrived with the watch and band, a USB charging cable, and a start-up guide.

One nice thing about Garmin’s growing range of fitness devices is that they all pair to the same free Garmin Connect (Android | iOS) smartphone app. Once you’ve downloaded the app and set up an account by answering a few personal metrics questions it is quite easy to add a new one. Click the “more” button in the bottom right of the app, scroll down and select “Garmin Devices,” then tap on the blue bar at the bottom of the screen that says “Add Device.”  The following screen has a list of all of Garmin’s products. Click on the the vivoactive HR and follow the directions. Because all the devices use the same app, it doesn’t matter which Garmin fitness device you use (from the vivofit to the Index Smart Scale) all the data are displayed in the app the same way, on the same pages, in the same colors. It definitely flattens the learning curve for those who stay in the Garmin family.

Getting up and running on the vivoactive HR is straightforward. After selecting a watch face (we chose the Pendulum because it featured date, time, and both a step and move progress bars) it was just a matter of pairing it to our iPhone. Once connected it immediately began vibrating with smart notifications. Before we could even get outside we’d received two or three. When the notification appears on the watch face it arrives with a “clear” button directly below it so with the tap of a finger it is possible to delete it, or get more detail from the message by clicking on it.

One nice thing about Garmin’s growing range of fitness devices is that they all pair to the same free Garmin Connect smartphone app.

Getting to the vivoactive HR’s data screens require a swipe up or down across the screen. Garmin’s Connect app allows easy editing and reordering of the data screens, so setting up a customized experience is simple. We’ve never been all that interested in the number of calories we burn each day, so we just hid that data screen from the menu. We are, however, constantly checking our heart rate so we moved it directly below the time of day screen on the menu so we could get to it quickly by swiping up once. This brings us to the touch screen.

Touch screens have wide appeal. The idea of swiping through screens of data and getting exactly what you want with the tap of a finger can seem magical. In day-to-day use, however, we found ourselves often wishing for buttons. For instance, starting an activity requires pressing the right “start” button once, then selecting the activity from a list using the touchscreen. After the activity is selected with a tap, the start button needs to pressed a second time to begin recording the activity.

One morning on the way to a group cycling ride we forgot to start the activity and tried to do it while riding. To get the ride started we had to press the button, then take off a glove to select the activity (the touch screen doesn’t always work with gloved fingers) and then press the start button again. Without a touchscreen it would be been three or four quick button presses that could be done with gloves on. Even without gloves the touchscreen was often less responsive than we felt it should have been. We often found ourselves swiping at the screen several times before getting it to move from one data set to the next. And having to switch back and forth between buttons and the screen seems to almost negate the benefits of having a touchscreen in the first place. These are small problems, but worth noting for those who are bothered by response lags in their tech.

When it comes to tracking activities, the vivoactive HR really shines. After starting an activity we had no problem checking in on any of the metrics we were tracking along the way. When we were finished, we stopped the activity, saved it, and the vivoactive HR synced with our iPhone and automatically uploaded the activity to Garmin Connect. Once on Garmin Connect the data can be set to automatically upload to other popular social activity tracking sites like Strava, Runkeeper, MyFitnessPal, Training Peaks, and more.

The more we test wrist-based heart rate tracking, the more convinced we are that it should not be used for getting accurate heart rates during vigorous exercise. The chart above shows our heart rate while cycling with both the Elevate optical monitor and a chest strap. The top graph is from the chest strap and the lower graph is from the vivoactive HR’s wrist monitor. Both graphs show an elevated heart rate over time, but the depth of detail delivered by the chest strap is totally missing from the vivoactive HR’s optical monitoring of the ride. Based on this ride and other testing, we believe that during exercise using a heart rate chest strap is always best. But that’s ok. The vivoactive HR can pair with any ANT+ heart rate strap and use that as the sensor. This doesn’t mean that the wrist based heart rate monitor is a waste technology and money. It works great for checking resting heart rate while sleeping, or for occasional heart rate checks during the day. It also helps the watch deliver more accurate calorie burn metrics and can show general periods of elevated heart rate over the course of the day. Which is valuable to anyone who cares about their fitness.

With one or two short GPS tracked activities a day, we found that the vivofit HR battery would last four to five days, however, in normal smartwatch mode (with smart notifications running) the watch would run for more than a week on a charge. This is a great thing to remember when compared to other “smartwatches” (Apple Watch) that need to be charged every day.

The vivoactive HR is a great GPS activity tracking smartwatch for people who do a little of everything, but don’t need deep metrics in any one activity. We found that the running, swimming, and cycling metrics that the vivoactive HR doesn’t track are the ones we never used. It seems Garmin has taken the features most often used in its more specialized watches and bundled them in the vivoactive HR. After a few weeks of testing the only features we occasionally missed (when compared to Garmin’s top-of-the-line fenix 3 HR) were the ability to track open water swimming, and the bread crumb overhead trail view while tracking a hike. That was it.

For the price ($250), the vivoactive HR offers a feature set that is unrivaled. Nothing from Fitbit, Polar, or Apple comes close to delivering the activity tracking, customizations, and smart notifications in a watch that is both waterproof and runs for over a week on one charge. The only watch that gives the vivoactive HR any real competition is Garmin’s own fenix 3 series watches and they cost more than twice as much.

Garmin has a long history of sticking with hardware while offering software updates free of charge. In fact, the software updates that come with the vivoactive HR were also made available to owners of the original vivoactive. This often means that when Garmin updates the software on one of their watches, owners of the old version get to update their watches. It’s like getting a new watch without having to buy one.

Absolutely. If all around fitness tracking with smart notifications is on your list and you don’t need deep running metrics, open water swim tracking, or triathlon timing, then this is your watch. No doubt. If, however, you need absolutely everything a GPS fitness watch can deliver, then leave the vivoactive HR for the amateurs and step up to the Garmin fenix 3 HR.