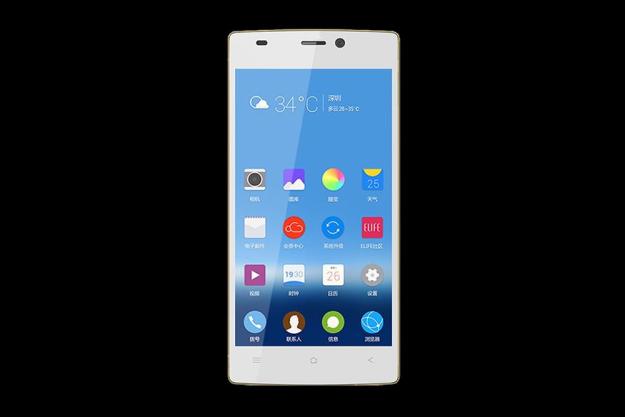 “Chinese manufacturer Gionee is here to dispel the myth that all smartphones designed and produced in China aren’t worth buying. It’s doing so with the elife S5.5, the current holder of the world’s thinnest smartphone title.”

For a claim to fame, “World’s thinnest smartphone” isn’t a bad one. The record is currently held by Gionee, a name with which many will be unfamiliar, but the Chinese company is currently making a big push into the world’s emerging smartphone markets. The phone is the Elife S5.5, and it measures a mere 5.5mm thick. As a comparison, the iPhone 5S is 7.6mm thick, and even the super thin iPod Touch is a comparably porky 6.1mm.

We had some brief hands-on time with the S5.5 during Mobile World Congress, but have been lucky enough to spend some more time with the device since then. It has been interesting, not just because of the phone’s slim size, but also because it uses a heavily modified version of Android. How does a smartphone not specifically aimed at the U.S. market stack up against the devices we’re more used to handling? Let’s find out.

Thinner than a supermodel on a diet

Guess what? The S5.5 is really, really thin. Stack the normally slim iPhone 5 on top of the Gionee phone, and Apple’s device looks overweight. Pop it on top of the new LG G3, and the difference is even more noticeable. It’s questionable whether the slim chassis makes the S5.5 more attractive, but there’s no denying the level of engineering that has gone into its creation.

Stack the normally slim iPhone 5 on top of the Gionee phone, and Apple’s device looks overweight.

The rear of the phone is covered in a 0.4mm thick piece of Gorilla Glass, while the front gets a 0.55mm thick piece, and they’re clamped together by a magnesium alloy chassis. On the rear, the camera lens extends out by a millimeter or so, but rather than detracting from the design, it gives it a little character. Overall, the phone is very attractive. The glass and metal construction achieves a premium feel that other Android makers seem unable to match, while the minimalist, unfussy body is unquestionably modern.

However, despite some curving on the edges, the phone can feel sharp in the hand. Otherwise, the Elife S5.5 is solid as a rock, with absolutely no flex or creaks. Forget what you think you know about Chinese designed and produced smartphones, the Gionee Elife S5.5 is proof the stereotype doesn’t always apply.

Perhaps the least attractive aspect of the Elife S5.5 is the amount of bezel above and below the screen — each section is almost identical in size to the iPhone 5’s bezel, and although the edging isn’t that big, the white color scheme does accentuate its size. Below the display are three standard Android buttons, which disappear entirely when the backlight goes out, leading to some confusion about their placement.

If the look of the S5.5 is its high point, then the software is its lowest. Our test device ran Android 4.2.2, which is already a black mark, but Gionee has prodded and poked Android about to create Amigo 2.0, its own take on Google’s OS. On the positive side, it’s colorful, modern and good looking, with some fun gesture controls. However, it’s not all that fast, leaves a lot of space unused, and was sometimes frustratingly unresponsive. Gionee has also filled it with unfamiliar apps, and hidden Google’s apps out of the way.

Gionee’s app selection is a mixed bag. For example, the UC Browser is installed as standard, which is feature packed but annoyingly slow. In addition to the Gmail app, there’s an unknown email app for other accounts, and sadly Google’s newly released standard email app wasn’t compatible with the S5.5.

Moving on to the positives, the Amigo 2.0 UI relies on some intuitive gestures, such as a swipe down on the home screen to lock the device, and a swipe up to reveal the recent app list. Like Huawei, Gionee has abandoned Android’s app drawer and dumped all the icons across multiple screens. The notification drawer has been split into two, and requires a button tap to switch between messages and settings. Unlike other parts of the UI, this looks old and clunky. There’s nothing fundamentally wrong with Amigo 2.0, it just feels a little unrefined, and we yearned for stock Android after a while.

There were at least 25 non-standard apps pre-installed, ranging from a decent music app and a pointless cricket app, to a business card scanner and a selection of game demos. Messing around deleting these was a pain, and reorganization of apps we wanted to use was time consuming. The industry has been changing for the better in this regard, but the Gionee is still stuck in the past.

Gionee has chosen MediaTek’s MT6592 octa-core processor to power the S5.5, and given it 2GB of RAM to help out. For the most part it ran extremely well, and was very fast opening apps and running games. Trial Frontier ran beautifully, as did Hill Climb Racer, and sliding through the home screens — even with one of Amigo 2.0’s crazier transitions active — was smooth and effortless.

If the look of the S5.5 is its high point, then the software is its lowest.

Using a Geekbench 3 test, it achieved a single-core score of 444, and a multi-core rating of 2,443. The latter result puts it slightly higher than a Samsung Galaxy S4, and slightly below the Nexus 5. The former is less impressive, and rates alongside older hardware such as the LG Optimus G and the Galaxy S3. A Quadrant test returned an overall score of 15,135.

The S5.5 has a Super AMOLED touchscreen which measures 5-inches and has a 1080p resolution. As you would expect, it’s incredibly bright and colorful, and several people commented on how beautiful it looked.

There are two cameras on the S5.5, a 13-megapixel on the rear, and a 5-megapixel on the front. Snapping away with the rear camera immediately highlights the Gionee’s main issue: its software. Tap the shutter button, and after the phone takes the picture, there is a three second wait while it processes the image. We know, because there’s a big box telling us so, and we can’t do anything else until it’s done. No, three seconds isn’t very long, but it’s very annoying if we realize we can take a better picture, but then have to wait for the phone to sort itself out.

Despite its lethargy, the Gionee can take good pictures, with colors coming through well, and limited noise in low-light situations. However, it did produce some less than satisfactory results with the HDR mode switched on, and standard pictures could sometimes appear a little dim. With a few tweaks and some care taken with the software, the S5.5 will be a decent camera phone to have in your pocket, just don’t expect it to be a world beater at the moment.

Battery life doesn’t suffer too much

Stuffing a big battery into a phone only 5.5mm thick was always going to be impossible, so perhaps the 2,300mAh cell inside the Elife S5.5 is the best we could expect. For its size, its performance is quite impressive, and two days of average use was achievable. There’s also a power saving mode once the battery gets low, which gives it some extra standby time.

However, connecting a Pebble smartwatch and using the camera saw that time diminish by at least half, making a day’s use more realistic for the heavy user.

Tough to recommend, despite cool design

The main reason anyone will be eyeing up the Gionee elife S5.5 is because of its design and the super slim chassis. If that’s all you’re interested in, you’ll be satisfied. It’s good looking, well made, and is suitably different to most other Android devices.

However, you must have a forgiving soul if you’re going to use it everyday. The software isn’t up to the standards set by Sony, LG, or HTC and if you’ve used stock Android, you’re in for a shock. Gionee is promising an update to Android 4.4 KitKat in the near future, which may bring some changes to the UI, but we don’t know if they’ll be for better or worse.

Because the software is a let down, it makes the phone difficult to recommend even though we’re impressed with the hardware quality. It’s one for the dedicated smartphone fan who doesn’t mind some style over substance, but if Gionee can learn from it, then future devices could be really exciting.

Under the Gionee name, the S5.5 is sold in various countries around the world, but anyone keen to get their hands on one in the U.S. should take a look at the Blu Vivo IV, which is exactly the same phone in all but name.

Overwatch is ditching loot boxes ahead of sequel launch