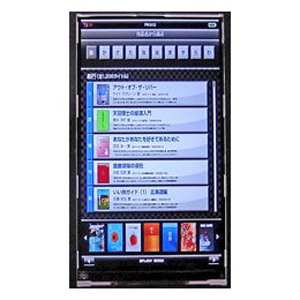 Hitachi announced today a new high-definition screen for smartphones that challenges Apple’s Retina display as the baddest screen in all the land, Engadget reports.

The new screen measures in at 4.5 inches, with a 1280 x 720 resolution, which gives it a clearer-than-crystal 329 pixel-per-inch density. It also boasts a 1,100:1 contrast ratio and a 500-nit brightness level emitted from an LED backlight.

The 3.5-inch Retina display on Apple’s iPhone 4, by contrast, has a native resolution of 960 x 640 pixels, which means a slightly lower ppi rating of 326. As Apple CEO Steve Jobs proclaimed at the iPhone 4 launch, the high resolution of the Retina gives it the look of high-quality print, rather than the pixilated nonsense we’d all grown used to until the iPhone 4’s release.

Like the Retina, Hitachi’s new screen uses an in-plane switching (IPS) LCD panel that allows for improved colors and a wider viewing angles — about 160 degrees from any direction.

Higher resolution screens are, of course, better. And we’re excited to see a new generation of smartphones that utilizes Hitachi’s (and other’s, presumably) technology.

That said, there’s a limit to how high resolution goes before it becomes meaningless. In fact, the iPhone’s display is already about as high-resolution as the human eye can decipher. So the minor increase in resolution in the Hitachi display is not only negligible, it’s literally imperceptible.

What is significant, however, is how the greater availability of these high-resolution displays will change the smartphone game: The more phones that are offered with displays like this, the harder it will be for companies to sell phones with lower-res screens.

The same goes for the burgeoning tablet industry. From what we’ve heard so far, the iPad 2 will not have Retina display. But it’s not hard to imagine that some company, somewhere, will begin offering tablets with Retina- (or Hitachi-) level resolutions.

That sounds good to us.

Topics
Video-editing app LumaFusion to get a Galaxy Tab S8 launch
OnePlus wants to tempt you back to Android tablets with the OnePlus Pad
Samsung Galaxy S23 vs. iPhone 14: Apple’s grip is starting to slip
I love (and hate) this stunning iPhone 15 Ultra concept
Apple hints at cunning plan to make you spend even more on an iPhone
Strap a Samsung Galaxy Watch 5 Pro on your wrist while it’s $50 off
There’s a huge sale on Kindle e-readers happening today
Going to pre-order the Galaxy S23? Don’t miss these deals
Best Google Pixel Deals: Pixel 7, Pixel Watch, and Pixel Buds
Does the OnePlus 11 have an alert slider? Read this before buying
OnePlus 11 price: how much does the phone cost?
Best Fitbit deals: Save on Fitbit Versa 4 and Fitbit Charge 5
Does the OnePlus 11 have wireless charging? What you need to know