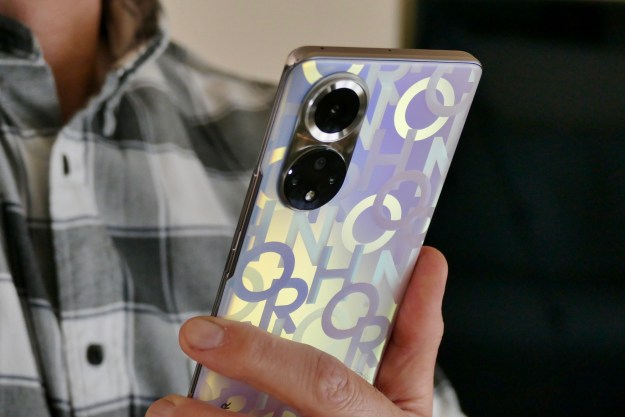 “The Honor 50 represents the newly independent brand's return to Android phones with Google Mobile Services onboard. While that's big, the rest of the phone doesn't feel especially fresh, despite the mad color scheme and finish.”

Comebacks are surprisingly common in mobile tech, with Nokia, BlackBerry, and even Palm all returning after a period away — to varying degrees of success. Honor, once owned by Huawei, is the latest established name to come back. It technically didn’t leave, though, as it was just sold off by Huawei for a chance to thrive on its own.

Since then, Honor has struck deals with Google, Qualcomm, and several other companies that currently cannot work with Huawei. This means that not only is Honor back, it now has Google Mobile Services. The Honor 50 is its first smartphone to come with Google Play and all other expected apps and services, so this seems like a new start. On the other hand, Honor could still be trying to understand its own identity after spending so long coupled up.

The version of the Honor 50 you’re looking at in our photos is the “Code” special edition, and it’s everything I want to see from an Honor phone. The company has often included striking reflective rear panel designs, and this is probably its brightest and most eye-catching yet. The H, O, N, and R letters give the design depth and sparkle in different shades of silver and blue, depending on the angle and the lighting. I think it looks excellent, but if it’s not for you, the phone also comes in black, green, or a slightly more subtle, sparkly tone called Frost Crystal.

It’s thin at just under 8mm and very light at 175 grams. This, along with the curved screen and modest 74mm width, makes it very easy to hold and use with one hand. The curve is quite dramatic and is a little sharp when you grip the phone tightly. Build quality is excellent, with the glass screen and rear panel fitting flush with the metal chassis. The stadium shaped, dual-level camera housing, which has twin circular modules on the back, really fits in with the Code’s reflective letter O design as well.

Yes, the Honor 50 comes with Google Mobile Services onboard

One other thing is that, for Honor’s talk of the phone representing its “Independence Day” and its definite split from Huawei, the similarity in design and specification between the Honor 50 and the new Huawei Nova 9 is striking. It won’t do much to convince anyone the two are firmly and finally divorced.

A 108-megapixel main camera leads the show on the Honor 50, and it’s joined by an 8MP wide-angle camera and a pair of 2MP macro and depth cameras. The selfie camera has 32 megapixels and a 90-degree viewing angle. Honor is pushing the camera system as one for aspiring vloggers and has included several different video modes that utilize all the cameras at the same time.

First, let’s talk about stills. The 108MP camera is very light-sensitive. In a variety of situations, it will under or overexpose photos, and the wide-angle camera is even worse. On a brighter, sunnier day, the photos are better, but some will dislike the way it oversaturates blue skies. I don’t mind; it certainly makes the photos pop, and I prefer that to the depressing tone of the photos taken when the sun wasn’t shining.

Look closely, though, and the photos can lack detail — there’s evidence of excessive processing, too. On a more positive note, I like the choices of Portrait and Aperture modes, which add a bokeh effect to either people or objects. Plus, the edge recognition is solid.

The multi-camera video modes shoot with two cameras at the same time, so you can create video combinations with the main rear camera and the selfie camera, including simultaneous recording, a picture-in-picture window, and other combinations. It’s a gimmick, but it does work. Although, the interface is a bit cumbersome and slow, so you’ll need some patience to master the controls.

It’s not something I would personally use outside of the review, but it certainly would be fun in large groups when you want to capture everything that’s going on around you. There’s also a very easy-to-use editing suite, which makes creating a final clip completely on your phone simple. The Honor 50 supports Bluetooth headsets in the video mode, so you can use those to record sound rather than the internal microphone — which should result in better audio, especially when shooting at a distance. Oddly, the Honor 50 only records video in 16:9 or 21:9, but it does support 4K at 30 frames per second (fps).

The Honor 50’s still camera hasn’t inspired me much

There’s fun to be had with the Honor 50’s video camera, but only if you’re dabbling in the world of vlogging. Anyone more ambitious or experienced will quickly want more, as it only records in 1080p at 30fps in multi-cam mode. I’m not sure it’ll get used very often by the average person shooting video, though. The Honor 50’s still camera hasn’t inspired me much, but software refinement may improve its ability over time.

Yes, the Honor 50 comes with Google Mobile Services onboard. This means it has the Google Play Store, Gmail, Google Maps, Messages, and all the other expected apps. Plus, you sign into your Google account during setup so you can use Google’s cloud services. Using the Honor phone is exactly the same as using any other Android smartphone when it comes to Google integration.

Honor’s own MagicUI 4.2 is installed over Android 11. Regarding design and layout, it hasn’t changed much compared to MagicUI 3.1, which was installed on the Honor 30 — this just has added Google-ness. There are other hints to Honor’s past, with the always-on screen sharing the same customization as the feature on Huawei phones, right down to some of the same icons and animations. That said, the always-on screen is one of my favorite parts of MagicUI, as it’s easy to personalize it, and information is clearly shown on the lock screen.

I haven’t experienced any reliability or app problems with the Honor 50, and notifications have come through without an issue. It has been a steady partner during my time with the phone.

The Honor 50’s screen is exactly what we want from a mid-range phone today: it’s an AMOLED panel with a switchable 60Hz or 120Hz refresh rate; has a 2340 x 1080-pixel resolution and 300Hz touch sampling; and it’s colorful, dynamic, and responsive.

It even manages to compare very favorably with the latest Google Pixel 6 Pro, showing the same eye-popping colors with a slightly warmer tone — at least with the Vivid setting active. It’s also possible to tweak the screen’s temperature or select a mode with sRGB or DC-P3 color maps if it’s not to your liking. Jo Yuri’s Glassy video jumps off the screen, but the phone loses points for its single speaker on the bottom of the phone.

Honor has fitted the Qualcomm Snapdragon 778G processor with a 5G modem, and my review model has 6GB of RAM. It’s a fast performer, but the operating system never feels snappy, and I have found it can stumble when closing games and other power-intensive apps. This is possibly a software optimization issue rather than a lack of processing guts. Honor’s own GPU Turbo X tweaks make it great for gaming, and I’ve enjoyed Asphalt 9: Legends a lot, particularly because the phone is light to hold and the screen is lovely. It’s a shame it doesn’t have stereo speakers to really close out its media ability.

I was a little worried the 4,300mAh battery wouldn’t be powerful enough to last longer than a day, but the Snapdragon 778G and MagicUI must be fairly conservative with energy. With normal use, I could switch the phone off overnight and it’d have enough juice to last the next day. This was especially impressive, as I use the phone with the 120Hz refresh rate active all the time.

The 66W SuperCharge fast charging is established Honor technology and very welcome. It zapped the battery to 70% in 22 minutes, which is more than enough for a single day’s use. Unfortunately, there’s no wireless charging — a feature I’d consider standard on most mid-to-upper range phones today.

The Honor 50 embodies the phrase “everything old is new again,” as despite Honor’s new beginning as an independent brand, the Honor 50 feels very familiar. The phone’s shape is basically the same as the Honor 30 Pro, just with a different camera model design. MagicUI 4.2 is the same as older versions of the software, except with Google added. Even the 66W SuperCharge feature is a carry-over from its Huawei days.

Don’t take these as a negative; the fast charging is excellent, the software is reliable, and the design is modern and fun. But it does feel a little like business as usual for Honor, and I wanted to see something totally brand-new from the company. Maybe this will come later, and if so, the Honor 50 serves a great re-introduction to how the brand delivers competent, pretty, but not always outstanding smartphones.

This lack of true newness presents one problem, though: during the time Honor has been away, the mobile market has changed, and there are a lot more phones around the same price as the Honor 50 that provide better value and ability. Yes, Google is back onboard, but that just puts the Honor 50 on the same level as many other phones again. While it’s good news for Honor as a brand, it doesn’t set the phone apart from the rest.

Yes; take a look at either the OnePlus Nord 2 5G or the Samsung Galaxy A52 5G. Both are slightly cheaper than the Honor 50, but you don’t sacrifice anything in terms of functionality or performance. If you’re outside the U.S., the Realme GT or GT Neo2 should also be considered. The $449 Google Pixel 5a is worth investigating if you want a great camera, and at $599, the new Google Pixel 6 also challenges the Honor 50.

If you’re not set on an Android phone, take a look at the $699 Apple iPhone 13 Mini. As an Android alternative in the same price range, the OnePlus 9 combines a great screen, fast charging, an improved camera, and great software into a pretty design.

We are checking in with Honor about its software update commitment. To be competitive, it needs to deliver at least two years of major version updates and three years of security updates. The Honor 50 does not have water resistance and isn’t a rugged phone, so there is a risk of damaging it if you’re unlucky.

There is something else to consider, and that’s the talk of Honor finding its way on to the U.S.’s Entity List, which would prohibit Google, Qualcomm, and others from working with it. This is the affliction Huawei sought to overcome by selling Honor, and while it’s only a vague threat at the moment and may not affect the Honor 50 directly, it’s an unknown that may hurt the brand’s plan for wide global reintroduction.

No. While the Honor 50 is perfectly acceptable, it doesn’t set itself apart from the competition with a noteworthy feature and is missing some essentials that can be found on other phones for a similar price.