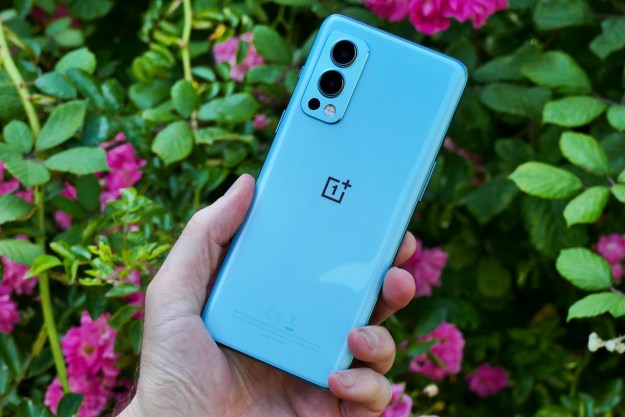 “The OnePlus Nord 2 has everything we like about OnePlus phones, from fast charging to a great screen and that handy Alert Slider, for an affordable price. Plus, it looks stunning in the Blue Haze color.”

The OnePlus Nord 2 is a particularly important new smartphone because it’s the first time OnePlus has released a phone without a Qualcomm Snapdragon chip inside. The Nord 2 uses a customized version of MediaTek’s Dimensity 1200 flagship chip, and it’s arguably the company’s highest-profile partnership yet, at least outside of Asia. While OnePlus will obviously be looking for success, MediaTek will also be watching closely.

Furthermore, it’s a big moment for the Nord range. The original Nord managed to return OnePlus to its value-based roots but lacked identity. OnePlus has given the Nord 2 identity, but oddly, by doing so, it has accidentally created another OnePlus 9 phone, leaving me questioning what the Nord range is all about.

There’s plenty riding on the Nord 2, then, so what’s it like? I’ve spent four days with the phone, which is enough time for a detailed preliminary assessment but not quite enough for a final, in-depth review. I’ll return to this review after more time with the Nord 2, and therefore the score given at this time may change depending on how the phone continues to perform.

Let’s talk about the color of our review model. It’s called Blue Haze, and it’s utterly stunning. OnePlus usually gets its colors right, but this is perhaps its best yet. The aquamarine hue has a glossy finish but doesn’t attract fingerprints at all, and smudges are very effectively disguised by the Gorilla Glass 5 panel. It stays looking clean and sharp.

The camera module uses the same shade but reflects light differently due to it not being made from glass, and it adds a lot of character to the back of the Nord 2. The glass even manages to hide the ugly legal text that has to be stamped on the back. I think the Nord 2 looks fantastic, and I like how it fits in with the OnePlus 9 and 9 Pro’s design, making it feel like part of the family.

Another crucial family mark is the Alert Slider on the side of the Nord 2, which lets you quickly switch between Silent, Vibrate, and Ring modes. It’s fast and convenient, and it’s a feature that separates OnePlus from other brands. The presence of the slider and the pretty design makes it look and operate like a true OnePlus phone, something I felt the OnePlus Nord CE did not do.

The construction — a fiberglass frame with a “metalized” finish — and size is basically the same as the first OnePlus Nord, with a 73mm width and 8.2mm thickness making the phone easy to handle and use with one hand. It feels solid and substantial, and the modest 189-gram weight ensures its pocketable without being annoying.

There’s no water-resistance rating, but I’ll vouch for the Nord 2’s durability. It’s quite slippery, and on the first day using it, the phone slipped out of my pocket and crashed down onto paving slabs. It survived with only the slightest mark in the top-right corner of the chassis. The glass rear and the screen are fine. I may have gotten lucky, so a case is advisable if you have a tendency to drop slippery phones.

I found the first Nord to be a little faceless, but OnePlus has changed that for the Nord 2, effectively turning it into a OnePlus 9 Lite. That’s not a bad thing, and really, it’s the name that would suit the Nord 2 better. Leaving the Nord name to cheaper models like the Nord CE, which lack crucial OnePlus elements, may be a better strategy.

Confused branding aside, the Nord 2 is well-proportioned, well-made, and — provided you get one in Blue Haze — an absolute beauty, too.

It’s a 6.43-inch, 20:9 aspect ratio, fluid AMOLED screen on the Nord 2, complete with a 90Hz refresh rate and a 2400 x 1080 resolution. It doesn’t seem to have HDR10+ certification like the Nord, but it does have two artificial intelligence (A.I.) modes called AI Color Boost and AI Resolution Boost. However, these only work with certain apps. Both cooperate with YouTube, but AI Color Boost otherwise only works with MX Player Pro and VLC, while AI Resolution Boost works with Snapchat and Instagram.

The Nord 2’s screen is lovely, and its similarity to the 9 Pro makes the phone highly desirable.

The screen is brighter and more vibrant than the screen on the Nord CE, and when watching video, there’s surprisingly little to split between it and the OnePlus 9 Pro. The AI Color Boost does amp up the saturation, taking it beyond the 9 Pro. Turn it off, and it’s not quite as eye-catching. The AI Resolution Boost is less noticeable since so much YouTube content is available above 1080p already.

When not watching video, the Nord 2’s screen isn’t as bright as I’d like but still legible outdoors in sunlight. This aside, the Nord 2’s screen is lovely, and its similarity to the 9 Pro makes the phone highly desirable. Audio comes from stereo speakers that are astonishingly loud but not very refined. I had no wish, and actually no need, to take it over about 40% volume.

OnePlus’s Oxygen OS user interface, version 11.3, is installed and based on Android 11. It’s the same as the OnePlus 9 Pro for the most part, but there are some odd differences in the settings. For example, on the OnePlus 9 Pro, you can change the ambient display, icons, and font in the Customization menu, while on the Nord 2, you do it under the Personalization menu. Performance is great so far, with smooth scrolling through apps and menus.

My review phone has received one software update since I started using it, and I’m still in the process of assessing the software and its everyday reliability.

The Nord CE’s camera was inconsistent, and the first Nord’s camera suffered from poor performance. The Nord 2’s camera improves the specification over both with a 50-megapixel main camera with optical image stabilization (OIS) and an 8MP wide-angle camera with electronic image stabilization (EIS). A 2MP monochrome camera completes the rear setup, along with a 32MP selfie camera also with EIS.

I’ve only taken about 100 photos with the Nord 2 so far, so deeper insight is still to come. However, at this stage, it’s obvious the Nord 2 is an improvement over the Nord and the Nord CE, but because OnePlus always takes a little while to really refine the performance of its cameras, there are still a few problems, but updates are likely to arrive to address them.

The Nord 2’s focus, color management, and dynamic range are mostly very good. Sunny day shots outside can introduce a little oversaturation, while edge enhancement and processing can be harsh and noticeable. There are differences in exposure between the main and wide-angle cameras, but it’s not drastic. OnePlus annoyingly adds quick access in the camera app to a 2x and 5x zoom, but these are digital zoom modes, and quality really suffers. It’s worth noting the selfie camera, as it has a lovely natural tone with plenty of detail.

So far, the Nord’s camera has taken some great shots that are highly shareable without any editing, but it has also disappointed with its aggressive processing. The camera performance has not been factored into the score yet. It’s also worth remembering that the camera has not been worked on by Hasselblad, unlike the OnePlus 9 and OnePlus 9 Pro.

The MediaTek Dimensity 1200 that OnePlus uses for the Nord 2 is the first to come out of MediaTek’s Dimensity Open Resource Architecture (adorably known as DORA) initiative, which lets the phone maker tweak the chip to better work with the hardware. There’s a choice of 6GB, 8GB, or 12GB RAM and 128GB or 256GB storage space. My review phone is the 12GB/256GB version.

During the time I’ve been using the Nord 2, a software update has improved the performance and reliability of the phone, which was a little shaky at first. Nothing terrible — notification support was hit-or-miss, and some apps were slow — but the issues seem to have been solved now. I’ve played Asphalt 9: Legends and haven’t noticed any slowdown or problems that affect gameplay. It does get a little warm to the touch after about an hour, though.

I’ve not put the Dimensity 1200 through its paces yet, but for everyday tasks, it hasn’t made itself known at all. This may sound like a downside, but it’s not. Good processors just do their job, and we shouldn’t notice them much at all. You quickly know if a phone has a badly configured chip. It’s looking positive for the Dimensity 1200 at this stage.

It does get a little warm to the touch after about an hour, though.

The battery life so far suggests two days of moderate use will be possible, but if you play a game, watch video, and make video calls, then it’ll likely be down to 30% by the end of the first day. OnePlus’s super-fast Warp Charge 65T charger takes the 4,500mAh cell from flat back to 100% in less than half an hour. This is the same system used on the OnePlus 9 Pro and a step up from the Warp Charge 30T used on the Nord CE.

I haven’t tested the 5G connection yet, but it’s good to see both slots in the dual-SIM carrier support it. The fingerprint sensor under the screen is fast and reliable, but it’s not as instantaneous as the OnePlus 9 Pro’s sensor. There’s face unlock, too, and it’s very quick to respond.

The OnePlus Nord 2 will launch on July 29 in the U.K., Europe, and India. There’s no indication of a U.S. launch at this time. It will cost 399 British pounds and be sold through OnePlus’s own online store, Amazon, John Lewis retail stores, and the Three and O2 networks.

The OnePlus Nord 2 is either at the top of the Nord range or the bottom of the OnePlus 9 range, which isn’t a bad position to be in. It takes a lot of what I like about the OnePlus 9 models — pretty design, great screen, good performance and software, very fast charging, and the Alert Slider — then charges less for it.

It’s a great start. I still need to use the camera more, assess the battery life, try out the MediaTek-powered 5G connection, and use the phone for longer before giving a final verdict, but at the moment, the Nord 2 has impressed. I can’t help but think OnePlus would sell more if it was called the OnePlus 9 Lite, though.

For a smartphone around the $500 or 400 British pound price, we recommend the Samsung Galaxy A52 5G. It has some advantages over the Nord 2 with water resistance, two-day battery life, a microSD card slot, and a 3.5mm headphone jack. It’s similarly powerful and has a great 120Hz refresh rate screen.

Alternatively, the Apple iPhone SE (2020) and Google Pixel 4a both cost around the same price and offer something different. The iPhone SE is much smaller but still provides a great iOS experience, while the Pixel 4a has a superb camera.

At the moment, the OnePlus Nord 2 5G can’t quite beat the Samsung Galaxy A52 5G, but that may change once I’ve used the phone for longer. The score given to the phone at the moment is not final and may change. Look out for a review update very soon.