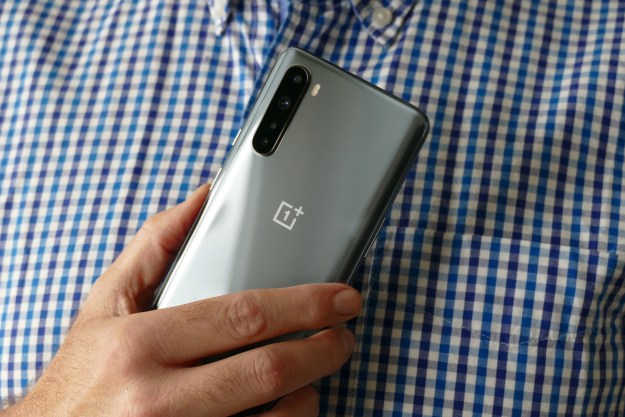 “The OnePlus Nord has the right features and tech to make the phone last, all at a value-driven price.”

OnePlus has always offered incredible value, but it has lost its way over the past year as prices crept up on its most desirable devices. Today’s OnePlus 8 and OnePlus 8 Pro are solid phones, but they’re equivalent in price to competitors.

The company’s latest release, the OnePlus Nord, feels like a return to the company’s roots. It’s a strong midrange phone that looks attractive and packs some high-end features. That’s the kind of value we want to see, but does it make the Nord a worthy purchase?

It’s a good thing there’s a big OnePlus logo on the back of the Nord, as the phone shares a similar design to several other smartphones, from the Huawei P30 Pro to the Xiaomi Mi 9.

In other words, the Nord isn’t instantly recognizable. It’s a tried-and-tested look, but far from unique. The Grey Onyx version in the accompanying photos is understated but attractive, while the Emerald Blue model is a real eye-catcher.

Gorilla Glass covers both the front and rear, with a plastic frame between the two. It doesn’t look or feel like plastic, however, and its use contributes to the low 184 gram weight. You shouldn’t worry that the plastic frame will feel cheap, but the phone’s metal buttons lack the positive, premium action of those on the metal-and-glass OnePlus 8.

OnePlus has included its trademark notification alert slider, where you can quickly change the mode from silent to ring or vibrate. The machined texture makes it easy to use. All the buttons are well-located, provided you use the phone with your right hand. The phone’s 73mm width and 8.2mm thickness mean it’s easy to grip and hold. It’s about the same size as a Samsung Galaxy S20 Plus.

The phone doesn’t have a “wow, that’s a OnePlus Nord” design, but the ergonomics are spot-on, and it looks and arguably feels like phones that cost a lot more. It’s only when you pick up the Nord and a phone like the Galaxy S20 or OnePlus 8 that the differences become apparent — mostly in terms of added weight, and the chiseled-from-slate feel that comes with a metal chassis.

Gorilla Glass 5 covers a 6.44-inch Fluid AMOLED display with a 90Hz refresh rate, 2400 x 1080 pixel resolution, and 20:9 aspect ratio screen with HRD10+ support. That’s an excellent screen for a phone at this price. It’s a flat screen, which will please as many people as it upsets, but it does make the phone less likely to slip out of your hand. Some will consider it better for games, too.

Turning to Carfection’s McLaren 600LT Spider review video on YouTube, the Nord’s screen struggles to show detail in some of the darker areas, but has a lovely color palette on the default Vivid screen setting. If you want to dig into the settings, you can activate the sRGB and Display P3 options, though the differences are minimal.

Sound is played through a single, downward-facing speaker. It’s loud without becoming distorted, and while bass is obviously lacking, it’s tuned nicely and never becomes harsh. There’s no 3.5mm headphone jack, but like other OnePlus phones, the Nord supports both AptX and AptX HD. Provided you have a pair of compatible headphones, you can listen to high-resolution audio through the Nord’s Bluetooth connection.

Bluetooth music played through Spotify to a pair of Bowers & Wilkins PX headphones has plenty of volume and depth. The Nord’s overall multimedia experience, when you take the price into consideration, is excellent.

The main camera is a Sony IMX586 with 48-megapixels and an f/1.75 aperture, plus optical and electronic image stabilization. Alongside it is an 8-megapixel ultra-wide camera, a 5-megapixel depth sensor, and a 2-megapixel macro sensor. It’s what you find on the OnePlus 8. On the front is a dual-lens selfie camera made up of a 32-megapixel main sensor and an 8-megapixel wide-angle sensor.

Despite being similar to the OnePlus 8, the Nord’s camera isn’t as good. It underexposes shots frequently, and can’t use HDR as effectively, resulting in a loss of detail in difficult lighting conditions using both the wide-angle and standard lens. The macro lens is of low quality and rarely focuses well, making it mostly useless. Nightscape doesn’t do much better, and often introduces noise, or produces a drab photo.

I felt the need to edit almost all the photos taken with the Nord before sharing them, as they just didn’t “pop” in the way I wanted. Overcast skies became oppressive and unnatural, and sunny day photos lacked dynamic range. I like the new filters created by photographer Hannes Becker, though.

Portrait mode selfies have a strong, rather unnatural bokeh effect with only average edge detection, a problem that continues when using portrait mode on the rear camera.

OnePlus demonstrated considerable improvement with the OnePlus 8 Pro’s camera, but has taken a step back with the Nord’s. It’s by no means terrible, but it’s not as good as I expect. There are better cameras on other phones, even at this price.

Qualcomm’s Snapdragon 765G processor with either 8GB/128GB or 12GB/256GB of RAM and storage space comes inside the OnePlus Nord. I have been reviewing the 12GB version. It also has 5G support, if you live in an area where the service is available. Here are some benchmark test results:

It’s the same chip found inside the LG Velvet and the Motorola Moto Edge. The Nord beats them both on the gaming-focused 3DMark test, but is broadly similar on Geekbench 5. Performance is good. There is some slight hesitation when switching between apps or from fullscreen video back to normal, but not to the point where the phone feels slow. It is also likely to be software-related, and cured in a future update. However, this does make me wonder if the 8GB/128GB model may feel a little underpowered.

Playing Real Racing 3, Sky Wings, and Dariusburst didn’t reveal any problems with performance, as you’d expect from the games-focused G version of the Snapdragon 765, and the phone didn’t get hot even after extended sessions. There’s OnePlus’ Fnatic game mode onboard, which minimizes distractions and optimizes the processor.

OnePlus’ OxygenOS is one of the best versions of Android available. It’s fast, smooth, and not packed out with pointless features or stylistic flourishes. It does the job it’s made for, and I didn’t have any problems with reliability.

I still like Zen Mode, which gives you a time-out for 20 minutes by muting calls and notifications, and restricting app access. The slide-in Google News and Assistant panel is helpful, there are some pretty animated wallpapers, gesture control works faultlessly, and it does look and feel silky smooth. OnePlus says it has worked on OxygenOS’s fluidity, and it shows.

The 4,415mAh battery lasts about two days before needing a recharge, based on about three hours of daily screen time, when mostly connected to Wi-Fi.

There’s some interesting tech working behind the scenes inside the Nord, helping to protect the life span of the battery by intelligently charging it in stages overnight. It charges to around 80%, then waits until before the time you usually get up to add the final amount of charge. This avoids any problems with keeping the battery fully charged for long periods, which may reduce long-term capacity.

It comes with Warp Charge 30T, which is OnePlus’s proprietary fast charging. It’s wired only on the Nord, and goes from zero to 70% in 30 minutes, and then on to full in a little over an hour. The phone is secured using an in-display fingerprint sensor that worked very reliably. Speed was such that I could happily use it without resorting to face unlock.

I’ve had some Wi-Fi problems with my OnePlus Nord. I found the connection would sometimes hang and not switch to cellular, with the problem only resolved by turning the Wi-Fi on and off again. The range seems to be shorter than many other phones too. I have reported the issue to OnePlus and am submitting bug reports when the issue arises, something it thankfully does rarely. Calls have been fine. I do not have 5G in my local area, so have been unable to test performance.

A few days before the review embargo was up, OnePlus delivered a software update to the Nord that may help cure the Wi-Fi connectivity issues, and improve the camera too. I’ll update this review should anything change.

The OnePlus Nord costs 379 British pounds, which converts over to about $480 U.S., if you buy the 8GB/128GB model. The 12GB/256GB version I’ve reviewed here costs 469 British pounds, or about $593. The Nord is not officially for sale in the U.S. It’ll be available through OnePlus’ online store on August 4, in addition to John Lewis retail stores, Amazon, and the Three network.

OnePlus does not intend to sell the Nord in the U.S., outside of a promised but very limited beta program, but does say it will make a U.S.-focused, reasonably priced phone in the future.

OnePlus has increased the value of the Nord the old-fashioned way, increasing the phone’s longevity and concentrating on what matters on a day-to-day basis, rather than with attention-grabbing gimmicks. You’ll get reliable software, a great screen, long battery life, fast charging, 5G, and software updates for a few years.

These are core features that cheap phones often shun in favor of headline-grabbing camera specs that can disappoint in the real world and a fancy design. These aren’t great reasons to buy a phone at this price, but the OnePlus Nord gets the value just right.

The under-$500, or under 500 British pounds, smartphone space is quite crowded. The $400 Google Pixel 3a has been discontinued with no replacement yet, but it’s still a good buy if you can find one, or you can buy the cute $400 Apple iPhone SE 2020. It’s cute because it’s small, but the build and materials are superior to the Nord’s, and iOS is superbly designed and easy to use. It’s also worth looking at the $500 Poco F2 Pro, or the $400 Samsung Galaxy A51.

These phones are in tight competition, so it’s hard to broadly recommend any of them for every buyer. The Nord is the best pick if you care most about performance and display quality, and don’t care much about photography.

You’ll pay a little more for the $600 LG Velvet and the $500 Moto Edge, but both are good phones with more attractive designs and better cameras. If you can stretch the budget a little more, then do consider the $700 OnePlus 8, which has a classier design and a better camera, or a $700 iPhone 11 with its great software, camera, and performance.

While the OnePlus 8 Pro was given an IP rating, don’t expect one on the Nord. The phone is not water resistant, but will be fine for using in the rain. The body is made from glass and may break if you drop it, so it’s best to use a case. OnePlus has a range of cases for the Nord, some with its signature “sandpaper” finish for extra grip.

OnePlus promises two years of Android updates and three years of security updates. This is an excellent commitment, and one that increases the Nord’s long-term prospects, especially with 5G on board. Combine this with the battery-saving technology, and the Nord will last you for several years, and that’s superb for such a reasonably priced phone.

Yes. The Nord is a budget phone you can buy without worrying that it’ll need to be replaced next year.