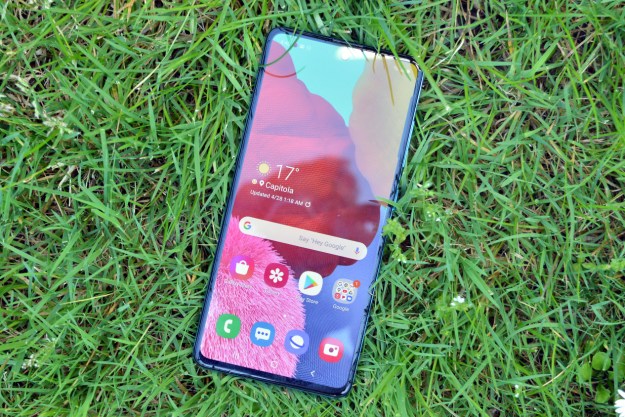 Samsung Galaxy A51 review: All about the display
MSRP $400.00
Score Details

“Samsung's Galaxy A51 has the best display at this price.”

Flagship phones are getting more expensive. While there was once a time when you could get the best of the best for $600 to $700, these days you’ll have to shell out at least $900. The result? Midrange phones have to get better too — and that’s where the Samsung Galaxy A51 comes in to contend for the best Android phones out.

The device is a follow-up to last year’s Samsung Galaxy A50. It offers a modern design and a few high-end features, while sacrificing things like top performance and a few camera features. But at $400, the phone has a lot of competition. And it’s some serious competition — like the new iPhone SE, which many consider to currently be the best phone under $400.

Is the Samsung Galaxy A51 one of the best cheap phones available? Let’s take a closer look.

The Galaxy A series has long been about offering premium features in an under-powered and inexpensive package — and those premium features usually include a modern design. That remains true here, and that’s one of the main ways in which the phone is better than the iPhone SE, which shares an aging design with the iPhone 8.

On the front of the phone, you’ll get an edge-to-edge display, with a hole-punch cutout in the middle for the front-facing camera. The modern design trends continue to the back, with the rectangular camera bump on the top left — similar to that of the Galaxy S20 series. The camera bump doesn’t protrude much from the back of the phone at all, which helps ensure that it doesn’t wobble too much on the desk. It’s a nice touch, and I hope manufacturers continue to move more toward flush cameras again.

On the left side there’s the SIM tray, while on the right, there’s a power button and volume rocker. On the bottom, there’s a USB-C port, and yes, a headphone jack — making this an enticing option for the audiophile out there.

The edge-to-edge display helps ensure that the phone feels comfortable in the hand and is easy to pocket. While there’s a fairly large 6.5-inch display here — 6.24 x 2.90 x 0.31 inches — most people won’t find it too big for day-to-day use. Sure, it’s bigger than the iPhone SE, but at the same time, the iPhone SE is equipped with only a 4.7-inch display. It’s also bigger than the Google Pixel 3a — but again, the Pixel 3a retains a dated design with a large forehead and chin.

Sure, it’s not as premium as the $1,000+ Galaxy S20 series, and the back of this phone is plastic instead of glass, but it shares many of the same design elements, and despite the plastic, it doesn’t necessarily feel cheap. It comes in a few colors, including silver, black, and blue, and while they all look fine, I particularly like the colorful blue model.

As mentioned, the display on the Samsung Galaxy A51 is 6.5 inches, and the quality of it is better than average for a phone in this price range. There’s more than enough display here for most, and only the most avid pixel peepers will have a problem with it.

The resolution on the display is 1,080 x 2,400, but perhaps more importantly, it’s an AMOLED display — which makes for deep black levels and vivid colors. That puts the phone’s ahead of the iPhone SE, considering Apple’s reluctance to adopt OLED technology in anything but its most expensive and recent models. It also gives the device a leg up against the Moto G Stylus, which matches the resolution, but features LCD technology.

It’s nice to see better display tech bleeding into cheaper phones. In the coming year or two, we should start seeing less expensive phones with 1,440p resolutions too — but in my experience, having an AMOLED display makes more of a difference than a higher resolution.

Under the display, there’s an optical fingerprint sensor. The sensor works fine, and recognized my print the majority of the time. It was a little slow, and that can get annoying, but it’s rarely a real annoyance.

The Galaxy A51 may have an overall design similar to that of more expensive phones, but performance is one of the trade-offs. And unfortunately, it’s a relatively major one here.

Under the hood, you’ll get a Samsung Exynos 9611 processor, coupled with either 4GB, 6GB, or 8GB of RAM, depending on the model you go for. I’m reviewing the 4GB model.

It’s a bit of a bummer that Samsung didn’t include a more powerful chipset. While the Exynos 9611 is marketed as a new chip, it’s really just a recycled Exynos 9610 that enables the 48-megapixel main camera sensor. The Exynos 9610 was featured in last year’s Galaxy A50, and at the time it was already a little under-powered. In a world with the A13-equipped iPhone SE, and even the Snapdragon 670-equipped Google Pixel 3a, the Galaxy A51 is downright slow.

That translates to day-to-day use. The phone often skipped a beat or two when performing basic tasks, and animations weren’t as smooth as they could have been as a result. Mobile gaming offered similar results, with dropped frames and slow load times on a regular basis.

It’s unfortunate for Samsung that Apple launched the iPhone SE, which absolutely dominates against the Galaxy A51 in benchmarks and daily use. The fact is that users are beginning to expect better performance from lower-end phones, and the Galaxy A51 doesn’t deliver.

Samsung’s One UI has been getting better over the years, and it’s leagues better than the old days of TouchWiz and Samsung Experience — but it’s still pretty far from stock Android. If you’re looking for a stock experience, then you’ll want to check out the Pixel 3a instead.

That said, One UI has its own aesthetic, and some like it. I personally prefer the cleaner look and feel of stock Android, but thankfully Samsung doesn’t stray too far into bloatware territory, like LG UX.

In this phone, you’ll get the second iteration of One UI, One UI 2.0, which is laid over Android 10. It looks fine and is easy to get used to if you’re coming from a different manufacturer.

As is the case with other Samsung phones, the Galaxy A51 probably won’t get speedy software updates. The flagship Galaxy S series is slow enough to get updates, and it’s a priority for Samsung. You’ll likely get an update or two on the A51, but don’t expect them to be timely. You’ll have to deal with Bixby on the Galaxy A51, as there’s no native way to remap the Bixby shortcut to another assistant.

Flagship phones are pushing the boundaries of what we thought we could get in a smartphone camera, thanks largely to machine learning and the use of multiple lenses. The Samsung Galaxy A51 jumps aboard the multiple lens train too, with a quad-lens camera. You’ll get a 48-megapixel main sensor, along with a 12-megapixel ultrawide sensor, a 5-megapixel macro sensor, and a 5-megapixel depth sensor.

Of course, the number of sensors and megapixels doesn’t ultimately dictate the quality of photos, but in the right situation, photos are pretty good. The phone does have some competition in the camera department.The iPhone SE takes advantage of Apple’s A13 processor for better image processing and ultimately good photos, while the Google Pixel 3a has the same quality of images that the Pixel series has become known for, which puts the Pixel series at the front of the camera-quality pack.

As for the A51, with the 48-megapixel main sensor, and in well-lit environments, photos look great. You’ll get a good amount of detail, and while photos aren’t as deep as those taken with the iPhone 11 Pro and Pixel 4, they’re still vivid. The ultra-wide lens here is a big deal too — it makes for much better landscape shots, and a generally more versatile camera experience.

Get rid of the good lighting, however, and you’re out of luck. The Galaxy A51 just can’t compete with Apple and Google’s machine learning prowess. The Google Pixel 3a still takes excellent photos in low light, though the iPhone SE is lacking here a little here too.

There’s also a macro lens here, but it doesn’t have its own autofocus. You can achieve some good results with some work, but it seems like a feature that most people won’t use.

The trade-off of lower-performance chipsets and lower-resolution displays is usually a longer battery life. Combined that with the fact that the Galaxy A51 already has a 4,000mAh battery, you’ll get over a day of even relatively heavy use. I was easily able to get through part of the next day too, and I suspect most people will have a similar experience.

Unlike some other phones in this price range, the Samsung Galaxy A51 does not offer wireless charging. It does have 15-watt fast-charging, which is on the slow side for that tech.

The Samsung Galaxy A51 costs $400 which, as mentioned, puts it in the same price range as the likes of the iPhone SE, Google Pixel 3a, and Motorola Moto G Stylus. The device is available through the Samsung website, as well as Verizon and Sprint. Verizon is actually offering the phone for $10 per month for 24 months, bringing the total down to only $240.

The warranty on the phone is a pretty standard 1-year deal for manufacturer defects — so don’t expect to return the phone if you drop it and the screen cracks. If you’re hoping for a discount, take a look at the best smartphone deals and best Samsung Galaxy deals available today.

The Samsung Galaxy A51 is a solid phone, but it’s up against some even more solid competition. That, however, doesn’t make this a bad option. With a great display, modern design, and decent camera performance in the right conditions, the Galaxy A51 does have a lot to offer.

It’s worth noting that while the Galaxy A51 has an official MSRP of $399, it can be found for less at online retailers. It becomes a more attractive option if you can pick it up for less than $300, which is sometimes possible.

The Galaxy A51 may have a lot to offer, but others offer more. If you’re willing to switch to iOS, the iPhone SE offers much better performance. That’s the best option for most. If you want to stick in the Android ecosystem, then I recommend going for the OnePlus Nord or Google Pixel 3a or better yet, waiting for the Pixel 4a.

The Galaxy A51 should last for two years, but it will likely feel slow toward the end of that tenure. It doesn’t have an official IP rating, so if you drop it in water, you may be out of luck. Thanks to the plastic backing, if you drop it at the right angle, it should survive — but drop it on the screen, and you may get some cracks, as true with any modern smartphone.