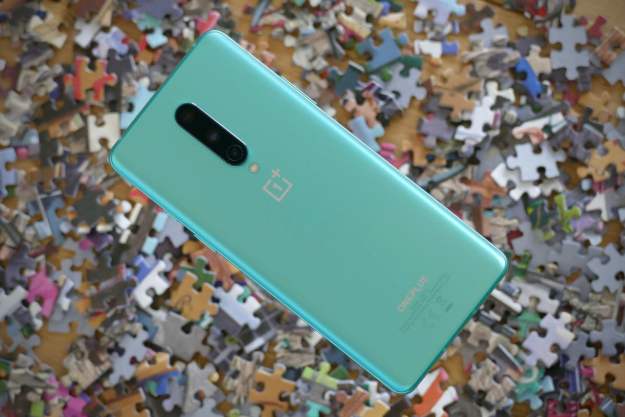 “The OnePlus 8 does everything you want it to and is a great daily partner, but fails to deliver a standout reason to buy.”

The $600 OnePlus 7T was an easy phone to recommend, but will history repeat itself with the OnePlus 8 Pro? You’re going to have to spend an additional $100 over last year’s phone to get one, as it now starts at $700. To justify an increase, the OnePlus 8 needs to step up its game considerably, as it will have to compete with a lot of other highly capable phones.

My time spent with the OnePlus 8 shows it struggles to do so, because the addition of 5G simply isn’t widely available enough yet to be called a must-have.

The OnePlus 8 looks almost identical to the OnePlus 8 Pro — just a little smaller, a bit thinner, and a bit lighter. This makes a big difference in terms of carrying the phone around and using it with one hand. Unlike choosing the 5.8-inch iPhone 11 Pro over the 6.5-inch iPhone 11 Pro Max, the screen size trade-off isn’t so major. The OnePlus 8’s 6.55-inch Fluid AMOLED screen never feels like a compromise compared to the 6.78-inch OnePlus 8 Pro’s.

At 180 grams, the OnePlus 8 is light for a modern smartphone. I like the 20:9 aspect ratio paired with the 8mm thick body, because it allows me to stretch my thumb over the screen easily. The side buttons are also easier to reach and press on the OnePlus 8 than on the 8 Pro. There is a fingerprint sensor under the screen, and although it’s lightning quick, the face unlock had usually unlocked the screen before I got to it.

I love the feel of the matte Gorilla Glass finish, which is cool to the touch and resists picking up too many fingerprints, yet still neatly catches the light — especially in the stunning green color pictured above. Yes, it’s green, but in different lighting conditions it becomes a wonderful aquamarine blue, as you can see in our photos below. The curved corners and low weight mean it sits comfortably in your palm. However, the edges of the body are still sharply tapered, so fatigue will set in when the phone is gripped tightly.

On the back, the camera bump is not overly pronounced, and fewer sensors means it looks less cluttered too. The decision to use a punch-hole selfie camera instead of a complicated and heavy motorized selfie camera has a similar result on the front, keeping it neat and functional. The OnePlus 8 is sleek and chic, without unnecessary bulk, yet doesn’t ignore the need for a big screen. It’s just right.

While the OnePlus 8 fares better than the OnePlus 8 Pro in design and size, the story isn’t so simple when we get to the technology inside, starting with the screen. The OnePlus 8 has a 2400 x 1080 pixel resolution Fluid AMOLED screen and a 90Hz refresh rate, but does without the motion-smoothing feature. Put them alongside each other and there is a subtle difference, with the OnePlus 8 Pro looking ever so slightly sharper, smoother, and more attractive.

Yet it’s not like the OnePlus 8 looks bad — far from it. Play a 1080p, HDR10 film and it’s still excellent, while video is enjoyable and immersive. This is helped by the dual speakers and Dolby Atmos support. Worried about the missing motion-smoothing feature? Don’t be. While it’s sometimes effective at artificially reducing blur when watching video, the effect is not always desirable. I didn’t miss it. I experienced fewer touch -sensitivity problems on the OnePlus 8, too.

The lower resolution means a lower pixel density. The 402 pixel-per-inch (PPI) rating on the OnePlus 8 is significantly lower than the OnePlus 8 Pro’s 513 PPI, the Galaxy S20 Plus’s 525 PPI, and the smaller iPhone 11 Pro’s 458 PPI. It’s not as stunning to look at as any of these phones, and consequently doesn’t qualify as high quality or premium. That’s where the OnePlus 8 Pro really excels, and where cost-cutting has affected the OnePlus 8. It’s good, but not a reason to buy, like it is on the OnePlus 8 Pro.

I’m pleased to say the OnePlus 8’s software experience, which consists of its own OxygenOS 10.5 user interface built on Android 10, is identical to the OnePlus 8 Pro. It’s excellent, with a slick design, tons of speed, and only minor annoyances. I go into more detail in my review of the OnePlus 8 Pro.

The cost-cutting continues with the camera. Gone is the new Sony IMX689 sensor headlining the OnePlus 8 Pro. In its place is the trusty IMX586 sensor we’ve seen many times before, with an f/1.75 aperture, optical and electronic image stabilization, and the ability to shoot 4K video at 60fps. It’s joined by a 16-megapixel wide-angle lens and a 2-megapixel macro camera.

It takes very pleasant pictures, but it won’t astound with incredible, eye-popping images. My Gallery ended up with solid, dependably decent photos, but nothing I was especially proud of. The IMX586 needs good software tuning to get the most from it, and that’s where OnePlus is at the top of its game. The colors pop, the dynamic range is strong, and the HDR is effective. The portrait mode has good edge detection, but does take a few moments to capture its subject.

Use the OnePlus 8’s camera to take regular, everyday shots, and you’ll be happy with the results. The 16-megapixel selfie camera is good, but not as good as the competition. The macro camera lacks color and definition, night mode isn’t great in very low light, and there’s no optical zoom feature. You don’t get the bizarre Color Filter lens on the OnePlus 8 Pro, which inverts the colors in your photos for a really odd look, but that’s not a bad thing.

To wrap up, the OnePlus 8’s camera doesn’t stand out. There is no key special new feature, whether it’s a successful software-driven enhancement like Samsung’s Single Take mode or Apple’s excellent Deep Fusion technology, or something like 8K video recording or a periscope zoom like the Huawei P40 Pro.

Qualcomm Snapdragon 865 processor drives the OnePlus 8. It has a 5G modem and a choice of either 8GB or 12GB of RAM. The chip and 5G modem are likely the main reason the phone’s price has gone up, but 5G remains unavailable in many places, meaning you’ll be paying more for something you can’t use. This will change over time; but for now it’s hard to recommend most people buy a 5G phone. I’ve been testing the 12GB version, and the benchmark results are as follows:

The performance is equal to that of the OnePlus 8 Pro, and therefore beats the Galaxy S20 Plus and the Oppo Find X2 Pro, as well. Calls have been clear and reliable, although I have not been able to test out the 5G connection. I played a lot of the vertically scrolling shooter 1945, which has a high frame rate and takes advantage of the 90Hz screen refresh rate, and I enjoyed it a great deal. DariusBurst has to be played in a smaller window due to the 20:9 aspect ratio screen, but it doesn’t matter, as it’s still exciting to play. Gaming on the OnePlus 8 is similar to the experience on the Galaxy S20 Plus, with the right weight and in-hand comfort for extended play sessions.

The battery inside the OnePlus 8 has a 4,300mAh capacity and is supported by Warp Charge 30T fast charging. It does not have wireless charging, unlike the OnePlus 8 Pro. Warp Charge wired charging is very fast, taking the battery to 50% in about 20 minutes, and on to full charge in a little over an hour in my tests.

During this time of social distancing, the OnePlus 8 has spent most of its time connected to Wi-Fi, making video and voice calls, as well as being used for games, social networking, and video. It has easily lasted a full day even with heavy use. However, try this activity connected to a 5G network, and the battery will suffer. One feature I liked was new smart charge optimization, where the phone learns your charging routine and optimizes charging around it.

Like many people, I put the phone on charge when I go to sleep and then unplug it in the morning. Even after a couple of days use, the OnePlus 8 took the battery to 80% in the first hour, then stopped charging it until an hour or so before I had been waking up. OnePlus says this will help the battery retain its charge for longer, so you can charge it with confidence. The optimization can be turned off if your daily hours are not set though.

The battery, along with the software mentioned before, are two of the strongest reasons to buy the OnePlus 8.

The OnePlus 8 is a good smartphone. It has an attractive screen, a decent camera, great software, and long battery life. I love the design, the matte glass, and the green color. Still, it lacks any feature that makes it stand out. This did not matter on the OnePlus 7T because it cost just $600 — effectively making the price the standout feature. At $700 or $800 the OnePlus 8 does not have another feature to take its place. The OnePlus 8 has left the value segment and needs to step up its game.

The increase in price means the $700/$800 OnePlus 8 is now battling with the $1,000 Samsung Galaxy S20, the $800 Google Pixel 4, and the $700 iPhone 11. All differentiate from the competition better than the OnePlus 8, which lacks a defining trait, despite being strong in most areas.

You can pay less and get a good phone too. The $600 iPhone XR from last year is still a good buy, along with the $500 Asus Zenfone 6 too, and if you can find one, the approximately $450 Realme X2 Pro is still a startlingly good value.

OnePlus has not given the OnePlus 8 an IP68 rating, so it’s splashproof and that’s all. The body is made from glass and therefore may break in the event of a fall. It’s best to put it in a case. OnePlus is good at delivering software updates, and there is plenty of power inside the phone, meaning it has two years use ahead of it at the very minimum. It’s great to have 5G on board too, which will keep it going for even longer.

The increase of $100 over the OnePlus 7T may not sound like much, but 5G’s limited appeal isn’t really enough to justify the extra yet, so we don’t recommend buying the OnePlus 8 despite the fact it’s a decent modern smartphone. There are better choices available at both higher and lower prices.

Topics
Video-editing app LumaFusion to get a Galaxy Tab S8 launch
The best iPhone car mounts in 2023: top 10 best ones you can buy
The best grocery list apps for iPhone and Android in 2023
Samsung Galaxy S23: release date, specs, price, rumors, and news
This is the OnePlus Pad — the OnePlus tablet we’ve waited years for
The best iPhone apps in 2023: 50+ apps you need to download now
The iPhone 15 Pro’s rumored new design is one I can’t wait for
The best folding phones in 2023: our 6 favorite foldables right now
You can finally take ECGs and track AFib on a Garmin smartwatch
I bought a $50 Apple Watch Ultra clone, and it blew me away
Best cheap phones in 2023: our 5 favorite ones for tight budgets
How to get Apple’s Black History Month 2023 wallpapers for your iPhone and Apple Watch
Yes, we really are completely spoiling the OnePlus 11 and Buds Pro 2 launch