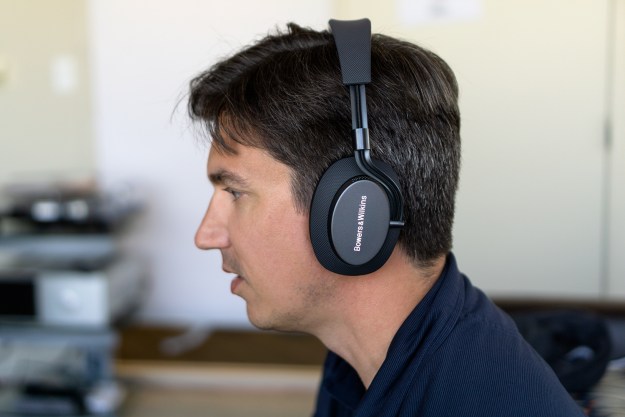 Bowers and Wilkins’ PX headphones, the company’s first pair of noise-canceling Bluetooth cans, were a long time in the making. According to B&W, a big part of that had to do with the lacking sound quality from Bluetooth streaming. But with the implementation of the aptX HD Bluetooth codec, and after a few years spent developing its own noise-canceling tech, the famed British audio company now offers travelers and those who work in noisy offices a truly tech-packed option.

For our review, we pitted the PX against the best noise-cancelling models from Bose and Sony, which currently dominate the market. Are the PX just a pretty face at a premium price, or do they really compete for your dollars?

The PX arrive inside a soft carrying pouch with the Bowers and Wilkins logo on the outside. Opening up the upper flap of the pouch reveals the charcoal-grey headphones within, along with a USB type-C charging cable and 3.5 mm audio cable.

As with every other pair of headphones we’ve tested from the classic British audio manufacturer, the PX are astonishingly good looking. Supple leather and cold metal dominate the exterior of the over-ears, met by sleek texturing on the top of the headband and outer edge of the earcups that exudes class. As far as colors go, a choice of either space grey or soft gold is available. We love the latter, where the gold was subtle enough not to overpower the understated design, but no matter what you choose, you’ll look good.

In terms of sound technology, the PX draw on the acoustic design we first saw in the Bowers and Wilkins P9, especially in the driver units, which sit in angled plates so the drivers naturally point towards the center of each ear for an improved soundstage over traditional driver mounts.

This design helps give the earcups a stiff composite structure, which is also quite light. The drivers are designed to retain their shape, yet still have plenty of room to flex inside the chamber for extra bass. All this was designed to help Bowers and Wilkins carefully tune the PX’s final sound signature.

The PX are astonishingly good looking.

In general, the headphones feel great when they’re on your head. They’re lightweight yet still feel solid, and the headband and ear cups are layered in memory foam covered in smooth leather. There’s a large amount of space between the driver and your ear, and it’s easy to find a great fit. That said, we wished for more cushioning on the band, and we found ourselves adjusting the headband to remove pressure on the top of our head during extended listening sessions. A little more padding up top would go a long way.

The PX don’t fold up, but the cups do rotate to lay almost flat, and the headband is very flexible, making them easy to store. They’re designed to be used wirelessly, but there is a 3.5mm headphone socket for wired use. The battery charges via a USB Type-C connection, and the same port can be used as a digital connection to listen to music from a PC, Mac, or smartphone.

As mentioned, the noise canceling is Bowers and Wilkins’ own, and the company took its time in development, wanting to avoid the drawback of losing the life, verve, and spaciousness often associated with noise canceling. There are no capacitive touch-based controls here like there are on the Sony WH-1000XM2. Instead, the PX’s three noise-canceling modes are engaged via the Bowers and Wilkins Headphones app, including Office, City, and Flight modes. Office provides the least amount of noise cancellation, and Flight the most.

There’s also a transparency mode specifically tuned to let voices through, which varies automatically when you switch cancellation modes, but can also be adjusted manually. This feature is directional, using the microphone array inside the headphones to prioritize voices from people facing the wearer. This means you shouldn’t hear people around you, but someone addressing you directly will come through. The system worked well in practice on a cross-country flight.

Buttons on the outside of the right earcup let you play or pause music and adjust volume, but the headphones also have sensors inside that give the PX a highly intelligent control system. If you lift an ear cup or hang them around your neck, they automatically pause. When you put them back on, they restart your music from where you paused. If you take them off and place them down on a table, the headphones slowly power down into a deep sleep mode to extend battery life.

Used continuously, the PX headphones should return 22 hours before needing a recharge, which measured about right in heavy use. Under normal use conditions where they’re paused and removed repeatedly, this should extend to as much as 50 hours. This grants the PX among the longest-lasting battery life of any noise-canceling headphones we’ve reviewed.

As with most Bluetooth headphones in 2018, pairing was a cinch. Just press down on the Bluetooth pairing button on the bottom of the right earphone and find the PX on your phone or other device. Quick and painless. As referenced above, you’ll also want to be sure and download the Bowers & Wilkins Headphones app for iOS or Android to control basic functions like noise cancelling modes.

Our initial hands-on with the PX took place in an already quiet room, but conversation was instantly removed from the headphones using the noise-canceling Flight mode, and moderately audible using Office mode. After turning the transparency mode up, when facing someone speaking to us, the voice came through very clearly. When used on flights, the headphones do an excellent job combating the noisy environment.

While there is a slight difference in the sound signature with noise cancellation switched on, it’s minimal, showing what a great job Bowers and Wilkins has done with the technology. With noise canceling switched off, the headphones have a rich, subtle sound to them.

The midrange response is prominent, and the soundstage very wide and airy. Subtleties in the music aren’t lost when noise cancellation is switched on, with the strumming and slapping of strings in an acoustic guitar-heavy piece sounding very realistic.

The headphones have a rich, subtle sound signature.

In general, the PX have a warm and round sound profile that is best suited to punchy classic rock like Neil Young’s Harvest or The Beatles’ Abbey Road. When playing modern hip-hop and electronic music through the headphones, they tend to lean into the low-midrange, but never so much that it eschews the overall audio performance. You get what you pay for here in terms of sound quality — the PX just tend towards the darker side of the sound signature when it comes to voicing.

Bowers and Wilkins likes to tout its use of the aptX HD codec inside the PX, which it considers the best possible wireless sound format available. AptX HD is excellent, and we found the audio quality when streaming from our OnePlus 6 to be superb. That said, it should be noted that only select phones will benefit from the technology, not including iOS devices.

Bowers and Wilkins offers a two-year warranty on all headphones, covering defective parts or workmanship.

Bose’s QC35 and the Sony WH-1000x series (including the just-released 1000xM3) sit atop the pile of noise canceling headphones for good reason: Both pairs offer superb ambient noise reduction and fantastic sound. When compared to the PX, though the cost a bit more, we prefer the warm sound signature of the PX to the QC 35, though they aren’t as great at blocking out the outside world.

That said, when it comes combining top-notch noise-canceling with great sound, the WH-1000x M2 remain the undisputed king in our book. Their lower list price also makes them a bit more enticing than the PX. Then again, the PX offer better looks than the decidedly business-like 1000x, and that’s something many will be willing to pay for.

Bowers and Wilkins has a long track record of making some of the best and longest-lasting audio products in the world, and we expect nothing less from the PX headphones.

If you’re after a pair of noise-canceling headphones with a bit more style than the top picks from Bose or Sony — and you don’t mind spending a bit more money to get it — the PX are absolutely worth considering. While they don’t rank as our favorite noise-canceling option for your money, great style, sound, and functionality make them serious contenders.