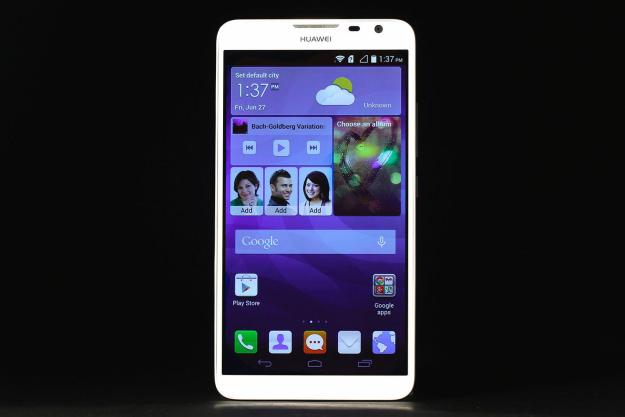 “With a massive 6.1-inch screen and a battery to match, the Huawei Ascend Mate 2 has plenty to offer, even if its size and middling specs will turn some would-be buyers away.”

As more and more flagship smartphones grow to phablet size, those longing for ever-bigger screens look toward giant handsets like the Huawei Ascend Mate 2. The phablet looks and feels like the Samsung Galaxy Note 2, but at 6.1 inches, it’s a whole lot bigger than that early behemoth. That still makes it slightly smaller than the Samsung Galaxy Mega, but bigger than the Note 3.

In the past year, Huawei has trail blazed its way into the U.S. smartphone market with devices like the Ascend P7, but the Mate 2 is the first smartphone from the Chinese company to reach America through the Huawei online store. Phablet fans will celebrate its arrival for the larger screen alone, but is that enough to stand out alongside brand-name phablets from Samsung and LG?

Plain design and hard to handle

The Huawei Ascend Mate 2 is not the most beautiful phone we’ve ever seen, to say the least. Its rather plain design reminds us of the similarly bland Samsung Galaxy Note 2, especially the the metal band along the edge and the plain, white back.

As with most phablets, the power button is located on the right-hand side below the volume buttons for easy access. The headphone jack is on the top of the device, while the micro USB is on the bottom. Huawei placed the speaker grill on the back, which can be problematic; it gets muffled against the tabletop when listening to music, watching videos, or making calls using speakerphone.

The slightly glossy plastic back attracts fingerprints and random debris, but doesn’t slide off the table like the glass-backed Ascend P7. Overall, the design falls flat and leaves the user with the impression that Huawei didn’t put too much effort into making it stand out.

As far as the feel of a phone this big, we predictably found it much too large to hold comfortably in one hand, and nigh impossible to navigate without both hands in play. Just the week before, we had used the 5.5-inch LG G3 and had no such problem. However, the Mate 2 is quite a bit wider and the screen is more than half an inch bigger.

That said, when it comes to phablets, it’s really a matter of taste and hand size. Some of us just don’t have the mitts for this phone.

The Mate 2 runs Android 4.3 with Huawei’s Emotion UI 2.0, which effectively covers up Android and makes for a user experience that’s closer to iOS 7. There’s no app drawer, so apps range across your home screens instead. Fortunately, you still get all the perks associated with Android, such as Google Now, and the company’s full app suite.

Just like on the Ascend P7, you can really make the Mate 2 look the way you want by choosing from several different themes. Each one makes the wallpaper and app icons look completely different. Of course, you can also customize the phone even more with keyboard apps, clock widgets, and more from the Google Play store.

Mid-range specs do the job well

The most impressive thing about the Mate 2 is its massive 6.1-inch screen. For those of you who’ve been dreaming about a giant phablet, this screen is a great development.

The incredible battery life alone is reason enough to buy this phablet.

Unfortunately, it only has a 1,280 x 720 pixel resolution, so it’s not Full HD or Quad HD like most high-end smartphones. Colors look softer and images are less sharp than they are on Full HD screens, so if you’re planning to watch movies, TV shows, or YouTube videos on your phablet, the Mate 2’s screen could disappoint. That said, the resolution isn’t noticeable in other applications, so unless you’re a pixel snob, the Mate 2’s screen probably won’t offend you too much. The sheer size of the screen makes it an ideal productivity device for activities like reading e-books, articles, and checking email.

Huawei packed a quad-core Qualcomm MSM8928 processor under the hood, which clocks in at 1.6GHz. There’s also 2GB RAM to keep things going. We didn’t experience any noticeable lag while using the Mate 2.

In the Quadrant benchmark test, the Mate 2 received a score of 11,194, which is much lower than the 22,270 Samsung’s Galaxy Note 3 scored on the same test. The Mate 2 also performed much worse than Samsung’s phablet in the 3D Mark Ice Storm Unlimited test. It only got 4,838 points in comparison with the Note 3’s impressive 18,873 points.

Benchmarks aren’t everything, though and we found the Mate 2 very responsive during our tests. YouTube videos loaded lighting fast and played without a hitch. Internet searches were also speedy and apps booted up quickly. We had no complaints with the Mate 2’s processing power.

The Mate 2 also has 16GB of storage onboard, which can be expanded via MicoSD card up to 32GB. That’s certainly good news for those of you who like to download tons of music and movies on your smartphones. In terms of connectivity, the phablet also has Bluetooth 4.0, Wi-Fi, and 4G LTE.

No skimping on imaging

When it comes to cameras, Huawei really made an effort. The phablet has a high-resolution, 13-megapixel camera on the back with Sony BSI Auto-Focus, a F2.2 aperture, and a 28-millimeter focal lens. It can also capture 1080p video.

In our testing, we found that the back camera didn’t quite live up to all the hype. Shots were often overexposed, especially under the noonday sun. The camera did focus very quickly, though, and the details were crisp in every shot. Overall, the Mate 2 has a decent shooter and the photos have more resolution than those taken with other cameras.

The front-facing camera packs 5 megapixels, which is quite high for a front camera. Huawei says it’s great for selfies and group shots because of its 88-degree wide angle, panoramic mode, which can capture more background in the shot and more people in your group.

Like the Ascend P7, the Mate 2 has a beauty feature, which airbrushes away any unattractive details. If you put it up to the top setting, though, you end up looking too perfect to be human.

Calls made with the Mate 2 were clear and data speeds were normal. We didn’t experience any hiccups with either of these basic functions.

Huawei packed a truly massive 3,900mAh battery under the Mate 2’s thin plastic back. That’s even larger than the one found on Samsung’s Galaxy Note 3, and it’s meant to keep the massive phablet going for a very long time on a single charge. And we mean a very, very, very long time.

In our tests, we found that the Mate 2 can keep on going for almost 16 hours on a single charge – and that’s if you use it heavily. If you let the phone idle and don’t use it that much, it can stay charged for two full days. The Huawei Ascend Mate 2 offers the best battery life of any phablet we’ve tested, which begs the question, why aren’t other manufacturers doing this?

The Huawei Ascend Mate 2 won’t be universally loved, mainly because its screen size is controversial and it isn’t exactly a high-end device on paper. However, the Mate 2 proves that a smartphone doesn’t necessarily have to come with the latest and greatest specs to be ahead of the curve. The incredible battery life alone is reason enough to buy this phablet.

In the end, it really comes down to personal preference. If you love smartphones with 6-inch-plus screens, you’ll really like the Mate 2.

That said, it looks as though Huawei plans to unveil the Mate 3 soon, which should have a sharper 1080p screen, faster processor and RAM, as well as a new look. If the lower resolution screen on the Mate 2 bothers you, you might want to wait for the Mate 3, which should debut at IFA in early September. Samsung’s Galaxy Note 4 is also expected to arrive then, so you’ll have a tough decision to make.

Topics
Video-editing app LumaFusion to get a Galaxy Tab S8 launch
The best smartphone stocking stuffers for the 2022 holidays
When is my phone getting Android 13? Google, Samsung, OnePlus, and more
Best Black Friday iPad Deals: iPad Air, iPad Mini, iPad Pro
The best Android phones in 2022: Samsung, Google, and more
Save $200 on the Samsung Galaxy Tab S7+ with S Pen for Cyber Monday
Don’t buy the wrong iPad during Cyber Monday — get this one instead
Samsung’s Galaxy Buds earbuds line is discounted for Cyber Monday
Audible Cyber Monday deal drops the price of Premium by 60%
This is your last chance to get 3 months of Kindle Unlimited for just $1
My favorite iPhone MagSafe in-car holders are Cyber Monday bargains
Surprisingly, the iPhone 14 Pro can’t win this epic camera shootout
5 things that would make the Google Pixel Fold next year’s best foldable