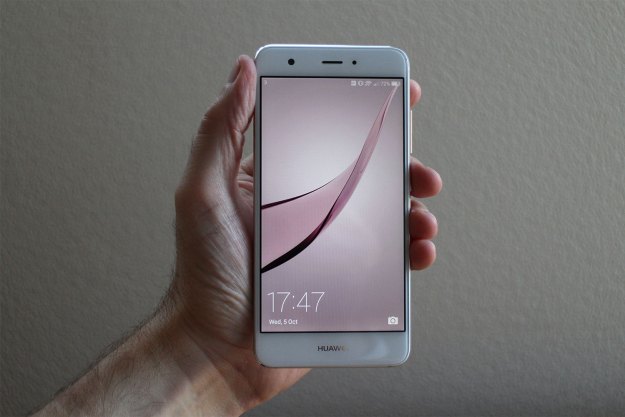 “Huawei’s perfectly pocketable Nova is a gorgeous phone, but it’s too expensive.”

If it’s always Saturday night for you, then carrying around a massive smartphone can be a pain. Unsightly bulges in your pocket ruin the look of your outfit, and if you’re a guy, could get you mistakenly thrown out of places due to lewd behaviour. Where do you turn when convenience, style, and pocketability is the driving force behind your choice of smartphone? Check out the Huawei Nova series.

The Nova is a 5-inch Android smartphone with sleek looks and a compact metal body that easily slips into the pocket of your jeans. Huawei packed the Nova with solid tech, though its bigger brother, the Nova Plus, is slightly more high spec.

Huawei says the Nova series phones are mid-range, so they cost less than the flagship P9. However, the price tag isn’t quite low enough to compete with flagship killers like the OnePlus 3, ZTE Axon 7, and Huawei’s own Honor 8. Can the Nova compete? Is style enough to turn heads in its direction? We’ve had the Nova and Nova Plus in and out of our jeans pocket for a week to find out.

Oh, it’s so pretty. Huawei has proven it knows how to produce a great looking, sensibly sized smartphone with the Huawei P8 and the Huawei P9, and now, the Nova. It has a metal unibody and a curved 2.5D pane of glass over the front, with beautifully rounded edges to make it superbly easy and comfortable to hold. The Nova is perfectly pocketable and drop dead gorgeous.

Examine the phone more closely, and you’ll spot the brushed metal effect along the sides, the smooth metal finish on the rear, and the plastic section that runs along the top of the phone — white on our silver phone — that recalls both the Huawei 6P and the P9. The circular fingerprint sensor sits on the rear panel, leaving the front piece almost completely devoid of detail, aside from the speaker, front camera lens, and ambient light sensor. It looks great.

Just as big phones are getting physically smaller, smaller phones are also getting more compact, and the Nova is just about the right size for a non-phablet smartphone. It’s quickly forgotten in a pocket, light enough that it’s never bothersome, yet absolutely gorgeous when it’s out on display. Huawei got it exactly right with the look of the Nova.

All this talk of compact bodies may make you think the Nova has a screen smaller than 5-inches, but that’s not the case. It’s exactly 5-inches, and the LCD-IPS display has a 1,920 x 1,080 pixel resolution. You really wouldn’t want any less from a modern smartphone. It’s the tiny bezels that keep the overall size of the phone down, and they are super slim on the Nova.

The Nova is drop dead gorgeous.

On the screen, black levels are excellent, text is clear, and colors are reproduced with high contrast, so images stand out crisply. We’ll come to the camera later on, but the display deals with color in the same manner — vivid and bright. It’s not subtle, but it looks awesome.

Android 6.0 Marshmallow is installed with Huawei’s EMUI 4.1 user interface over the top. That means there’s no app tray and all app icons are spread across multiple homescreens, plus there are various other changes to standard Android. These include a revised notification drawer, which is split into two sections: notifications and messages, then a left swipe to shortcuts such as Wi-Fi, screen brightness, and Bluetooth.

Some of the changes are great. Notifications are interactive, and when you tap them, you’ll get quick-access shortcuts. However, there are many pre-installed apps, including booking.com, WPS Office, News Republic, and various games. Luckily, they can be uninstalled. Huawei has its own Phone Manager for “optimization” tasks including cleaning up junk files, closing background apps, and checking on data usage. There’s also a weather app, a mirror app, an FM radio, a voice recorder, an email app, and several other generic Huawei-produced apps, most of which can be uninstalled.

Huawei’s Swype keyboard is the default on the Nova, but it’s very annoying, so we recommend switching to Google’s own keyboard or another alternative. The Swype keyboard has an odd space bar. It’s just too small, and I was forever tapping the full stop instead, making.sentences.look.like.this. It was extremely annoying.

There are a few fun shortcuts and additions to balance out the hateful keyboard. You can pinch the screen to get a hidden menu to squirrel away rarely used apps, for example. Huawei’s Knuckle Sense feature is helpful, too. You can use your knuckle to draw letters on the screen, activating shortcuts to apps, or certain features. Is Knuckle Sense an essential feature? No, not even close, but it’s way more useful than it was in previous Huawei phones. We also like a new blue light filter that makes the screen more comfortable to read at night, and a handy pull-up shortcut menu on the lock screen.

Overall system speed is also acceptable, and the Nova quickly slides through menus and options, making general operation a breeze. Over time, Huawei’s EMUI hasn’t always continued to perform so well — with some slowdown and pauses becoming evident when the memory nears capacity — but certainly at the start of its life, the Nova is a pleasure to use. Remember, this isn’t a phone for the productivity fiend, it’s for selfie-taking, casual game-playing funsters. And for them, it’s not going to cause any problems.

The Nova’s battery life is excellent.  Although it has a 3,040mAh battery, it’s driving a relatively small screen at 1080p, so it lasts longer than you may expect. Huawei says two days of regular use should be achievable on the Nova, and we had the same experience. I used a few apps, did some social networking, and took a lot of pictures for a day, then left it on standby overnight. I returned to it with 61 percent still showing on the battery meter. That’s pretty good for a small smartphone.

Qualcomm’s new Snapdragon 625 chip is inside — it’s more frugal with battery power than older chips and it’s faster — with 3GB of RAM, and 32GB of storage space. Running an AnTuTu 3S benchmark returned a 63,822 score, Quadrant gave it 5,831, but 3DMark weirdly refused to work. In the real world, it plays games very competently, and won’t disappoint the casual player. Those are decent benchmarks for a mid-range phone, though much lower than what you’d get from a flagship phone or even the OnePlus 3.

A fingerprint sensor keeps the Nova secure, and wakes the phone from a black screen almost instantly. We found it to be extremely reliable, with very few misreads, and those that did occur were down to our finger placement rather than any accuracy concerns. There’s NFC on board, too, so it’ll happily work with Android Pay. It’s slightly concerning that it’s only Android 6.0 installed, and not even the most up to date version of Marshmallow, either, but an update to Android Nougat will likely be coming in the future. Huawei is never the fastest to send out updates, unfortunately, so if you care about security and timely updates, you need not apply.

Since the P9, we’ve expected great things from Huawei’s cameras. The Nova shows it wasn’t a fluke that the P9 had such a great camera. The rear cam has 12-megapixels and more importantly, a 1.25 micrometer pixel size. The bigger the pixel, the better the quality, says Huawei. It shows. Point the Nova at a landscape and it takes expansive, colourful, and sharp pictures. We took a few photos back-to-back with the LG V20, which is known for its amazing cameras, and the Nova took photos that were nearly as attractive as the V20’s.

The differences arrive in low light, thanks to the f/2.2 aperture on the Nova. It’s low-light performance isn’t that great and photos turned out much less clearly at night. There are also fewer camera modes, a less cohesive and enjoyable user interface, and of course, none of the monochrome or bokeh effects you’d find on the P9.

Swap to the selfie cam and you’ll get 8-megapixel shots. The Oppo F1 has similar selfie-centric ambitions in the mid-range selfie cam space, and although the Nova takes decent pictures with the front cam, they’re not spectacular. The Perfect Selfie mode is helpful, though, combining several key shots to ensure your face always looks its (fake) best, and there’s a fun-but-pointless Mirror mode that even hazes over when you blow on the screen.

Huawei really talks up the selfie cam on the Nova, and although it’s not a disappointment, there’s nothing that makes it special. The rear cam is good, and we’ve been pleased with the photos taken with the Nova.

Huawei described the Nova (and its larger sister phone, the Nova Plus) as global devices, but hasn’t confirmed they will launch in the U.S. For now, you can get the Nova in the U.K., parts of Europe, and other regions. Huawei warranties are different in the U.K. than the U.S.. In the U.K., a Huawei device gets 24-months coverage, with six months for the battery and charger, plus only three months for the earphones.

If you’ve messed around with the insides of the phone, dunked it in water, or otherwise ruined it, you won’t be covered. If that’s not the case, Huawei will require it to be sent back to a service center for evaluation and repair/replacement. In the U.S., Huawei offers the same type or warranty but for a year. If the Nova does get a U.S. release, then it’s likely this will apply.

Huawei is targeting the mid-range with the Nova. Those who aren’t prepared to spend a lot on a P9, a Galaxy S7, or an LG G5 will want to consider the Nova.

However, price almost always dictates success in the mid-range. Huawei misjudged the cost terribly and made the Nova too expensive. It costs 400 euros, or around 350 British pounds/$450, so we can’t recommend it.

Then we come to the real problem. The ZTE Axon 7 and the OnePlus 3. These are flagship phones, with stronger processors, bigger screens, and better cameras. Both can be purchased for $400 or less than 350 British pounds. If $400 is your budget, buy the Axon 7 or OnePlus 3 instead. If you need a cheaper phone, look at the Axon 7 Mini or the Moto G4 Plus.

The Nova is a mid-range phone, so it doesn’t have the same longevity of a flagship phone. It should last you at least two years, but the lack of timely Android updates is a concern.

No. Although the Nova is a great phone, it’s simply overpriced. If it cost $300, it would be worth considering, but at 400 euros, it’s way off the mark. No matter how much you value style, no one wants to overpay for a smartphone, and that’s what you’ll do with the Nova. Game over, Huawei.