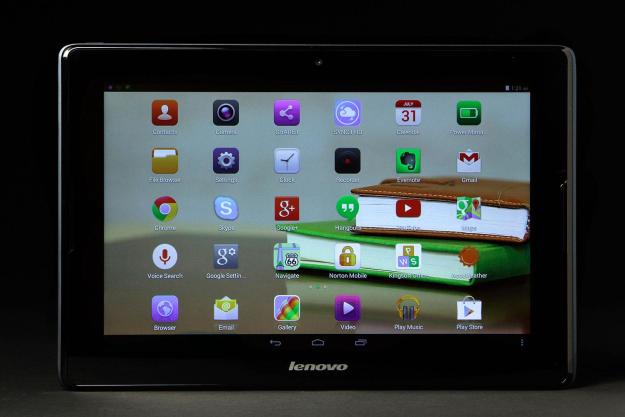 “Lenovo’s A10’s IPS screen is larger than most budget tablets. Performance and audio playback are also pretty good. But the screen’s resolution is low for a tablet this size, resulting in noticeable fuzziness.”

Everyone’s pushing budget tablet these days. There’s Acer’s Iconia One 7, Dell’s Venue 8 (and 7), Asus’ Memo Pad HD, HP’s 7 Plus, and a slew of other slates aimed at consumers who don’t want to spend a lot of money.

But most of these budget tablets stick to sub-10-inch displays. Lenovo, as it has been known to do, is attempting to cover all the bases with its latest A Series budget line. It offers up a 7-inch A7, an 8-inch A8, and the 10-inch A10 we’re looking at here, which has an MSRP of $299, but is already available for as low as $230 (at Best Buy).

The A10 is a decent performer with better-than-expected speakers and a colorful IPS display. Its main drawback is its relatively low-res (1,280 x 800) screen. That resolution isn’t so much of an issue on smaller slates, but here it results in noticeably fuzzy details and text.

Aside from the glass front, the shell of the A10 is a decidedly plastic affair. But the back is a pleasant soft-touch plastic (not unlike the Nexus 7), and the tablet as a whole feels solid. There are, though, two separate bezels, which lets Lenovo add front-facing speakers (more on that later), but detracts from the tablet’s looks.

The left edge (in landscape orientation) houses a MicroSD card slot behind a door, a Micro USB connector for data and charging, and a slim volume rocker. A small power button and pinhole microphone hole live around the corner on the top left edge.

The back is a pleasant dark blue that looks black unless you’re in bright light, and the rear is adorned with both Lenovo and Dolby logos.

Android is up-to-date, but skinned

The A10 ships with Android 4.2, but an update is available that bumps it up to KitKat (4.4.2). Lenovo adds its own skin, which makes things look cartoonish, and seems designed to make the OS feel simpler.

The problem is, the app drawer has been hidden. So, not unlike iOS, every app you install gets dumped onto one of three home screens. This easily leads to disorganization and clutter, although you can drag apps on top of one another and create folders, which helps.

There are also some pre-installed apps, although Lenovo didn’t go overboard here. They including things like Evernote, Kingsoft Office, AccuWeather, and a link to Norton Mobile, as well as a few Lenovo sharing and cloud apps. We were also able to uninstall most of these without issue, although the tablet did balk when we tried to ditch some of Acer’s apps.

As we mentioned earlier, the A10 has Dolby-branded front-facing speakers on either side of the screen. The speakers get reasonably loud and sound pretty good for a budget device, although there is some distortion at max volume. And lows sound a little muddy.

The screen is also a bit of a mixed bag. It’s an IPS panel, which is a nice touch, given its size and the tablet’s price. Colors are vivid and viewing angles are good, although at extreme angles, you can see what appears to be a small gap between the glass and the screen.

The real issue is resolution. The screen’s 1,280 x 800 looks isn’t bad on a 7-inch tablet, and is probably fine on the A8 (which shares the same resolution). Here, though, the edges of icons look fuzzy, and small text doesn’t look sharp. Still, everything is easily readable, and we have been spoiled lately by high-end tablets, like Samsung’s Galaxy Tab S.

If you haven’t used a high-end tablet before, the A10’s screen may not turn you off. But it should be noted that if you’re okay with a smaller screen, Google’s Nexus 7 offers up a whole lot more pixels (1080p) for the same price.

We honestly weren’t expecting much from the tablet’s quad-core MediaTek processor (clocked at 1.3GHz), 1GB of RAM, and 16GB of internal storage.

We did note a couple of crashes during, but otherwise, the A10 felt reasonably quick and stable.

But the tablet didn’t feel sluggish in general use, from Web browsing, to installing and running apps. We were even able to play the graphically demanding game “Archangel” without issue. We did note a couple of crashes during testing (once the Play store crashed when attempting to update several apps), but otherwise, the A10 felt reasonably quick and stable for a budget-priced big-screen tablet.

We don’t put much stock in tablet benchmarks, but to provide some perspective, the A10 scored 8,525 in the Quadrant benchmark, and 2,868 in 3DMark’s Ice Storm Unlimited. Acer’s smaller, Intel-powered Iconia One 7 scored 5,125 in Quadrant, and 6,065 in 3DMark. That indicates that the smaller Acer tablet should be much better at gaming, but we didn’t notice any slowdowns when gaming on the A10.

Photos taken with the tablet’s rear-facing 5-megapixel camera look decent (though a little dark) when viewed on the tablet’s screen. But dump them off onto a computer monitor or TV to look at them at full resolution, and they’re full of noise, with varying colored pixels interspersed through objects that should be a single color.

Again, you won’t notice this as much if you stick to viewing photos on the tablet’s sub-1080p screen. But viewed full size, photos generally look awful, almost as if they’ve been (poorly) interpolated up from a lower-resolution image.

If you’re interested in video chats and selfies, the 2-megapixel front-facing camera will get the job done.

Lenovo says the A10 should last about 9 hours on a charge, and that doesn’t sound too far off. The tablet made it through two days of intermittent testing, benchmarking, and some gaming and video streaming before needing a recharge. Unless you use the device constantly, the battery should get you through the day.

The A10 also seems to hold onto its charge pretty well, too, which important for those who don’t use their tablet every day. After being fully charged and unplugged, we neglected it for a week. When we picked it back up and powered on the screen, it was still nearly 70 percent charged.

If you’re looking for a low-priced 10-inch tablet and you’re fine with a low-resolution screen, Lenovo’s A10 is a decent choice with an IPS screen and good speakers (for a budget slate).

But if you’re willing to drop down in screen sizes, there are better choices available at similar price points. Google’s Nexus 7 may be more than a year old now, but it still has a nicer, 1080p IPS screen than the A10, as well as a much better (stock) version of Android KitKat for the same $229.

Likewise, the Kindle Fire HDX also starts at $229 (with lock screen ads) and has a better screen and a more premium feel than the A10. But of course, if you opt for Amazon, you lose access to the Google Play store. And while Amazon’s app store is better than it used to be, there are still plenty of games and apps that never make it to Amazon’s ecosystem.