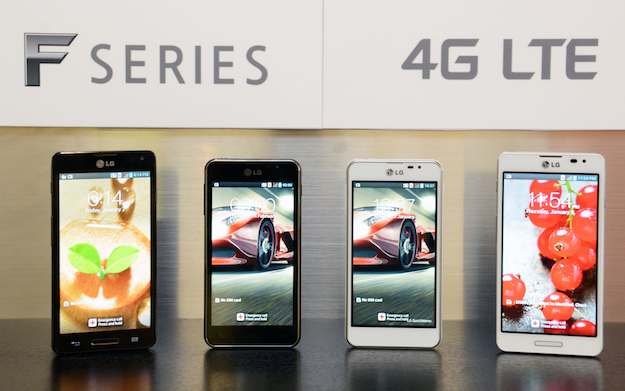 LG just can’t hold itself back, can it? It has already shouted about the Optimus G Pro and the L Series II range, all of which are expected to be at MWC 2013, then earlier this week it produced a teaser video which included hints of an F Series. Now, just a few days later, it has announced the new F Series phones as well. Patience, LG, is a virtue.

So what have we got? LG had already vaguely confirmed the F Series range of devices would bring 4G LTE connectivity to the masses – which means mid-range phones at a sensible price, and sure enough that’s exactly what the Optimus F5 and Optimus F7 should do.

The Optimus F7 is the more powerful of the two, as it’s equipped with a 1.5GHz dual-core processor of unknown heritage, plus 2GB of RAM and 8GB of storage space. The screen is a big 4.7-inch True HD IPS panel and it displays Android 4.1.2 as its operating system, along with several LG UI tweaks. The feature list continues with the now ubiquitous 8-megapixel camera, a 2540mAh battery, a microSD card slot and a front-facing video call camera with 1.3-megapixels.

Moving on to the Optimus F5, it has to make do with a 1.2GHz dual-core processor, 1GB of RAM and a 4.3-inch display, which won’t share the F7’s high definition resolution. The operating system is the same though, but the camera has been dropped to 5-megapixels on the back of the phone, while the front camera stays at 1.3-megapixels. There will be 8GB of memory inside the phone, plus it’ll take a microSD card, and the battery is a generous 2150mAh cell.

Both phones have 4G LTE connectivity and LG makes a point of talking about worldwide distribution for the F Series, so most bands should be supported. The Optimus F5 will go on sale in Europe sometime after March and before the summer, while the F7 will come soon afterwards. LG will have the F Series phones on display at Mobile World Congress, at which time we hope to get confirmed release dates, a more complete spec list and an idea of the prices, which are the final pieces of the F Series puzzle.